Heroes in Crisis #3 is mean-spirited, degrading to the cast of characters and almost insulting to long-term comic book fans.

Heroes in Crisis #3 is mean-spirited, degrading to the cast of characters and almost insulting to long-term comic book fans.

The 3rd issue of Tom King’s miniseries Heroes in Crisis continues in its attempts to reduce some classic heroes and villains into neurotic and desperate sociopaths, and I’m beginning to wonder if the real crisis here is the direction this book is taking.

Heroes in Crisis #3 focuses on Lagoon Boy, The Flash and Booster Gold, and recounts some of the moments just before the massacre at Sanctuary. We see how Sanctuary, the hospital for PTSD heroes and villains, operates when the patients arrive, and though I’m no psychologist, I wonder if the treatment was run past medical professionals by Bats, Supes and Wondy before they opened for business. I would guess no, as it’s just mental and makes no sense.

Using Kryptonian technology, or something, Sanctuary welcomes it’s “guests” with homely looking AI robots, or whatever, and gives them the welcome tour. Apparently, they receive full bed and board here, and when they think they are ready, they can visit “the chambers” where they can be transported to any psychologically disturbing event from their past.

This virtual reality nightmare has been built by Batman from Superman’s tech and with Wonder Woman’s compassion, which was a weird thing to read when the cover of the issue I got had a picture of WW over Maxwell Lord’s dead body.

So we get various flashbacks of the three leads here, and some more gratuitous violence, then Harley Quinn shows up, seemingly  killing Flash with a huge comedy hammer, before saying hi to Booster Gold, who on his first day decided it was a good idea to sit in his own private matrix with a copy of himself that insults and attacks him. 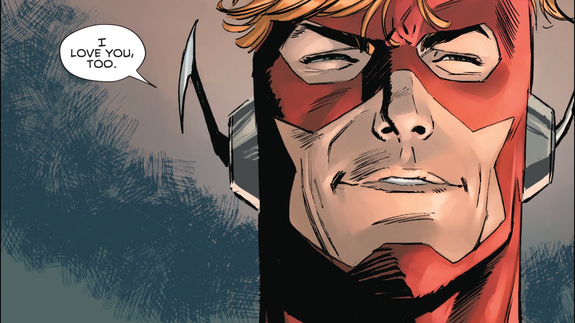 Now if all that sounds weird and muddled, it’s because it is. It’s the 3rd issue of this title and it’s already frustrating and annoying.

The whole premise just doesn’t work. The reason these people are heroes is that they have either incredible powers or skills greater than us mere mortals. They fight the good fight as they know they are doing the right thing. Sure they have tragedy and defeats to contend with, but the reason they are what they are is their ability to rise above those events and triumph anyway, that’s why they are “super”.

They don’t require therapy and virtual reality recreations of their most psychologically damaging past encounters because they are superheroes. This series might as well be Identity Crisis 2, as it’s mean-spirited, degrading to the cast of characters and almost insulting to long-term comic book fans.

On top of this, the excellent Clay Mann only draws two pages of art here, with the rest contributed by Lee Weeks. Why this has happened I’m not sure; maybe someone out there can tell me, but I get the feeling there’s something more going on behind the scenes with this book, than in the actual book itself.