3,407 years ago, the Doctor and Team TARDIS banished Tzim-Sha from the Earth. In “The Battle of Ranskoor Av Kolos”, he’s back as a god, and he’s bent on destroying the Earth and corrupting the Universe.

3,407 years ago, the Doctor and Team TARDIS banished Tzim-Sha from the Earth. In “The Battle of Ranskoor Av Kolos”, he’s back as a god, and he’s bent on destroying the Earth and corrupting the Universe.

This recap of Doctor Who Season 11, Episode 10, “The Battle of Ranskoor Av Kolos”, contains spoilers. You can check out our thoughts on the previous episode by clicking these words.

Tzim-Sha (Tim Shaw), our disgusting tooth-faced assassin from the first episode, is back, terrorizing Paltraki’s (Mark Addy, who played Robert Baratheon on Game of Thrones) crew on the planet Ranskoor Av Kolos. Tzim-Sha is looking for something, holding Paltraki’s crew hostage. The longer he goes without it, the more people he’ll kill. Team TARDIS does discover what he’s looking for, but don’t know what it is, other than it’s a strange mineral. So they decide to confront the Stenza assassin. We find out that he’s been able to trick the Ux (a race native to that planet which has serious telekinetic abilities—“they can affect the shape of the Universe by thought”) into making Tzim-Sha a god. With their combined powers, he’s miniaturizing whole planets, and now he’ll get revenge on Earth. Phyllis Logan guest stars, adding some great pathos to a character who would otherwise fade into the background (another Downton Abbey alum, following Siobhan Finneran from “The Witchfinders” a few weeks ago).

Graham is determined to kill Tzim-Sha as revenge for the death of his wife Grace, Ryan’s grandmother (this wound was reopened last week). This creates a rift between the Doctor and Graham—she won’t allow him to travel with her if he goes through with murder. Even Ryan determines to dissuade Graham from his course of action. Even though the writers have really let Yaz’s character down over this season (which I predicted early on, because Doctor Who has rarely had a successful ensemble Companion crew), I’m happy to see the burgeoning relationship between Graham (Bradley Walsh) and Ryan (Tamsin Cole). They’ve grown throughout the season from the reluctant pairing to a believable grandfather and grandson. Now, if only they could sort out how to use Yaz…

Now to my problems with this episode, and really with the whole season. Tzim-Sha isn’t really even a worthy foe. He’s no Dalek, no Cyberman, no Master—he doesn’t boast a worldview against which the Doctor must reason. He’s just a thug. The worst she can really say about him is that, “he’s one of those people who really irritates me.” And thus, the fundamental problem I have with this episode, and really this season. This is a fine mid-season episode: oh no! The return of a bad guy! But this isn’t a finale, there’s nothing of the stuff we’ve seen thus far, nothing toward which the season has been building. Because it hasn’t been building. 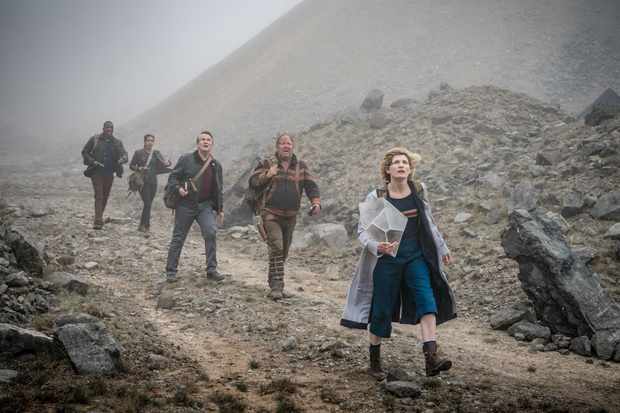 The Sniper Bots are back, which even faked me out. I thought we were going to get some big reveal that everything from the season had actually been pointing toward, a Bad Wolf-like motif. Nope. And this exemplifies my issues with Series 11.

Showrunner Chris Chibnall has given us a thematic season rather than a plotted season. This is both good and bad. I’m really surprised that this season lacked the ensemble-based intricate plotting for which everyone lauded Broadchurch. It’s as though Chibnall went back to his Torchwood days, going nearly stand-alone with his episodes. That’s not all bad, because he brought in some excellent thematic material to bind the season together—racism and gender issues and problems of loss and grief. However, a balance of the two, theme and narrative, would really have elevated this first season of the Thirteenth Doctor. It doesn’t need to be one or the other, themes or narrative. It felt, more often than not, that we were drifting along, rather than being guided or driven by a new showrunner with a vision.

We had stellar individual episodes that made bold statements, while other episodes just happened. This isn’t unusual for early Davies-era Who; but even series 1 would have felt aimless but for the Bad Wolf motif that drove us toward the end. We just needed some thread to bind everything together, or even some milestone episodes. Don’t get me wrong, we got some great, meaningful messages. But we needed a “Dalek,” a “Girl in the Fireplace” or something monumental and essential. We got some amazing episodes, true enough, but not enough to blow the doors off the place or to shift the direction of everything. Honestly, the most powerful things that this season gave us were “Rosa” and “Demons in the Punjab,” saying profound things about race, religion, and gender. But most of all, and this can’t be overstated, we got a great new Doctor.

I’m looking forward to the New Year’s Special (though I’m unsure as to why it’s not a traditional Christmas special…), because a new episode of Doctor Who is better than no episode at all. And it’s all we’ll get for over a year!