Yorgos Lanthimos has brought to life another devilishly idiosyncratic story, this time tackling the audacious power plays of 18th-century royalty. Between the talent behind the camera and the award-worthy turns from the trio of actresses at the center, The Favourite is a wickedly original dark comedy and one of the best films of the year.

Yorgos Lanthimos has brought to life another devilishly idiosyncratic story, this time tackling the audacious power plays of 18th-century royalty. Between the talent behind the camera and the award-worthy turns from the trio of actresses at the center, The Favourite is a wickedly original dark comedy and one of the best films of the year.

Around this timeframe each year, moviegoers are inundated with an endless barrage of films seemingly created with the sole intention of garnering awards and thereby bolstering the prestige of respective movie studios. For all their acclaim, these types of movies, coined as “Oscar bait,” often follow by-the-numbers stories that don’t dare to be original and are often still rewarded for their existence regardless. On the surface, a film such as The Favourite appears to be in this same vein, with it being a historical period drama with the usual furnishing such as top-notch cinematography, a memorable soundtrack, as well as impeccable costume and production design. However, it is clear from the moment the characters begin to speak that this diabolically demented historical dramedy is anything but the usual fare up for awards consideration.

We are immediately transported into the royal monarchy of early 18th century Great Britain with Queen Anne (Olivia Colman) occupying the royal throne while the country is in the midst of a war with France. It is quickly understood that Anne is unfit to rule as in her ailing health she is more interested in trivial activities such as racing lobsters and bunnies and would rather leave most of the ruling to her dear confidante Lady Sarah (Rachel Weisz). Surrounded by toadies who will say anything to win her favor, Anne values Sarah above all others as only she is so bold as to be bluntly honest with the queen about all matters, down to the Queen’s at times garish appearance.

This arrangement is disrupted one day with the arrival of Sarah’s younger cousin, Abigail (Emma Stone), a former lady who after a string of misfortune is now impoverished and in need of employment. After securing a position as a lowly maid, it is gradually revealed that Abigail is not the innocent, defenseless waif she pretends to be. She is in actuality eager to reclaim her social status and hatches a scheme to ingratiate herself into the Queen’s life and thereby climb the royal hierarchy. The ever-shrewd Sarah quickly becomes privy to Abigail’s intentions and what follows is a wild game of power plays and deception as the two cousins are eager to claim the title of the Queen’s favorite subject.

It’s worth noting that unlike his last two projects, Yorgos Lanthimos did not have a hand in writing the screenplay this time around. While this means the inhumanly comical alien dialogue from his last two films is absent, The Favourite still manages to capture the same idiosyncratic spirit of The Lobster and The Killing of a Sacred Deer. Writer Deborah Davis has brought forth a dramatic tale of sycophants and betrayals that is ingeniously rooted in true historical events and relationships. It is a warped world, however, where despite the stuffy pretentious façade, juvenile off-color quips are the norm. Between royal characters impetuously shoving those of lower social standing into ditches or calmly making threats of kicking another repeatedly until they leave, you are consistently left hilariously stupefied at what is playing out on screen.

Despite being a historical piece, the film feels timely as the trio of women at the heart of the story is each remarkably well-rounded, with the power plays being distinctly feminine. Queen Anne could have been nothing more than a cruel, petulant monarch ala Joffrey from Game of Thrones, but is instead carefully layered with tinges of melancholy and loneliness throughout. The film dares to explore the complexities of this tragic woman who despite seemingly having the world at her fingertips constantly laments the loss of her 17 children and feels completely alone. This depth is no doubt largely thanks to the fantastic performance from Olivia Colman, who is more than deserving of praise come awards season. 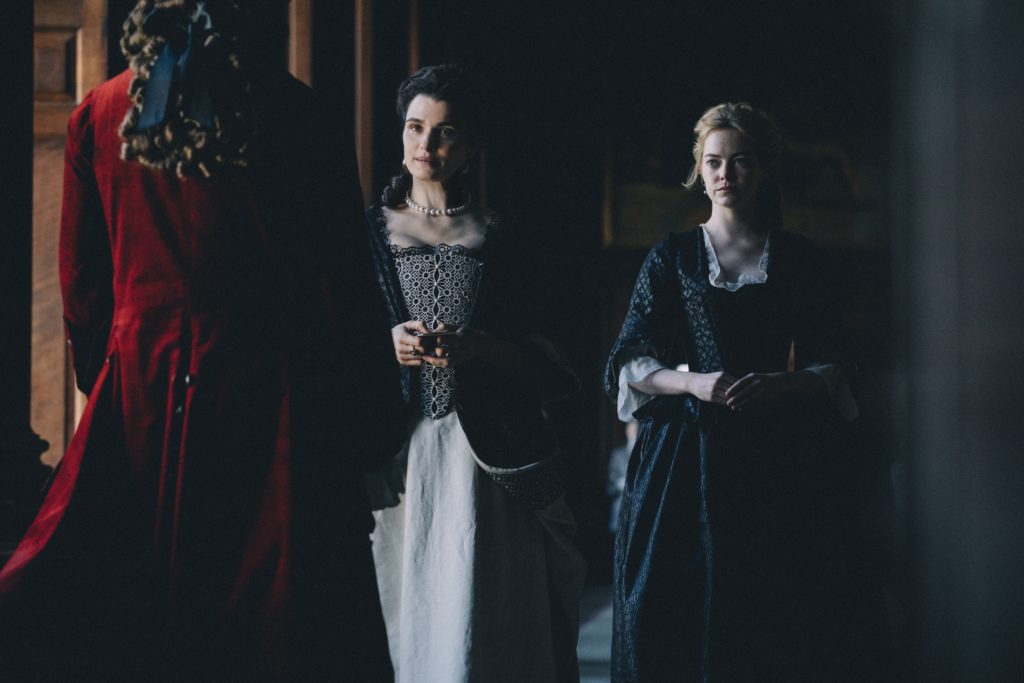 Rival cousins Sarah and Abigail are no less fascinating as well. Their deliciously wicked games of passive aggression are enthralling as our perceptions of each character gradually shifts. Weisz is phenomenal in presenting a woman that initially appears as the shrewd mastermind pulling the strings, but gradually thaws and is shown to be far more emotionally invested in her role as the queen’s advisor than was initially believed. Likewise, Stone adeptly tackles being a wolf in sheep’s clothing, as she expertly unveils more and more of Abigail’s darker traits until eventually revealing that the character was not at all what we initially believed.

Even with all of the hilarity that ensues earlier, The Favourite manages to include one of the more fascinating final shots of recent memory. Unlike so many others, it is not of an ambiguous nature as with a little reflection the overarching message of the film becomes clear, however, it will linger with you long after the story concludes and make you reconsider everything that previously transpired.

The Favourite is a one of a kind film that is wickedly funny and also has some profound themes regarding how true love can be a lot more acerbic than is typically believed. It is also one of the best films of the year and its daring originality deserves numerous accolades this awards season.