Brimming with heart, humour and character, Bumblebee is – somewhat improbably – one of the best blockbusters of the year.

Brimming with heart, humour and character, Bumblebee is – somewhat improbably – one of the best blockbusters of the year.

If you’d have told me just a few months ago that the latest Transformers movie would be one of the finest, purest, and most enjoyable blockbuster franchise films of the year, I’d have said you were being ridiculous. And yet here we are. Bumblebee isn’t just good – as insane as it feels to be typing these words, it’s great.

I’m as surprised as you are. Even though I’m not one of these heathens who treat Michael Bay’s leering robot orgy as though it’s the death of cinema or some such melodramatic nonsense, I still insist they’re not very good. (Although, admittedly, I thought the latest one was alright – sue me.) But they’re not very good in dull, corporate, self-indulgent ways; that typical style of bloated, chest-puffing machismo that has been not-so-affectionately nicknamed “Bayhem”. They’re not interesting to watch and they’re even less interesting to write about because they just are – they remain resolutely immune to critical opinion and unconcerned with the idea of changing or developing because of that. Which makes it all the weirder that Bumblebee is nothing like any of them.

Well, okay, it’s a bit like them. Technically it’s set in the same universe, a twenty-years-earlier prequel to the first Transformers film, in which Stanley Yelnats inexplicably got off with Megan Fox. Bumblebee (voiced by Dylan O’Brien) crash-lands in 1987 San Francisco after a slick action-heavy opening on Cybertron that features all the usual series stalwarts who look refreshingly like their 80s cartoon counterparts now. After falling foul of John Cena’s comically macho Agent Burns and a couple of Decepticon hunters played by Justin Theroux and Angela Bassett, Bumblebee quickly befriends teenager Charlie (Hailee Steinfeld), another suspiciously competent mechanic who is still reeling from the untimely death of her father. 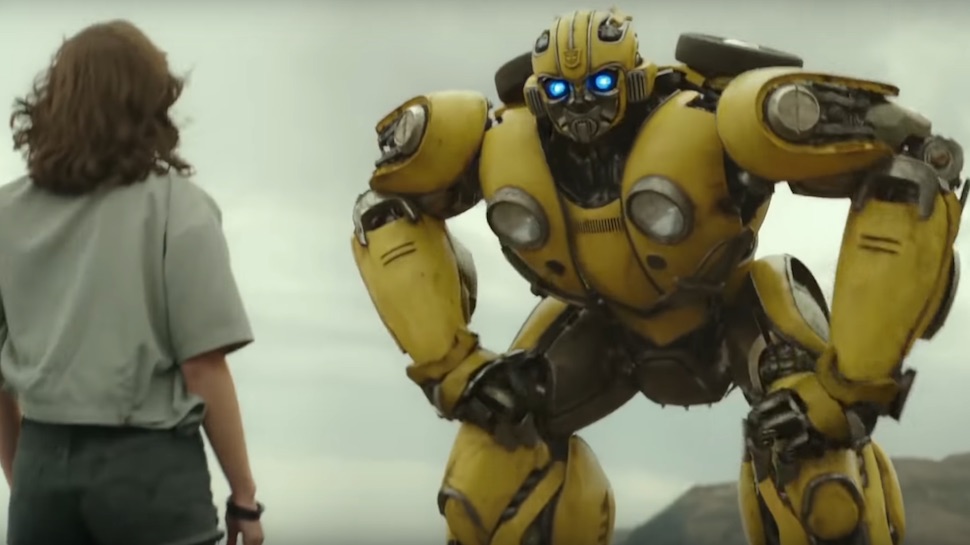 As a premise, this feels very reminiscent of the previous films, and there’s still a lingering conflict between the rebellious Autobots and the warmongering Decepticons that looms over the Earth-based proceedings in a way that feels totally unnecessary beyond fulfilling obligations to the broader franchise. But without Michael Bay in the director’s chair, Laika’s Travis Knight is free to do with the franchise what should have been done from the very beginning – bring the toys to life.

Christina Hodson’s screenplay is playful and full of knowing gags, both related to the time period and the series as a whole, but it’s Knight’s facility for characterizing non-humans that really elevates Bumblebee as a blockbuster. The titular robot has the wide-eyed enthusiasm and naiveté of a child or at least the puppy-dog that Charlie sees him as, and his attempts to blend in on 80s Earth provide some of the film’s best sequences. And he pairs well with Charlie herself. The consistently excellent Steinfeld captures a raw rebelliousness in a character who feels constrained by her small-town upbringing and aimless following the loss of a loved one.

In this way Bumblebee walks a fine line between saccharine and sweet; a divide best tip-toed along by Steven Spielberg, to whose work – particularly E.T. the Extra-Terrestrial – this film quite clearly owes a debt. If it weren’t so modern-looking you’d be forgiven for thinking that Bumblebee had been transplanted straight from Amblin’s 80s catalog, although it admittedly cribs from other period genre films, such as with Cena’s tough-talking chest-beating All-American Patriot pastiche, who is predictably an absolute delight.

But it’s humor and heart that Bumblebee burns for fuel, and even when it veers into slightly darker territory – robots are tortured and sliced in half, and the villains cheerily eradicate humans without much fuss – it never feels as though it’s trying to be edgy or mean-spirited. The film’s sensibilities remain rooted in the era in which Bumblebee finds himself; his solo outing is warm, funny, nostalgic and affectionate, and for the first time, the Transformers franchise continuing seems less like a threat and more like a welcome promise.