Openly, I’ll admit I’m not that familiar with the lore of Transformers as toys, 1980’s TV shows, or the recent run of Shia LeBeouf and Mark Wahlberg-led movies. I saw the 2007 movie and didn’t think much of it, I’ve seen snippets of the others, and ever since then, I’ve done my best to avoid the brash directing of Michael Bay’s next four in the series. Bay is a producer on this feature but he’s no longer in the director’s chair, and is that the sigh of relief we and the franchise needed?

Bumblebee opens on Cybertron with the Autobots warring against the nefarious Decepticons. As they look likely to lose Optimus Prime (Peter Cullen) sends Bumblebee (Dylan O’Brien) off to Earth to set up a base and keep that planet safe so they can all reform later. B-127 hides out as a rusted yellow VW Beetle and is found by misfit and car savvy Charlie (Hailee Steinfeld) who befriends the robot and together they try to stop two Decepticons who have landed on Earth.

Delightful and sweet are two words I never thought I’d use to describe a Transformers movie but here we are because this is a heartwarming black and yellow spin. It’s a charming little film. There are of course some smashy-bashy set pieces but little is the operative word because unlike Michael Bay’s take on the sentient bots, this release feels cleverly reined in and neatly focuses on emotion and a great coming-of-age narrative.

Travis Knight and his days for the magical Laika Studios have set him up brilliantly to direct his first live-action flick. From animating Coraline to filling this latest outing with heart, Knight has a clear understanding of family friendliness and a warming positivity. Let’s just hope that Bay stays well away because this is a refreshing take on a series that I really thought should be dead and buried. 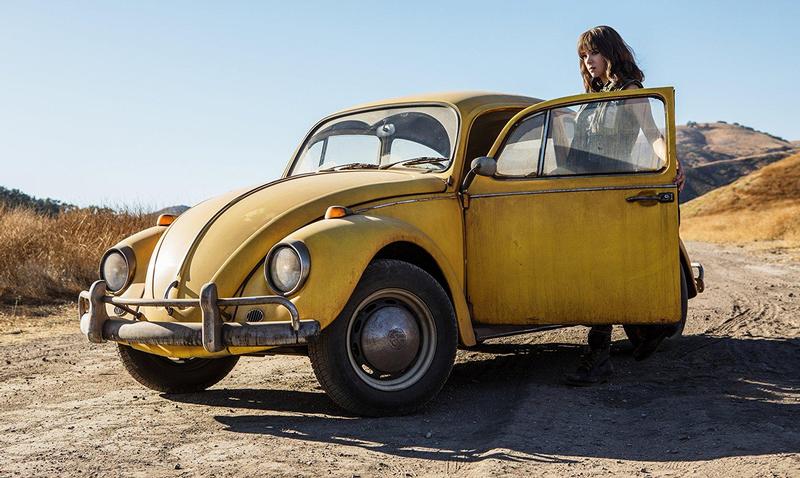 Each part and piece of this film melds together wonderfully to create an electric spark. A healthy percentage of this is thanks to screenwriter Christina Hodson who weaves nostalgia, emotive responses, and summery-set teenage drama into a humorous film for the family to enjoy. The comedy isn’t ever loud and in your face, it has this big yet understated quality as Bumblebee becomes a ginormous figure of mishap and amusement in the same vein as one Paddington bear.

There really aren’t that many low-lights to speak of for this film. Sure the opening which introduces the audience to how and why B-127 is sent to our planet isn’t the most hopeful start and feels strangely hollow considering all the whizz-bang-fizz of the visuals, but aside from that and some later battle bot clashes which are messy and smash like a faint headache, this is a huge deal better than the Bayhem which came before, there’s no unnecessary slow-motion and the explosions are culled to a satisfactory level.

Another one of the strongest qualities going for the film lays at the feet of its lead actor. Hailee Steinfeld is a true winner as mechanic maestro Charlie. She’s a dream as this teenager struggling to be who she once was and her many interactions with the shape-shifting Beetle and her infatuated neighbor Memo are glorious.