Brian Azzarello and Lee Bermejo’s treatment of the Dark Knight continues to impress and confuse in Batman Damned #2.

Brian Azzarello and Lee Bermejo’s treatment of the Dark Knight continues to impress and confuse in Batman Damned #2.

Well, the dust clouds may have settled over the first issue of Batman Damned, but the second in the series brings us more of the same. Thankfully there’s no Bat-nudity on show, but the story and art continue to both impress and confuse readers such as me.

(Editor’s Note: For more weird Batman stuff, check out our review of The Batman Who Laughs.)

First of all, though, it’s impossible to say anything but great things about the art from Lee Bermejo.

From his sweeping two-page spread of Gotham to the claustrophobic depths of The Cavern, the art is simply astonishing, and I would go so far as to say it may be some of the best art to grace a Batman series in decades.

Bermejo brings clarity, despite the complex nature of every panel, and his Constantine and Enchantress are just perfect. Batman looks imposing and practical, his boots and belt look like something you would buy in a super hero hardware store, and despite the universal silliness of super hero costumes, Bermejo throws everything at the page to make him feel real.

Now the writing is where things get a little more complicated with Batman Damned #2.

Brian Azzarello fills panels with pseudo poetry that will probably pay off eventually when the third act is complete, but in the interim, it seems to be off kilter a lot of the time and becomes a distraction more than anything else.

So engaged are we with the art that the floating dialogue seems to be an attempt to add depth, and that is something that the book doesn’t really require. 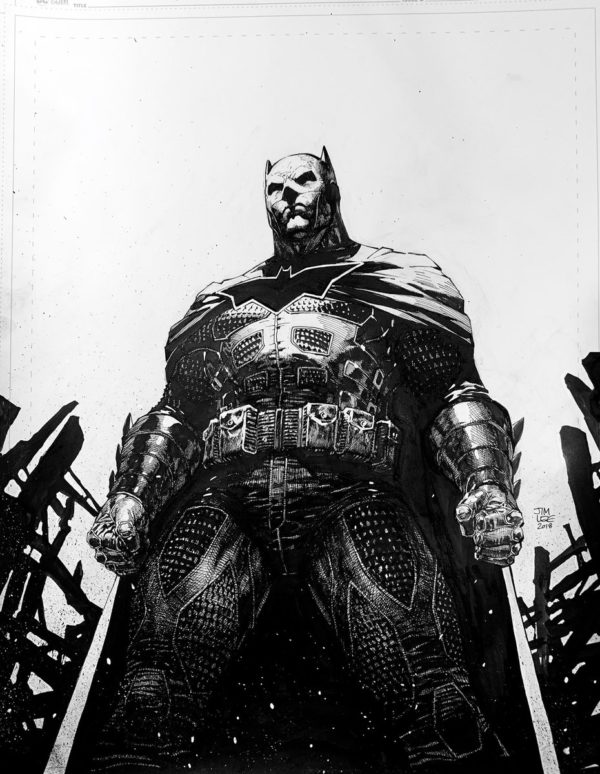 The dialogue between Bats and ‘Ol Hellblazer himself is also quite obtuse, and there’s a scene with John finishing Bruce’s sentences that seems a little smug.

Of course, we are presented with some more appearances from other occult DC properties such as Deadman and The Demon, the latter of which takes Kirby’s rhyming gimmick kicking and screaming into the 21st century.

There’s a reveal at the end that I won’t spoil, but I can’t help but direct you to the second-to-last page of this issue, and what appears to be a homage to Moore and Bolland’s Killing Joke.

I may be wrong, but I hope I’m not, and it would be nice if you agree with me enough to let me know so I know I’m not just seeing patterns in things that aren’t really there.

Batman Damned #2 also includes some flashback stuff to young Master Bruce, and some weird scenes with poor Martha, who seems to be in the middle of a breakdown as the Wayne marriage starts to collapse. This aspect of the story is the least compelling, and I hate when writers try and add new relevance to old characters; it’s Sins Past all over again.

Plot wise, there’s not too much to say here, and I wonder how they will tie this up in Issue #3 in a satisfactory way. Regardless, I will be throwing my $6.99 at the LCS, as the art alone is worth the price of admission, and I applaud DC for keeping the price low, as I would honestly have payed double just to see Bermejo’s Bat art.

Roll on the finale in February, all being well.