Howard Chaykin brings his unique facility for dialogue to Hey Kids! Comics! #5, as the master of the medium continues to chronicle its history.

Howard Chaykin brings his unique facility for dialogue to Hey Kids! Comics! #5, as the master of the medium continues to chronicle its history.

So Howard Chaykin gives us Issue #5 of Hey Kids! Comics! and it pretty much continues the style, pacing, and awkwardness of the previous four. (You can read our review of the first issue by clicking these words.)

I love Chaykin, and I think if there was no dialogue in this comic, I would still have enjoyed looking at the ultra-style that Chaykin has when drawing people in the real world, especially when they operate in the ’30s and ’40s. Unlike some other artists that have worked through the decades, Chaykin has maintained the style he always had, from early issues of American Flagg.

His sense of pacing, dialogue, and style are always prevalent, and although some of the finer details may have softened over the years, what you see is a true master of the medium really enjoying himself.

Chaykin is the Aaron Sorkin of the comics world. Nobody does dialogue like him. Sharp, poisonous, biting and hard-hitting, his characters spit bile at each other, and there’s no shortage of curse words here, but unlike other so-called edgy books, when Chaykin’s creations swear, it just seems real.

However, after the passing of Stan Lee, I almost felt a little guilty reading the final issue of this series.

Chaykin knows what he’s talking about here, and the problem is, so do we. 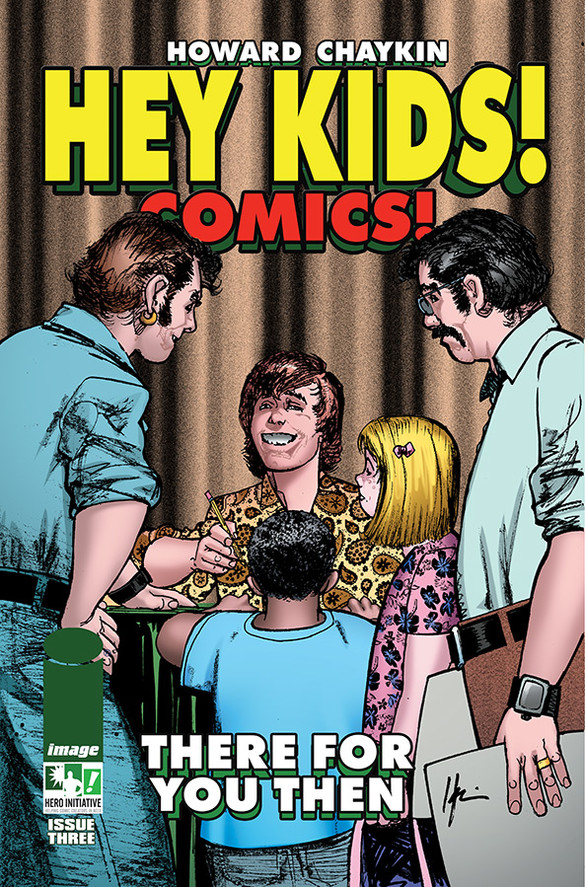 His sardonic, often cruel depictions of huge creators from the golden and Silver age of comics seems bitter, and as a reader, I was left wondering just how much is accurate and how much is made up.

There’s are beats in the story that line up with what we know about the working conditions of certain creators, and there are other subplots that we know less about, but in context seem easy to believe.

In Hey Kids! Comics! #5 we start in 1945 with artists reduced to drawing Tijuana Bibles then later, in the aftermath of Dr. Wertham’s damning tome Seduction of the Innocent, we see how the book brought comic companies to their knees. Then we jump to 1965 with Editor-in-Chief of Verve Comics Bob Rose pondering the success of his company and finish up in 2015 at the judicial copyright hearing over the ownership of characters before we see the extent of the popularity of said characters in merchandising, comic-cons and media.

The final four pages back in 1938 are poignant and heartbreaking, almost making me rethink my love of the genre altogether.

Anyway, the visuals make Hey Kids! Comics #5 for me, and the callbacks to various styles of comic books are genius.

I could look at Chaykin swiping styles all day and as usual with Chaykin, the devil is in the detail.

The last page hints that there may be more to come from this series, and I for one will masochistically be along for the ride.