A compelling lead and some moral ambiguity help to keep Halo: Lone Wolf #1 interesting, despite a merely serviceable tie-in story.

A compelling lead and some moral ambiguity help to keep Halo: Lone Wolf #1 interesting, despite a merely serviceable tie-in story.

Halo as a franchise has long been dominated by the faceless green machine-man Master Chief, and if Halo: Lone Wolf #1, the new tie-in miniseries from Dark Horse by Anne Toole and Kieran McKeown, has an advantage right out of the gate it’s the freshness of its protagonist. The titular lone wolf is Linda-058, a Spartan sniper with an evidently more flexible moral compass than the series’ longstanding hero.

Thanks to her specialist skills and a strongly implied mission-first outlook, Linda (a comically nondescript name for a Spartan, which I suppose is the point) is despatched by her superiors sans team to a remote planet where a human traitor is hiding out with other survivors. This is set in the aftermath of the Human-Covenant War and frequently references the Fall of Reach, so long-time fans of the Halo expanded universe will feel right at home here.

Linda’s mission is to execute the traitor first and rescue any survivors second, which we see as she tracks two humans back to their hideout while bickering with her AI companion, Athos, who is presumably used to more heroic partners. Linda doesn’t do anything outright evil, but her at-all-costs approach to the mission is intriguing, and I hope Toole goes further with it in subsequent issues. 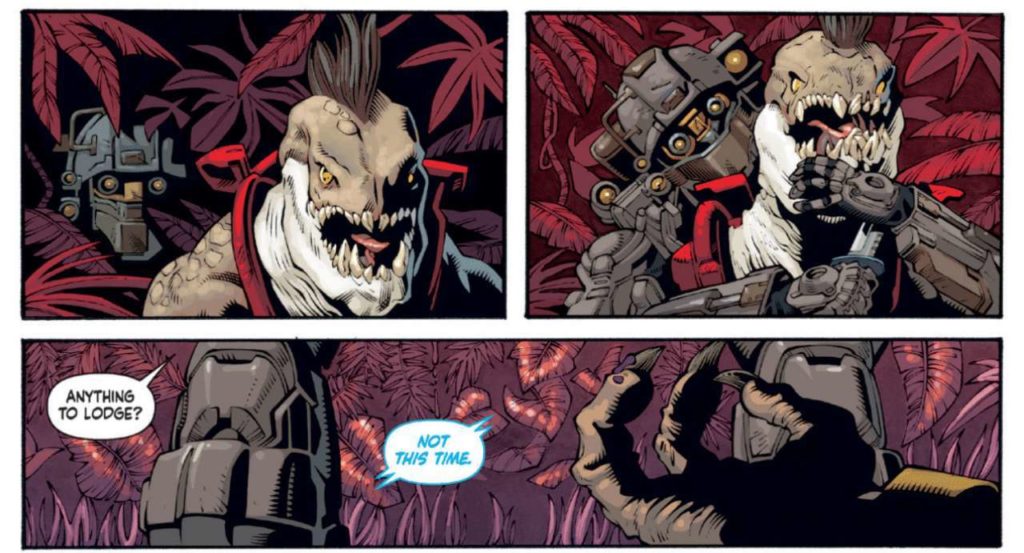 On the art front, McKeown does a more than decent job, but it’s the colourist, Dan Jackson, whose work stands out the most. Halo has always been a colourful series – which is rare for a property that began life as a mainstream first-person shooter – and Halo: Lone Wolf #1 has a lot of pop to it. Some great panels of Linda sneaking around and offing Covenant forces help to reinforce the idea that she’s a stoic and detached operator on a stealth mission, which is always a plus. (Remember when Mace Windu went on a similar mission and sprinted from the bushes with his lightsaber drawn? This is the way to do it properly.)

It’ll be interesting to see where this series goes next. Halo: Lone Wolf #1 is a workmanlike opening that introduces a compelling protagonist and a promising moral ambiguity, but whether it makes the most of those things remains to be seen.