American Hangman boasts a chin-scratching ethical hook and a solid lead performance, but a wavering focus lets it down.

American Hangman boasts a chin-scratching ethical hook and a solid lead performance, but a wavering focus lets it down.

Wilson Coneybeare’s American Hangman is about, among other things, the general incompetence of the American justice system and the pitfalls of capital punishment. It’s also about reality television and the internet and how online anonymity tends to divorce us from our empathy and morality. But it’s mostly about Donald Sutherland. Here he plays Judge Oliver Straight, an aging magistrate who allegedly passed down the death penalty to an innocent man. The setup of this low-budget B-picture allows Sutherland plenty of time to regally monologue about the law in a makeshift basement courtroom where millions on the internet get to decide his guilt or innocence.

Anyone who has seen Saw (which evidently includes the filmmakers, as Leigh Whannell and James Wan’s cult classic is cheekily referenced more than once) will feel right at home here. Initially Sutherland is kidnapped alongside an average Joe played by Paul Braunstein, who is summarily offed by their demented captor (Vincent Kartheiser). You you can tell he’s mental because his greasy hair is combed down over his eyes. The dank hideout is being live-streamed to an online audience, and much of the film sees these two engage in lofty philosophical debates about crime and punishment in America.

One must concede that the debate isn’t exactly complex or nuanced – it’s a bit like both characters have only just learned that the death penalty exists and are discussing the most obvious merits and drawbacks that spring to mind. But Sutherland’s haughty delivery livens it up, and there’s fun to be had in how capably he befuddles his know-it-all interlocutor. Of course there are more timely angles from which to approach the on-going debate surrounding the failings of law and order, but in another film, perhaps. 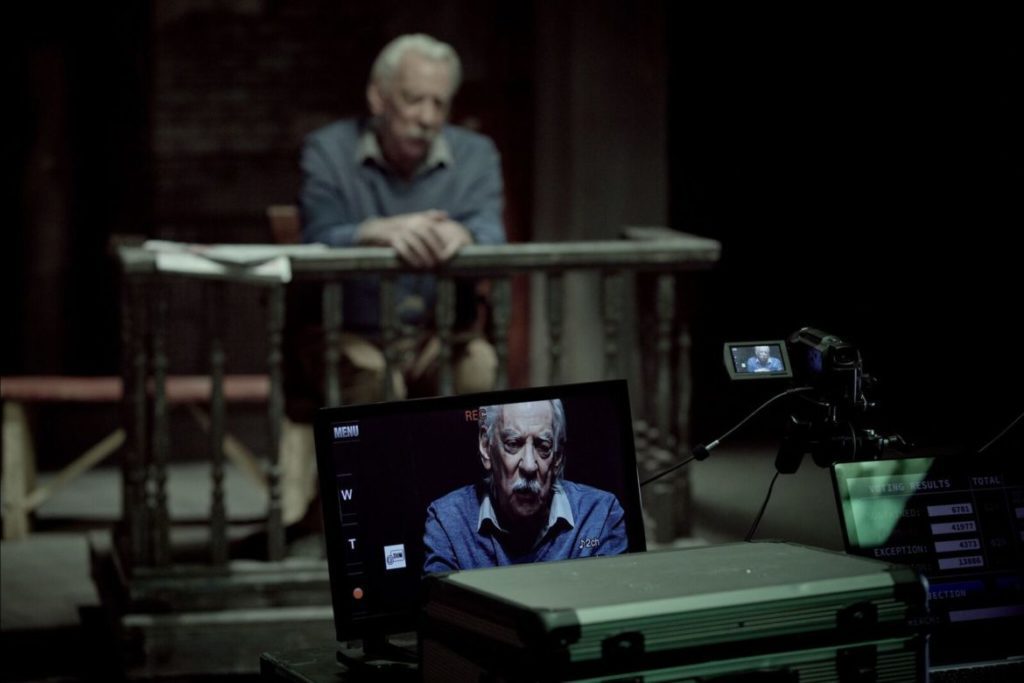 This stuff is nonetheless engaging and significantly more thoughtful than most low-budget genre films, and Kartheiser proves a capable sparring partner for the veteran actor. It’s when Coneybeare strays outside the basement that American Hangman begins to unravel. Onlookers include a useless police department, some kind of do-gooding hacker, the clientele of a diner that include a practising criminal attorney who gets absolutely nothing of worth to do, and a go-getter newscaster trying to make the tragedy all about her and her network. These miniscule roles are all populated by much lesser actors and ill-served by Coneybeare’s screenplay, which has little to say about anything beyond its obvious focal debate.

Still, I’d be lying if I said I didn’t enjoy American Hangman, and those not expecting too much from it will almost certainly enjoy it too. Watching Sutherland work is (almost) always a pleasure, and while he is clearly beyond the material, he treats it with respect and seriousness. I’ll pass a verdict of cautiously recommended. And your objection will be overruled.