As grim and humourless as ever, but now a little silly and on the nose, Silent Witness 2019 is routine TV.

As grim and humourless as ever, but now a little silly and on the nose, Silent Witness 2019 is routine TV.

A show doesn’t run for twenty-two seasons without developing an identity, and the identity of Silent Witness 2019 is dour, serious and occasionally inhuman. Watching Dr Nikki Alexander (Emilia Fox), Jack Hodgson (David Caves), Clarissa Mullery (Liz Carr) and Dr Thomas Chamberlain (Richard Lintern) puzzle their way through forensic mysteries is sometimes like watching a morgue full of slot machines trying to ring cherries, and in “Two Spirits, Part One”, the first half of a two-episode season opener, the show is also dealing (rather inadequately) with timely social commentary.

As such, there’s a killer on the loose who appears to be targeting transgender people, or at least people associated with a charity that helps them, and there’s a good chance that the actual perpetrator is a member of that community, too. Cue a good bit of extraordinarily on-the-nose debating about pronouns and public toilets, almost none of which feels naturalistic in context. A suspect inquires about which pronouns will be used in the police report; there’s an explicit argument about whether being transgender should be considered a mental illness; and so on, and so forth. 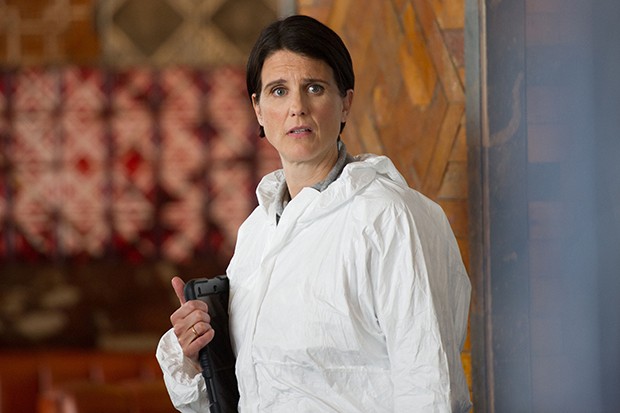 None of this is to say that these conversations shouldn’t be had, but perhaps they should be had with a bit more nuance, and not glossed over as the catalyst for a splattery murder investigation in which a serial killer spikes their victims with a date-rape drug and then slashes their throats with a serrated blade in public toilets. I suppose once you’re bleeding to death on the floor, whether or not you were in the “right” toilet is sort of beside the point.

It just feels a bit silly, really. “Two Spirits, Part One” isn’t offensive, of course, but it hardly feels probative or insightful, either. It attaches topical commentary to a not particularly well thought-out crime spree without ever really finding a way for one to inform the other. The conversations on trans rights seem detached from the main plot, and while those issues clearly link to the killer’s motive and unsanitary MO, there’s a tokenism in the presentation that undermines Silent Witness 2019 both as a crime show and a drama with a compelling point.

Maybe the second part, which airs tonight, will help things cohere a bit better. But “Two Spirits, Part One” was an exercise in trying to do two things at once and ending up doing neither particularly well.