The funniest show on television returns for a honeymoon on a new network, but relax: it’s the same Brooklyn Nine-Nine you love.

The funniest show on television returns for a honeymoon on a new network, but relax: it’s the same Brooklyn Nine-Nine you love.


This recap of Brooklyn Nine-Nine Season 6, Episode 1, “Honeymoon”, contains spoilers. You can keep up-to-date on our full series coverage by clicking these words.

“Honeymoon”, the sixth season premiere of Brooklyn Nine-Nine, has a tough mandate. First and foremost it has to carry on like nothing happened in the intervening period; like there weren’t any cancellations or fan outcry or last-minute minute saves by new networks. But it also has to appeal to viewers of that new network; charm another audience without abandoning what made the show so funny and resonant in the first place. It shouldn’t come as much of a surprise, but Brooklyn Nine-Nine’s sixth season debut manages to accomplish all that and then some, reminding everyone that it just might be the most effortlessly funny and endlessly likable show on television.

“Honeymoon” begins with an answer to a question that many fans thought might never be answered: Did Captain Holt (Andre Braughter) get the commissioner job? Yes! Well… no, actually, but his speed-reading of the email makes for an enjoyable and classically awkward cold open. So, Holt didn’t get the job, which would have shaken up the show’s status-quo, but there’s no time for sulking. Jake (Andy Samberg) and Amy (Melissa Fumero) are going on their honeymoon, thanks to some deft reading of their wedding insurance fine-print. Plus Gina (Chelsea Peretti) had a promo code.

The tiny Mexican resort where they end up is a paradise; they’re drinking from coconuts and lackeys run to fetch them grapes on request. But their idyllic getaway is interrupted by a despondent Holt, who is lounging around in novelty shirts and refusing to return to work. Pay attention to those shirts – they provide a consistently hysterical running gag to “Honeymoon” that reoccurs in almost every major scene, including one in which Holt announces that he’s quitting the force, partly inspired by Jake and Amy trying to cheer him up. 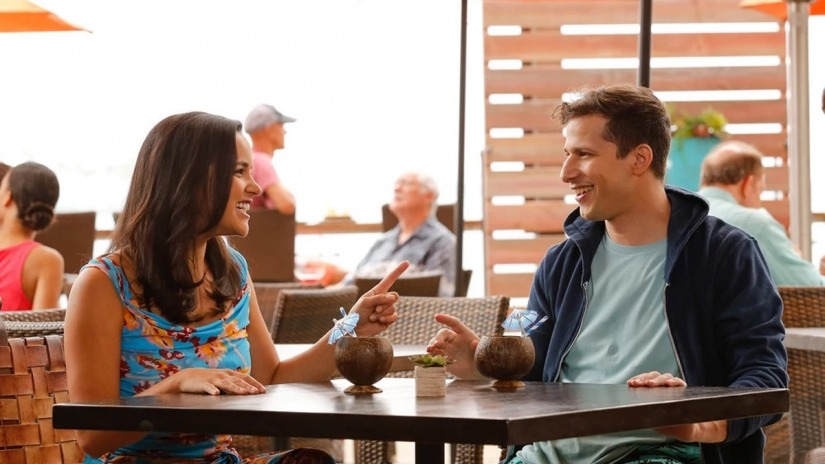 This is funny for obvious reasons, but it’s also important because it shows how ably Brooklyn Nine-Nine can navigate tricky, downbeat territory without actually feeling downbeat at all. Holt’s justifications for quitting the force – which nobody for a moment thinks he will do – are great; he insists there’s no longer any crime in Brooklyn and that the general public love the police force, which are flagrantly ridiculous notions. But his anger and bitterness at being passed over for the commissioner job are real, and a reflection of a real, unfair working life – perhaps the kind of life that co-creator and showrunner Dan Goor might have lived in the fraught hours after his show was canceled by a major TV network.

It’s also an example of how well the show can handle different pairings of its main characters, and also how it can have them behave against type to both comic and dramatic effect. Holt is in no small part brought out of his funk by Amy tearing him a new one, with Jake playing a rare straight man to Holt’s perennial weirdness. The exact composition of Brooklyn Nine-Nine might be ever-changing, but it’s always working to the same ends: Laughter first, and team-building second. Because these characters love each other, we love them.

Thus, back at the office, temporarily in-charge Terry (Terry Crews) is frantically trying to access Holt’s computer, where he left instructions for his successor should he have received the commissioner job. With the help of Rosa (Stephanie Beatriz) Terry is able to crack the code, and for all his flustering he discovers that Holt’s instructions were just to trust Terry’s judgment.

That knowingness, warmth and supportive of these characters, and more importantly their perseverance, are what make Brooklyn Nine-Nine special. It’s a show about unfairness and injustice in which all of the silly made-up characters are united in their decidedly human resistance to unfairness and injustice. Holt’s presence on Jake and Amy’s honeymoon might have ruined their romantic trip – but did it really? Or did it remind them – and us – that not only does Holt need the Nine-Nine, but that we all do.