A bit more tolerable than last week, Silent Witness is still laying the moral messaging on thick with “Lift Up Your Hearts, Part One”.

A bit more tolerable than last week, Silent Witness is still laying the moral messaging on thick with “Lift Up Your Hearts, Part One”.

This recap of Silent Witness 2019 Episode 3, “Lift Up Your Hearts, Part One”, contains spoilers. You can check out our thoughts on the previous episode by clicking these words.

In another ripped-from-the-headlines two-parter, Silent Witness tonight took aim at drugs – particularly the all-the-rage synthetic “zombie drug” Spice – for a preachy hour. It must be said that “Lift Up Your Hearts, Part One” was a bit more affecting than last week’s transgender debacle, and managed to end on a powerful note, but the show’s persistent moral messaging, important though it may be, is still getting in the way of actual drama.

Sometimes the familiarity of Silent Witness works to its advantage. Clarissa (Liz Carr) explaining how cooking meth works was something of a pleasure, at least. But it’s just as often all-too-difficult to care about these characters because they’re so firmly embedded in a predictable routine. Even when potentially interesting developments crop up – in “Lift Up Your Hearts, Part One” it was the presence of Eastenders’ Samantha Womack – they’re generally swerved so as not to jeopardize the status quo. Of course Jack (David Caves) is holding out for Nikki (Emilia Fox). He might be holding out forever. 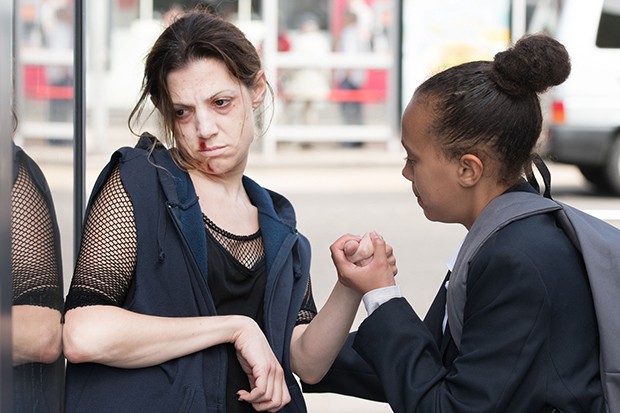 The drugs stuff, though, despite being a bit obnoxiously heavy-handed at times, at least had moments where it really worked. The decision to end on a local headmaster’s (Colin Salmon) daughter tragically dying was a clever one because it got at the mundane reality of how drugs can wreck a community and the lives of the people in it. The illusion that only long-time addicts overdose is one that needs to be dispelled, and “Lift Up Your Hearts, Part One” helped to do so; it only takes a couple of drags of a laced cigarette to end a life. Teenage precociousness is rarely worth the risk, and I say that as someone who acted out as a teenager more than most.

Ups and downs this week, then, but a slight (and welcome) improvement over the season opener. Silent Witness is still far from great television at this point, but at the very least its television that might be slightly useful to a young generation who are more at risk from the issues it concerns itself with than those of us judging at home.