It’s the CW through and through, but as heavy-handed as the socio-political subtext might be, Roswell, New Mexico at least has the decency to be about something.

It’s the CW through and through, but as heavy-handed as the socio-political subtext might be, Roswell, New Mexico at least has the decency to be about something.

The CW has a bad reputation, mostly for providing a home to terrible shows that wouldn’t be allowed to squat anywhere else. But the teen-friendly network deserves its share of credit for consistently courting a very particular audience who are receptive to a very particular type of show – a show quite like Roswell, New Mexico, the reboot of a much-loved show from the late-90s and early-00s, and one that embraces the CW’s favourite things so completely and enthusiastically that you almost don’t notice that it’s now an explicit commentary on bigotry, a fear of otherness, and the political administration that currently burns them for fuel.

It’s to be expected, I suppose. The CW is an openly progressive, liberal network, and the idea of literal aliens being a metaphor for undocumented immigrants must have been too good to pass up. And so here we are, back in the world of small-town drama and diners full of jukeboxes and passionate romance with extraterrestrials. The pilot is, as expected, messy and overstuffed, coasting by mostly on nostalgia and the timeless appeal of handsome people falling for one another. But at least it has a willingness to not just imply a point of view, but to say it out loud. Most shows don’t.

The premiere opens with Liz Ortecho (Jeanine Mason) being stopped at an ICE checkpoint – subtle! – after ten years away from Roswell, New Mexico, where her and her family are pariahs thanks to a DUI that took the lives of Liz’s sister, Rosa (Amber Midthunder), and two other townsfolk. Rosa was blamed because she was a junkie and also, presumably, because she was the daughter of undocumented immigrants, including a father, Arturo (Carlos Compean), who continues to be targeted for his status. But back to that checkpoint. In typical CW fashion, the cop who pulls Liz over is Max Evans (Nathan Parsons), her high-school sweetheart who has been nursing unresolved adoration for a decade. He’s also an alien. 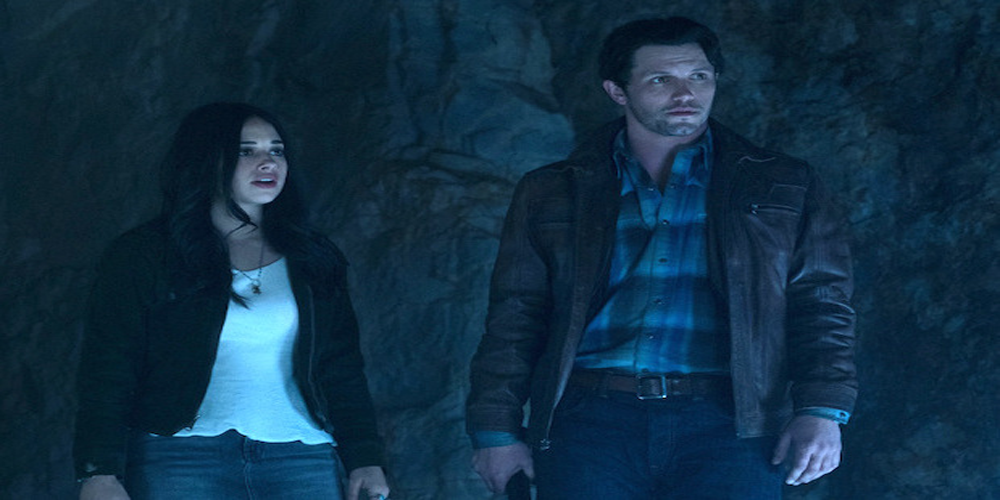 Nobody’s surprised by that – nobody watching, anyway. Roswell, New Mexico is so famous for such a specific thing that you could never set a show there and not include aliens. But Liz is pretty shocked, especially when, in the first ten minutes of the pilot, she’s shot in a drive-by, dies, and is then revived by grief-stricken Max’s alien healing powers and the remarkable bamboozling power of ketchup. All is well. Only it isn’t, since Liz distinctly remembers being shot. Worried that she’s losing her mind, she turns to her ex-boyfriend Kyle (Michael Trevino) – of course she does – for an “examination”. There’s no bullet, but there is a tell-tale handprint, so Kyle informs a local no-nonsense anti-alien type that shenanigans are afoot. Men!

Max, meanwhile, is knackered from his life-saving exertion, much to the chagrin of his sister, Isobel (Lily Cowles), and Michael (Michael Vlamis), both fellow aliens who have similarly disguised themselves as ordinary members of society. Isobel seems to be relishing it, but the genius bad boy tearaway Michael is building a spaceship in the desert. Different strokes, I guess. Either way, they’re justifiably annoyed that Max has risked their exposure for selfish and horny reasons, which I suppose is reasonable. Luckily Liz is reasonable too – perhaps the most reasonable person who ever lived, all things considered, because when Max takes her out to the desert and tells her he’s an alien, she just kind of brushes it off. Maybe it’s scientific curiosity – did I mention she’s a scientist? She’s a scientist – or maybe it’s just the romance of “temporary psychic bonding”, but whatever. She’s keen for a smooch.

A happy ending to the premiere, then? Not in Roswell, New Mexico, folks. There’s plenty to worry about. There’s a hilarious underground alien-defence facility, Michael is gay and has a particular fondness for his old buddy Alex (Tyler Blackburn), which won’t go down well with dad, there’s a crazy conspiracy theorist podcast propagandist who keeps popping up, and the episode ends with the revelation that the aliens had something to do with Rosa’s death. Blimey. I’m sure all that will go perfectly smoothly.