Netflix film Soni is a must-watch story, providing a social lesson and account of how women are faced with violence and unwarranted pressure on a daily basis.

Netflix film Soni is a must-watch story, providing a social lesson and account of how women are faced with violence and unwarranted pressure on a daily basis.

Netflix film Soni articulates at a microscopic level the frequent setbacks women have to face in various cultures throughout the world. I would be hesitant to state that Soni is not a story with an end objective, but more a series of case studies that the characters suffer with on a daily basis. The Hindi-language film is often bleak, with a scarce reality often hard-hitting to the viewer. I was undoubtedly educated, rather than immersed in a story.

In the opening scenes, a young policewoman named Soni (Geetika Vidya Ohlyan) in Delhi is riding her bike back home, with another man on a bicycle following her. At first, I presumed that they were friends and the man was merely joking with her. However, it becomes evident that this man is uncomfortably thirsty for female attention. He continues to shout at Soni until she eventually stops and asks him to leave him alone. Of course, he refuses, so she violently attacks him, and a group of other officers stop her from hurting him even more.

The scene I have described is a reoccurring theme in Soni, where the young policewoman is found to be disrespected by a man who feels he has a higher authority; the irony, of course, is that she is the police – that level of thinking should not apply. Each time an incident like this occurs, Soni is reprimanded, and transferred to an admin-type role, taking phone calls of citizens. 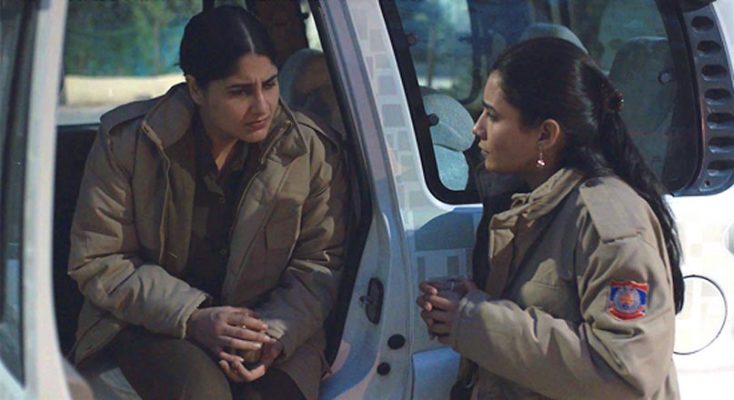 Soni represents how women are not listened to, and how men are so brainwashed by the ingrained ideology that they believe their actions and behaviors are apart of life. The tragic but beautiful thing about Soni is that she is sold as an anomaly in the culture she lives in. While the other women in the Netflix film accept their cultured ways, the policewoman always stands up for what is right, even if it means getting stared down by disapproving men.

The other character in the Netflix film is Kalpana (Saloni Batra). What’s strange about this person is that she is higher up the chain at the police force, seemingly romantic with the chief. Her character is mentally tangled by what is and isn’t wrong, and her principles are often tested whenever Soni is punished for being provoked by men. Kalpana is intriguing because she represents the woman who does not speak up, more so due to societal pressures. The performance is outstanding from both lead actors, as you can see the mental conflicts on their faces.

Soni often throws in a scenario where an acquaintance questions the women’s lifestyle; the young policewoman is adamant that she gets her gas cylinder for her house, but various people in her life keep on asking a man to help her get one quicker. She refuses to be supported by men, to trust them or even entertain the idea of giving them eye contact – this is telling of her character and what she represents. Meanwhile, Kalpana lives in a world of men and has to find ways to balance her approach and behaviors but equally be dismayed by their actions.

Soni is a well-crafted film with the right messages and one director Ivan Ayr should be proud of making,