Star Trek: Discovery Season 2 gets off to an energetic opening in “Brother”, as old faces return, new ones arrive, and a mystery emerges.

Star Trek: Discovery Season 2 gets off to an energetic opening in “Brother”, as old faces return, new ones arrive, and a mystery emerges.

This recap of Star Trek: Discovery Season 2, Episode 1, “Brother”, contains spoilers. You can check out our coverage of the previous season by clicking these words.

In a lot of ways Star Trek: Discovery seems designed to intentionally aggravate long-time fans of the franchise, and I think that’s partially what makes it so enjoyable for me. I take no great pleasure in seeing people miserable, obviously, but there’s something to respect about a show that has its characters drop lines quite clearly aimed at a fickle audience; this second season is, by the admission of Captain Pike (Anson Mount) in its premiere episode, “Brother”, going to “have a little fun” and “ruffle a few feathers”. And that’s fine by me.

Pike is aboard the USS Discovery because his own ship, the USS Enterprise, is out of commission. He brings with him two of his own crew and promptly takes charge of a new mission: To join some galactic dots that hold the mysteries of a “red angel” sighted by Michael Burnham’s (Sonequa Martin-Green) fan-favorite foster brother Spock when he was just a child. The opening hour of this season burns the anticipation of Spock’s arrival for fuel, but he never appears beyond flashbacks to his childhood and a last-minute recording of his voice. It’s another way in which Discovery teases – and perhaps tortures – the fans who are still unsure of how it fits it into the broader Star Trek canon; when Pike says that the best way to avoid disappointment is to lower your expectations, there’s no mystery who he’s talking to. 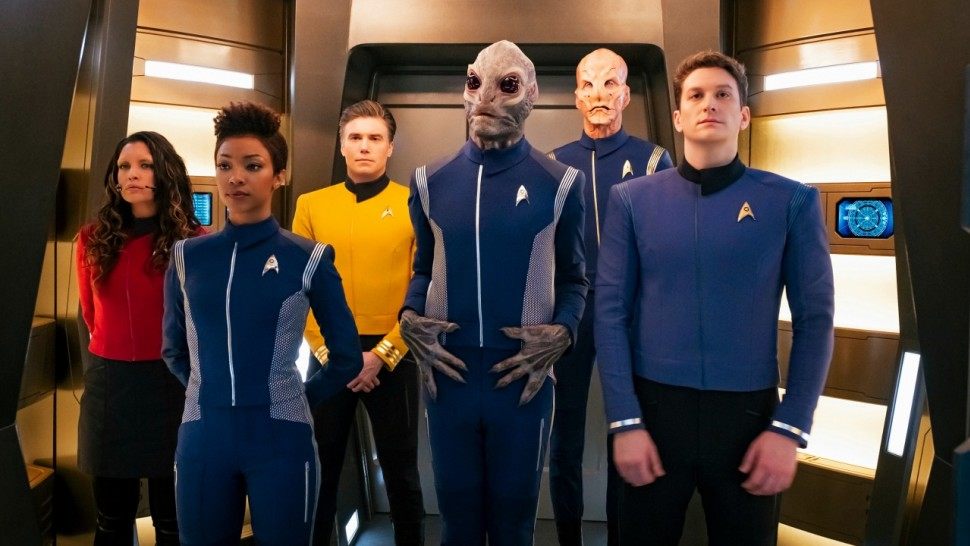 As someone who is the furthest thing from a Trekkie, I love Star Trek: Discovery for all the elements that it dials up in this second season premiere: I love the sense of camaraderie among the crew, which still includes the fastidious and gangly First Officer Saru (Doug Jones), the charmingly overeager Ensign Tilly (Mary Wiseman), and the consistently brilliant Stamets (Anthony Rapp, who shouldered most of the first season’s drama amid the fallout from widely-publicised allegations he made against Kevin Spacey); I love the lightness of tone and the jokes and the sense of venturing into the unknown; I love the visual effects and the show’s eye for compelling action sequences; and I love the galactic mushroom highways and other such nonsense. “Brother” has all of this in plentiful supply, and as a result immediately feels more self-assured.

I couldn’t care less that the show – intentionally or otherwise – displeases a vocal subset of hardcore fans by veering from the established tone and continuity, nor am I particularly bothered that this second season seems so distinct from the first that it might forget about the events therein altogether. Such things would usually bother me, but here they don’t at all; I think Star Trek: Discovery works either as a continuous story or an episodic adventure series with the vague promise of an overarching plot tying it all together.

It is, simply, exceedingly well-made, and buoyed by a tremendous ensemble cast. The new additions didn’t make much of impact in “Brother” – Pike is, compared to the rest of the crew, a relatively bland presence – but the familiar faces are more than welcome on the bridge; excited, enthusiastic, and quite clearly happy to be back. I know how they feel.