Reaching the halfway point in the season, “The Hour and the Day” continues to generate questions of reliability and perception, keeping pace with previous episodes.

Reaching the halfway point in the season, “The Hour and the Day” continues to generate questions of reliability and perception, keeping pace with previous episodes.


This recap of True Detective Season 3, Episode 4, “The Hour and the Day”, contains spoilers. You can check out our thoughts on the previous episode by clicking these words.

The title of this week’s episode, “The Hour and the Day”, alludes to the Biblical passage proclaiming that humanity shall not know the time of God’s judgment. Though somewhat an obvious reference, it also speaks to the nature of memory for Hays–the hour and the day are hard to sort for him as the past and present fuse together in memories and hallucinations. To minimize confusion in these strands, I’ll break each section down by year, even though the episode itself presents them in a tangle for us to pick at like knotted jewelry chains.

In the 1980 timeline, Hays and West follow up on the communion picture, visiting the church where Will had his first communion and learning that Julie supposedly talked of a special aunt, though she did not actually have one. Another revelation is that the creepy dolls, called chaff dolls, were made by local Patty Favor and sold at the church’s fall festival, including a large number to a black man with a dead eye, presumed to be Sam Whitehead. Although race has been danced around this season, this lead demonstrates first hand how complicated the issue is, particularly for Hays.

His visit to the black neighborhood to ask questions leads to tensions because the community members see him not as one of their own, but as “other” due to his police officer status. Whitehead, like so many leads this season, appears to be another dead end (as Freddy Burns will later in the episode). However, how the sequence escalates, and West’s own admission of his prejudices, provides great insight into how Hays views himself within his varying roles. Even in the later scenes, such as his date with Amelia, he seems like a man lost, trying desperately to cover it.

One annoyance: Pizzolatto loves to drop in references to memory in the past timeline dialogue. They call attention to themselves more than aiding the narrative in any constructive way. More effective are his considerations of the grieving parents. Tom is barely holding himself together, requiring West’s intervention. As we know West will become key in his future sobriety, showing the origin of that budding relationship indicates that Hays is not the only one whose life was altered by investigating the case. Likewise, Lucy (predicting her eventual overdose) is punishing herself for losing her children because she has “the soul of a w***e.” 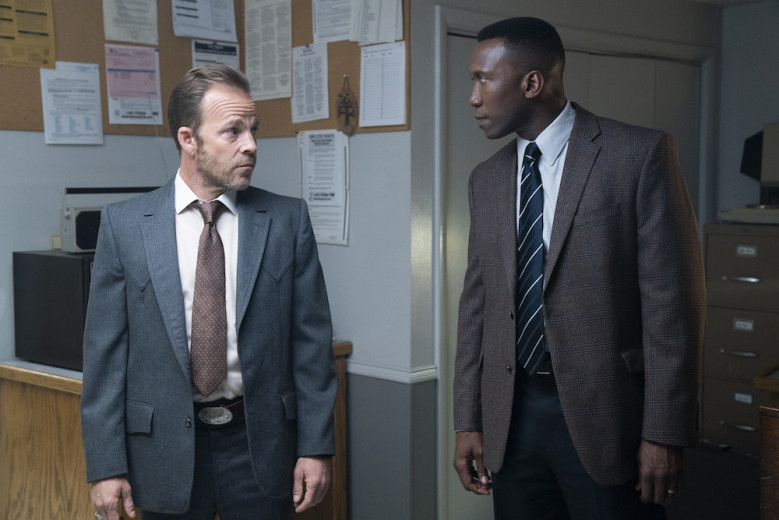 The 1990 narrative showcases the obsessive nature of Hays’ mind. His excitement about returning to the case may be partially escaping the desk, as he argues to Amelia when she is less than supportive. Greater than that, however, would seem to be the absence of closure for Julie Purcell. He systematically reviews the Walgreens’ tape until he catches sight of her.

Though it had previously been mentioned that someone was arrested for Will’s murder, it’s been kept under wraps until “The Hour and the Day”, when it’s revealed that Woodard “The Trash Man” was convicted. Logically, it shouldn’t be that surprising, given that the community had convicted him based on being, like Hays, an “other” (the episode ends the 1980s timeline with him being chased down by an angry mob). Perhaps that will be the pervasive theme of this season–how we view those who, while not deviants (like say, the Yellow King), exist on the edges of the community. Minority cops, struggling veterans, neglected kids who don’t laugh and play dice games in the woods.

Finally, in 2015, Hays is resuming his focus on the case, revisiting the case notes and documenting as much as he can before his mind betrays him. This includes begging his son, cop Henry (Ray Fisher) to help him track down West and asking to see whatever the film crew has found in their research. Yet this return to the case that possibly broke him does not fix the pieces falling away, as he hallucinates people he killed in Vietnam. Is the car outside real? Or another trick of memory?

Next week looks like another West-Hays reunion, this time in 2015. The season is halfway through and though there are a number of possibilities, I wonder if in the end, we will ever really know what happened to Will and Julie. Or if we do, can we trust what we are told?