Highly ambitious, and very amusing. Driving While Black is a film that makes a bold statement which gets slightly lost within the film’s plot. The film is held together by a compelling performance from Dominique Purdy.

Highly ambitious, and very amusing. Driving While Black is a film that makes a bold statement which gets slightly lost within the film’s plot. The film is held together by a compelling performance from Dominique Purdy.

Paul Sapiano’s Driving While Black was shot in 2015, but is only being released now. However, it is still relevant in today’s social climate. And, despite being a comedy, this is a film with lots to say that isn’t afraid to speak its mind. To those who haven’t come across the term “Driving While Black”, it is a phrase that refers to the racial profiling of African-American drivers. The phrase implies that a motorist might be stopped by a police officer because of a racial bias and not because the driver has violated any traffic law.

The film centers around Dimitri (Dominique Purdy), who seems aimless in his life. He’s a pizza delivery man and wannabe artist, who smokes a lot of dope and spends most of his time driving around L.A. whether it be for his job, with his friends, or escorting his drunk girlfriend home from a Halloween party. Unfortunately, we quickly learn that Dimitri falls foul to racial profiling by the LAPD. The film’s main narrative centers on Dimitri trying to make his way to a job interview (as a celebrity home tour guide), but it’s easier said than done, as Dimitri is all too aware of the issues that one simple drive across L.A. can bring.

The film opens with Dimitri driving around in an expensive car at night. Of course, he’s pulled over by an obnoxious cop who seems to take delight in asserting his authority over our main character. Shot with a mixture of extreme, unsettling close-ups and wide shots to show the vast empty L.A. streets, this is a scene which wouldn’t seem out of place in a thriller. As two more cops arrive wearing KKK hoods, Dimitri quickly wakes up to reveal it was just a bad dream. From the onset, Sapiano makes a bold statement here; addressing what many would undoubtedly state as a fact: there are undoubtedly some police officers who are racist and have ill intentions. 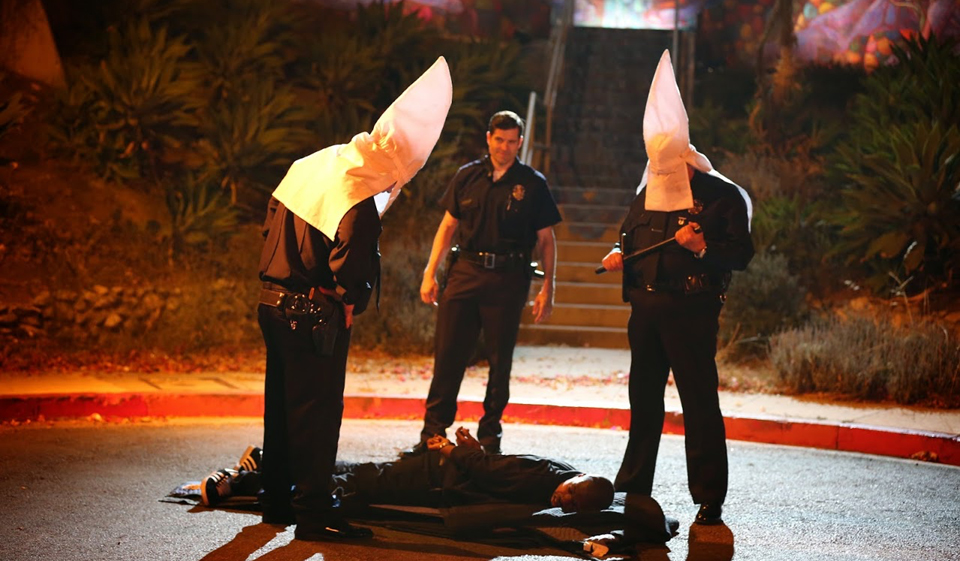 As the narrative unfolds, we discover more about Dimitri’s past. Throughout his life, since a young boy; he has had to face harassment from the police, and comments on how he has developed a sixth sense to detect when there is a patrol car around. We also begin to spend more time with the police officers, where we discover that they are quite complex characters with their own backstories which helps to explain some of their behavior. The film is at it’s most interesting when we switch to a more serious tone and watching the debriefing scenes at the police station helps to keep the film grounded in a sense of reality. We touch upon issues of sexism and homophobia in the police force, which makes the viewer empathize with certain police officers such as Officer Borty-Lio (Sheila Tejada) who not only has to face sexist comments in the workplace but comments about her own ethnicity.

Despite the film’s obviously low budget, it does it’s best to be creative in its use of editing, with split screen and jump cuts, and it’s technically impressive for an indie film. The film’s slick and stylish cinematography from Bryant Jansen helps to bring this underworld of L.A. to life. This is an environment that many are probably unaware of. The film reveals that many seeking the American dream find themselves struggling to make ends meet. We like to think of L.A. as being the place where dreams are made, but it is a deeply troubled city with an ugly past that Hollywood and the film industry fight to distance themselves from.

One major criticism of Driving While Black is that there are so many characters that it is often hard to keep track of who is who, and how they play a role in the film’s climax. Still, each character seems to be distinct with their own history, which is a testament to Dominique Purdy and Paul Sapiano’s screenwriting. It is a shame that the film’s runtime isn’t longer, because it would have been nice to have spent longer with some of the characters.

Driving While Black would have benefitted from having a tighter script, and its climax seems rushed which lessens its impact. Overall, you have to admire Purdy and Sapiano’s ambition and decision to address this issue. Sadly, the film doesn’t quite reach the levels of satire as Boot Riley’s Sorry to Bother You, nor does it reach the comedic boldness of Spike Lee’s BlacKkKlansman; but it is still a quite entertaining and highly enjoyable film which has some genuine laugh out loud moments.