It’s pretty easy to figure out where you’re going to come down on Alita: Battle Angel. As always, it depends what you’re looking for. Do you want slick and inventive action sequences and bizarrely impressive visuals that consistently blur the lines between live-action and computer-generation? Or do you want a story that makes a decent amount of sense, populated by characters that think, feel and behave like actual human beings – even if, in this particular case, some of them aren’t? Alita only provides one of these things, and you can probably tell by the titular protagonist’s wide-eyed expressiveness which one.

Adapted from Yukito Kishiro’s manga-based anime Battle Angel Alita, meddled with for quite some time by James Cameron and Laeta Kalogridis and brought to live-action life by Robert Rodriguez, this is a movie with a fairly complex heritage that nobody seems able to completely untangle. Cameron retains writing and production credits, but Alita: Battle Angel isn’t strictly a Cameron film; doesn’t really feel like one, either. It’s a lot messier and less focused than, say, Aliens, although most films are, and it has a pulpy cyberpunk aesthetic that pays frequent and obvious tribute to influences that include Rollerball, Ghost in the Shell, and Ready Player One. Its character writing is too thin and its world-building too thick; there’re easily one or two more films to be mined from the material, although this one doesn’t quite justify them. 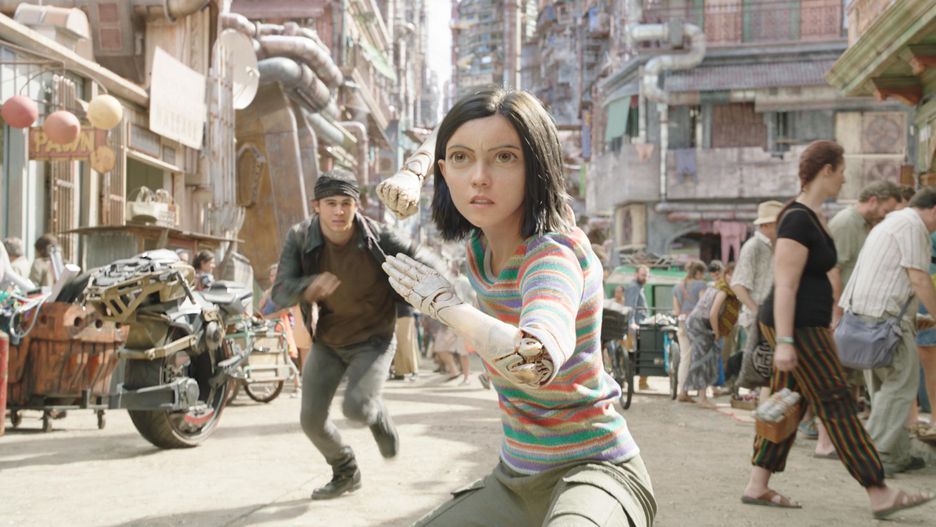 The film is set in the far-flung future of 2563 where – as the genre insists – society has been rigidly stratified by class and a budget-gobbling futuristic sport called Motorball dominates the lower-class scrapheaps. It’s among those scrapheaps that cyberneticist Dr Dyson Ido (Christoph Waltz) discovers the core of a highly-advanced warrior cyborg with a teenage-girl brain, whom he rebuilds and christens Alita, after his dead daughter. This new Alita (Rosa Salazar), brought stunningly to life not only by Ido but by the unknowably talented eggheads at Weta Digital, has the charming naïveté of a kid but also the suppressed a*s-kicking instincts and ability of the warrior robot she truly is.

Robert Rodriguez, naturally, is having a blast with all this, and whenever he’s allowed to run riot with the studio’s money he pulls off a fair number of glorious, rating-straining action beats that are worth the price of admission alone. Alita: Battle Angel could operate in this mode forever and never get boring, such is its sheer style and verve, but it’s not enough for a mainstream feature-film to be all action, all the time. And whenever this one tries to be anything other than a spectacle – whenever it tries to be, ironically, human – it falls flat on its expensively-rendered face.

It’s a shame, really. But the unforgivably messy plot of Alita: Battle Angel will be completely intolerable to many; it picks up and drops threads seemingly arbitrarily, conjures a thoroughly dull romance between Alita and some handsome nonentity (Keean Johnson), and blunt-forces its way out of corners by just crowbarring characters and plot elements wherever they’ll fit. The cynical obviousness of its sequel-baiting cliffhanger ending also leaves a sour taste, but I’d be lying if I said I wouldn’t watch another instalment of Alita’s bloody awakening, if only to see what bonkers s**t Rodriguez comes up with next.