“You Owe Me A Unicorn” smartly took the time to strengthen its central relationship, while also shunting the second instalment towards a moving (if contrived) conclusion.

“You Owe Me A Unicorn” smartly took the time to strengthen its central relationship, while also shunting the second instalment towards a moving (if contrived) conclusion.

This recap of The Passage Episode 2, “You Owe Me A Unicorn”, contains spoilers. You can check out our thoughts on the previous episode by clicking these words.

Well, I got my wish. After the opening episode of Fox’s The Passage felt just a little overstuffed and chaotic, “You Owe Me A Unicorn” provided a welcome pumping of the brakes. As suspected, the beating heart of this show is the relationship between Brad Wolgast (Mark-Paul Gosselaar) and Amy Belafonte (Saniyya Sidney), and it makes sense, so early in the season, to allow that burgeoning father-daughter dynamic room to breathe.

It’s fitting, then, that “You Owe Me A Unicorn” featured an early scene of the pair impersonating a father and his daughter. It’s a cute moment of levity, but it’s building towards a sentiment that’ll pay off by the end of the episode and presumably throughout the season: Wolgast won’t leave Amy, and Amy won’t leave Wolgast, a pact established when Wolgast passes out from his gunshot wound and a panicked Amy has to call his ex-wife, Lila (Emmanuelle Chriqui), for a crash course in keeping him alive. 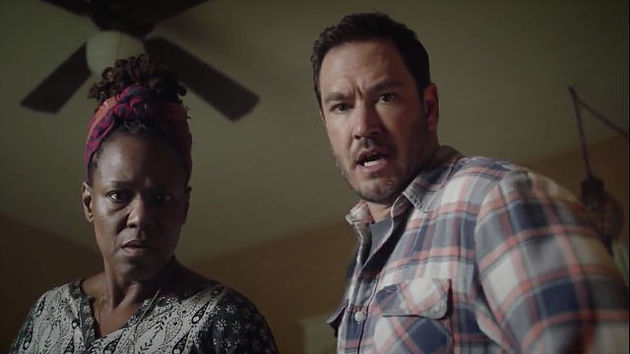 We’ll return to these two momentarily. In the meantime, there are flashbacks to enjoy. These delve briefly into the backstory of Dr. Jonas Lear (Henry Ian Cusick) and I suppose, by extension, Project Noah itself, where upper management – particularly Lear and Dr. Major Nichole Sykes (Caroline Chikezie) – are still debating the ethics of using a child as a guinea pig for their vampire virus. But thanks to some helpful backstory, we have a better sense of the drive behind the sinister project. Lear’s wife was suffering from early-onset Alzheimer’s, and he teamed up with pre-vampire Tim Fanning (Jamie McShane) to cure her. It’s a noble goal, and contrasts pretty starkly with Fanning’s motivations; before he became Patient Zero, he was a celebrity neurologist clearly more interested in a quick buck than curing all diseases.

That’s probably why Fanning is up to no good in his new form, teaming up with the sultry Babcock (Brianne Howey) to mentally torment Carter (McKinley Belcher III), thus proving that the vampires are not only able to influence their captors but to do so in twos. I’m sure that bodes well – although I can’t say I was particularly devastated when the lecherous maintenance man got his face chewed off by Babcock.

Anyway, the highlight of “You Owe Me A Unicorn” was a sequence set at the house of Lacy (Kecia Lewis), Wolgast’s old Navy instructor whom he and Amy turn to for help. Still on their trail is Richards (Vincent Piazza), who is able to track them to the house for surprisingly contrived reasons, but it amounts to a fun shootout in which Lacy gets to do some badass older woman action (RIP). But when Wolgast attempts a typically heroic self-sacrifice to buy Amy time to escape, she instead surrenders herself. “You don’t leave me, I don’t leave you.” Touching! The Passage might not be the smartest network TV show in the world, but it’s smart enough to realise what people are tuning in for.