Light on action and heavy on flashbacks and information, “That Never Should Have Happened to You” was nonetheless the best episode of The Passage thus far, proving that the show is speeding off in an interesting direction.

Light on action and heavy on flashbacks and information, “That Never Should Have Happened to You” was nonetheless the best episode of The Passage thus far, proving that the show is speeding off in an interesting direction.


This recap of The Passage Episode 3, “That Never Should Have Happened to You”, contains spoilers. You can check out our thoughts on the previous episode by clicking these words.

The Passage – somewhat implausibly, given the concept – just keeps getting better and better. And even more implausibly it’s doing so by making use of the laziest and tritest storytelling in all of television: Flashbacks! My old nemesis returns in earnest in “That Never Should Have Happened to You”, but all those hours of covering The Walking Dead have inured me to such things. Plus the ones in The Passage are alright.

Babcock (Brianne Howey) is the primary focus in “That Never Should Have Happened to You”, with Richards (Vincent Piazza) receiving some additional characterisation almost by extension, so it’s nice to see The Passage added some welcome complexity to their villains. Babcock’s backstory is utterly tragic – she was molested by her step-father with the knowledge of her mother, who told her she “could have said no” and got shanked for her ridiculousness – and Richards is much more interesting with a sympathetic side, even though the character remains a bit thin.

Project Noah, meanwhile, are still reeling from the shock of Babcock having chowed down on a member of staff. Dr. Jonas Lear (Henry Ian Cusick) sees it a prime opportunity for studying his patients, and he comes to some rather obvious realisations: They can communicate telepathically, and Babcock is very likely doing so with Fanning (Jamie McShane). With things getting out of hand, the decision is made to “put down” Babcock; an ideal fully endorsed by Richards, although not for long. Under encouragement from Fanning, Babcock shows Richard’s choice flashbacks explaining why and how she ended up on Death Row in the first place, and in a sympathetic turn of events he intervenes in her execution. 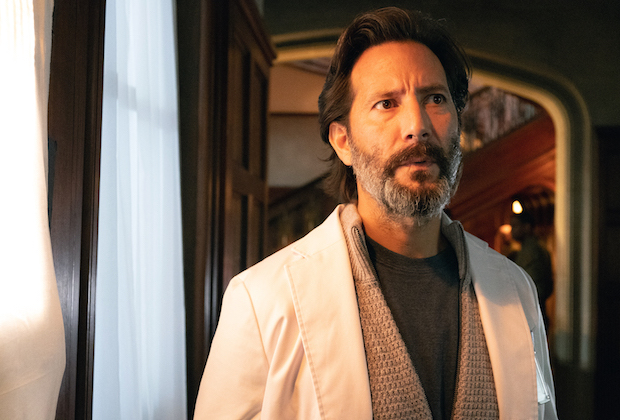 Wolgast (Mark-Paul Gosselaar) and Amy (Saniyya Sidney) arrive at Project Noah in “That Never Should Have Happened to You”, and their charming relationship continues to develop, as do their own individual personalities – particularly Amy’s, who is left to her own devices a lot and shows a generous helping of initiative that is rare in characters who’re so young. Saniyya Sidney remains a revelation and still the biggest reason to watch The Passage, although Gosselaar (this show’s casting must really be tormenting people like me who have to triple-check these spellings) is doing a fine job of balancing his tough-guy persona with a softer, more caring side, even though it’s still a bit weird seeing Zack from Saved by the Bell with a beard.

Amy is quickly injected with the vampire virus by Sykes (Caroline Chikezie), which opens her up to manipulation from Fanning, whose influence is beginning to spread throughout the facility. Thankfully most of the major characters are well-aware of this, which means we won’t have to endure weeks of them painstakingly figuring out how the vampires are outsmarting them. So, thank goodness for that.

In the meantime, let’s take a brief account of all the other stuff that occurred in “That Never Should Have Happened to You”, most of which were minor developments that’ll presumably pay off later. Wolgast formed a tentative alliance with Lear, who opened up about what exactly Project Noah has been up to with the inmates he convinced to participate; Lila (Emmanuelle Chriqui) enlists the help of a journalist to look into the suspicious “deaths” of those inmates, especially Babcock; and it turns out Lacy (Kecia Lewis) survived! She’s ready for more older woman action, and I certainly hope she finds it.

All in all, I’m struggling to find much fault with “That Never Should Have Happened to You”, which proved that The Passage doesn’t need breakneck action to be compelling. This is shaping up to be one of the better shows airing right now.