Inching us closer to the truth, “Hunters in the Dark” gives plenty of plot without sacrificing finesse.

Inching us closer to the truth, “Hunters in the Dark” gives plenty of plot without sacrificing finesse.


This recap of True Detective Season 3. Episode 6, “Hunters in the Dark”, contains spoilers. You can check out our thoughts on the previous episode by clicking these words.

You hear that, True Detective fans? That is the tick-tock of our narrative clock as we move ever closer to the resolution of this excellent season. “Hunters in the Dark” gave us plenty of things to love–plot, solid performances, and a few well-earned twists.

The 1980s timeline, which opens the episode, is all about the after: the afterglow of Amelia and Hays’ first time together and the aftermath of the Woodard shoot out. Everyone seems ready to shut the case down since Woodard is a reasonable (and very dead) suspect. Hays doesn’t seem convinced, but he’s overruled.

The key timeline this week is the 1990s, where Julie’s phone call (as Mary July) indicates her father, Tom, had something to do with her disappearance. Tom does not take these accusations well, with Hays and West questioning how they could have missed this possible lead. Further investigation into Tom leads our hunters deeper into the mystery. It turns out Tom may have been closeted and is most likely not the father of either of his children, despite having raised them. Hays and West also discover Harris James, the officer who found the backpack at Woodard’s house, left the force shortly after the shootout to go into private security for Hoyt, the food processing plant where Lucy Purcell worked. (We learn in 2015 that he disappeared at some point during this investigation.) 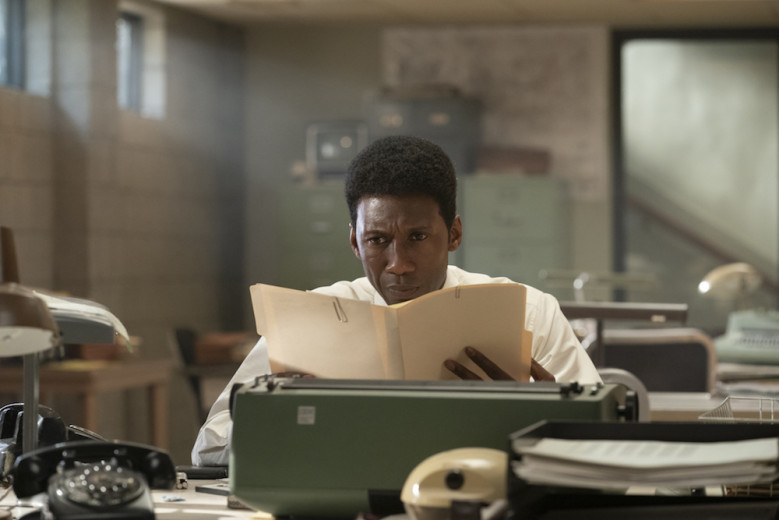 They also interview a strung out Dan O’Brien, that sketchy cousin, who wants money for information. Though he doesn’t tell the detectives, a beating from Tom gets him to reveal that Lucy was murdered when she asked for more money than she had already received for covering something up. This leads to the big reveal of “Hunters in the Dark”–Tom breaking into the Hoyt compound and walking into a pink room, asking “Julie?”. We do not see what he is looking at, but we do see Harris coming up behind him before the episode cuts to black.

The men are not the only detectives this episode: Amelia is following the trail of Mary July. As a runaway, she talked to various people about the pink room or being queen in a castle. All this fuels the idea that the Hoyt organization is running some sort of pedophile ring for wealthy men. In the other big reveal of “Hunters in the Dark”, a one-eyed man, like the one described in the sedan during the original investigation, turns up at Amelia’s book reading, shaming her poor theories and exploitation of the victims before storming off. Surely this man is one of the missing pieces that we need to truly understand what happened.

But that solution is not something reached in the 1990s as West and Hays are still trying to solve the case in 2015. As with last week, these scenes are some of the most subtle yet effective. When Hays leaves the room to go to the bathroom, only to come back confused as to the year and how recently he’s seen West, the moment that passes between them has a poignancy that grounds the otherwise plot driven episode.

Two episodes left and we have so many questions to answer. Who killed Dan? (My money is on Harris.) What really happened to Julie? What happened to Tom? (Note that the 2015 timeline has made no reference to his fate.) Who did Hays and West kill? A few weeks ago, I said that I had a feeling we will leave this season not fully knowing what happened. After all, we’ve been repeatedly told and shown that Hays’ memory is not to be trusted. So what, if anything, can we believe?