A fascinating tale with lots of interesting perspectives. Lorena comes close to greatness but the scale of its ambition causes it to fall just short.

A fascinating tale with lots of interesting perspectives. Lorena comes close to greatness but the scale of its ambition causes it to fall just short.

New to Amazon Prime this week is Lorena, a documentary series exploring the very public and troubling case of Lorena and John Wayne Bobbitt. For those not familiar with the events that took place in Virginia in 1993; after years of domestic and sexual abuse, Lorena Bobbitt made international headlines after she took the extreme step of cutting off her husband’s p***s as he lay in a drunken stupor. This four-part documentary unpicks the events leading up to the incident and beyond, including the media storm that surrounded the act and the court cases that followed.

I was not already familiar with this story when I sat down to watch Lorena over my breakfast (note, do not watch this over breakfast) and so I was not sure what to expect. The series opens with a pretty graphic description of the p***s cutting off and how it was subsequently located (in a nearby field having been flung from a car window) and then re-attached. With a hefty four-hour runtime Lorena has plenty of runway to dig into the minutiae of this fascinating series of events and very few grizzly details are spared.

The filmmakers have managed to secure some amazing access to a number of people directly involved in the incident, their marriage (including both Lorena and John Bobbitt) and the investigators, lawyers and various officials who played a role. Whilst lending the documentary great content and authority it does also present the filmmakers with an enormous amount of material to choose from which is ultimately to its detriment. 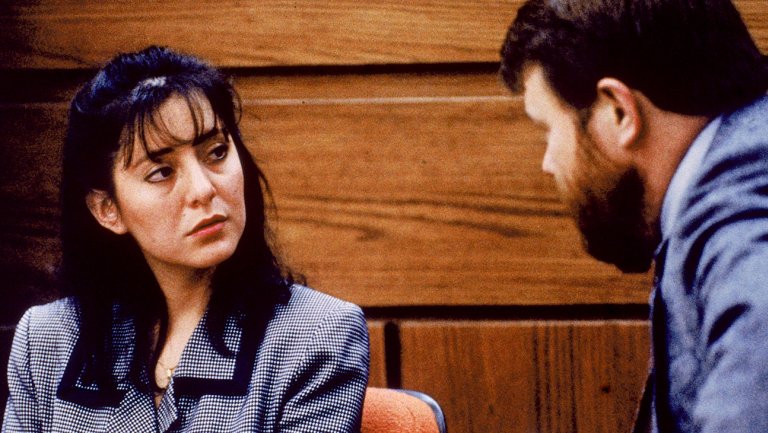 Lorena tries to use the story of Lorena and John Bobbitt to tell us a wider story, one that makes a comment on society and how we tend to engage with salacious and high profile incidents like this. This story is especially interesting in the wake of #MeToo, as we get some insight into how Lorena Bobbitt was characterised by the media. She was simultaneously used as a symbol of empowerment by women’s groups (who we are reminded had at this time only recently successfully had the law changed to recognise rape within marriage as a crime) and the butt of the joke. He was portrayed as both a monster and a victim.

There are archive clips of famous stand-up comedians of the time including the story in the routines including Robin Williams, Whoopi Goldberg (who they interview) and David Letterman. Reminding me of a similar device used to greater effect in the outstanding Asif Kapadia documentary, Amy. Lorena Bobbitt was a victim of sexual and domestic abuse and was not treated with anything approaching any care by the media. John Bobbitt was allowed to make the most of his opportunity in the limelight, selling t-shirts making light of the incident and appearing on Howard Stern. Until that is he continued his pattern of abuse in future relationships and was ultimately jailed for burglary.

The problem with Lorena is that it ends up falling between two stalls. In trying to tell a wider story through the lens of one incident it often ends up losing focus. The film itself comes back to the incident again and again and gets distracted by the sheer amount of material it has at its disposal. Recently, this method of storytelling was used to great effect by OJ: Made in America which juxtaposed the OJ Simpson murder trial with a wider story of race in America. Lorena does not quite manage to achieve this level of social commentary but by introducing those elements to it’s narrative it does not quite manage to tell a tight, self-contained story either.

The incident itself is fascinating; and not being familiar with it before viewing I was engaged enough to watch it through in more or less in one sitting. It just does not quite manage to achieve the lofty ambition it set for itself to tell a bigger story.