“An Obol for Charon” was a fine episode of Star Trek: Discovery, weaving together multiple life-or-death crises and building to optimistic, emotional conclusions.

“An Obol for Charon” was a fine episode of Star Trek: Discovery, weaving together multiple life-or-death crises and building to optimistic, emotional conclusions.

This recap of Star Trek: Discovery Season 2, Episode 4, “An Obol for Charon”, contains spoilers. You can check out our thoughts on the previous episode by clicking these words.

“An Obol for Charon” was the best episode yet of Star Trek: Discovery’s second season and here’s why: It just said, “F**k it.” There were no stranded Luddite communes on distant planets or alien political squabbling in this episode. Even the season’s overarching search for Spock and the unravelling of the Red Angel mystery was barely mentioned. Instead it took place entirely on the Discovery itself, concerned virtually all the crew, and was frankly just an excuse for everyone to Science the s**t out of everything. And yes, that’s capital-S Science.

This is the kind of hour that highlights everything Star Trek: Discovery does well, even if it did also shine a light on a couple of things it does poorly, such as moving too quickly and cramming too many impending catastrophes into one episode. But whenever this show really makes an effort to embrace its underlying sentiments of teamwork, optimism and scientific cooperation, it’s able to manifest excitement and emotion like almost no other.

The problems in “An Obol for Charon” were as follows: A giant old asteroid thing is killing the ship, a supremely pissed-off mycelial alien is killing Tilly (Mary Wiseman), and a unique Kelpian illness is killing Saru (Doug Jones). Goodness, if Discovery was really of a mind to commit to the Game of Thrones aesthetic we saw last week, this could have been the “Red Wedding” episode. Luckily Discovery is still resolutely its own thing, and all problems can be solved with just a little bit of outside-the-box thinking. Let’s assess. 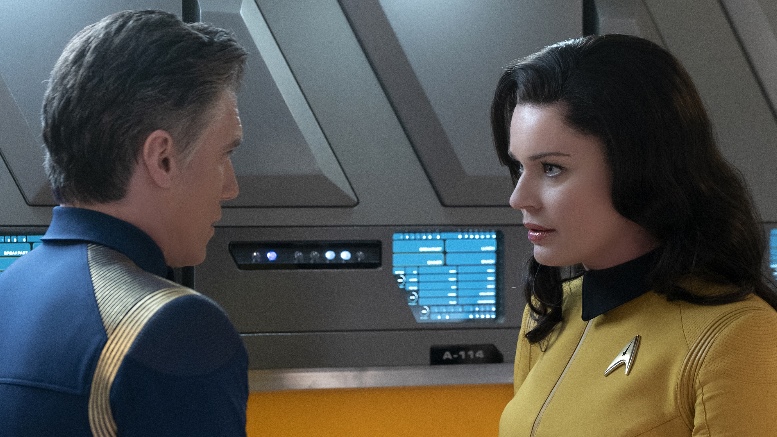 So, the giant, ancient space-rock is dying and attempting to communicate, which it takes a while for everyone to figure out. Its messing with the ship’s systems causes all kinds of confusion and problems, so I guess it’s understandable, but all the thing really wants to do is pass on its legacy and experiences before it snuffs it; 100,000 years of information for the betterment of the galaxy, thanks very much. This also relates to Saru’s problem. His biological clock is ticking because his species has been bred for servility and docility; because he’s uniquely empathic, he’s picking up on the space-rock’s willingness to die, which kelpians themselves experience whenever they’re due to be culled and slaughtered by their slavers. In an extremely emotional scene with Burnham (Sonequa Martin-Green), he asks her to basically euthanize him by removing his ganglia, which in the nick of time fall out on their own, and he’s fine. Better, even. Thus it’s revealed than Kelpian biological fatalism is just the legacy of their oppression – how very Star Trek!

That just leaves Tilly, whose fungal issues are a bit less uplifting and a lot less cut-and-dry. The thing’s trolling the engineering department as revenge for the Discovery’s spore drive having decimated the mycelial network where its species lives, first by latching onto Tilly, then by sucking her into the network while Stamets (Anthony Rapp) and Reno (Tig Notaro) are on a mushroom trip. Cliffhanger!

“An Obol for Charon” was great, obviously, and while ordinarily I’d probably complain at how busy it was, unlike, say, “New Eden”, this episode managed to interweave its various crises so that they all complicated and informed each other. When you really take stock of what occurred, the writing here was impressive; it was juggling multiple impending catastrophes alongside character developments and Star Trek’s trademark humanistic optimism. It was a fine episode. Hopefully we get a lot more like it.