“I Want to Know What You Taste Like” sped by with the usual energy, but it didn’t move the plot in any major new directions and might have been a bit speedy for its own good.

“I Want to Know What You Taste Like” sped by with the usual energy, but it didn’t move the plot in any major new directions and might have been a bit speedy for its own good.


This recap of The Passage Episode 6, “I Want to Know What You Taste Like”, contains spoilers. You can check out our thoughts on the previous episode by clicking these words.

As always, The Passage moved along at a breakneck clip in the latest pleasantly-titled episode, “I Want to Know What You Taste Like”, a title taken from a line uttered by Babcock (Brianne Howey) to Dr. Major Nichole Sykes (Caroline Chikezie) after an hour of what seemed like bonding. That was one of two major plotlines juggled this week, the other being Project Noah desperately trying to keep the escaped Winston (Brett Gentile) from revealing the top-secret shenanigans to the outside world.

As Winston’s limited smarts gradually gave themselves over to an increasing bloodlust, a bored Amy (Saniyya Sidney) went out of her way to help. She’s bored, bless her, and why wouldn’t she be? She’s quickly discovering burgeoning superpowers, and her closest confidante, Wolgast (Mark-Paul Gosselaar), just wants to treat her like the same-aged daughter than he lost. She knows she can do more, and so does Guilder (James Le Gros), although I’m sure they don’t have the same kind of approach in mind. 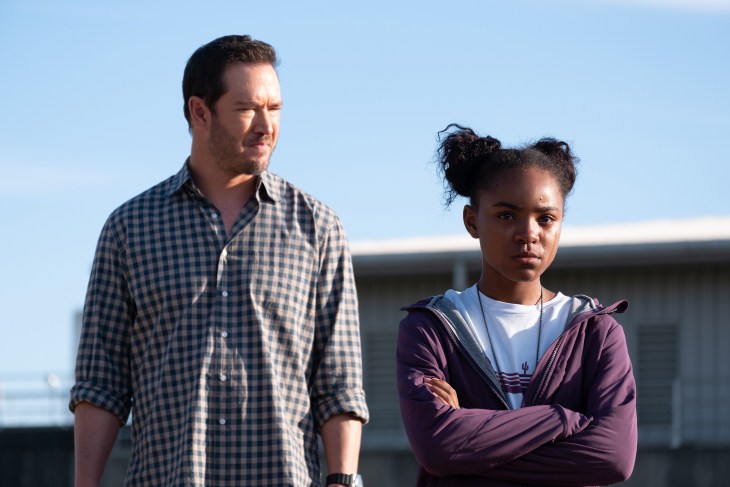 While all this madness was occurring, elsewhere in “I Want to Know What You Taste Like”, Babcock continued to manipulate Sykes, first by finding some common ground in their traumatic pasts and attempted suicides, then by playing the sympathy card. She was bored, like Amy, and wanted a pizza and a horror movie; Sykes accommodated her at first, but how much can she really have in common with a psychopathic, telepathic vampire? Whenever Babcock entered her mind, which she did on a couple of occasions, the conversation was a lot less pleasant. There are some things even David Cronenberg’s The Fly can’t heal.

Sykes’s developing guilt and sympathy for the patients, whom she rightly feels responsible for, has been brewing for a while now, so this turn of events isn’t entirely unexpected. Her pact with Jonas (Henry Ian Cusick) to wipe them all out felt like a bit of leap, though. Luckily, judging by how quickly Winston chewed through multiple victims, and the obvious link between all the vampires, even the ones, like Amy, who aren’t doing Fanning’s (Jamie McShane) bidding, that whole idea is much more complicated in practice than in theory.