Abby’s has potential, especially in its lead, but the pilot episode was a messier and more unrefined affair than NBC’s new sitcom needed.

Abby’s has potential, especially in its lead, but the pilot episode was a messier and more unrefined affair than NBC’s new sitcom needed.

The Abby’s pilot assures us that it was all filmed outdoors in front of a live audience, presumably to evoke the sense of community that informs its premise and characters. Some of the laughs, then, are genuine, but the distinctly off-kilter and unwelcome presence of a laugh track is recognizable too — the first of a couple of problems that beset NBC’s new multi-camera sitcom.

The second is that the show, which concerns an anti-authoritarian bisexual ex-marine who converts her backyard into an exclusive neighborhood watering hole, is unashamedly trying to evoke Cheers. And that’s never a good idea for a sitcom so early in its run, so unsure of itself and its various thinly fleshed-out patrons. Some of the elements are there — including Michael Shur as a producer, who has never made his love of Cheers and Ted Danson a secret, and Natalie Morales in the title role — but some others are crucially absent, leaving Abby’s, for now, in a weird spot where it’s far creakier and more unrefined than it ought be. 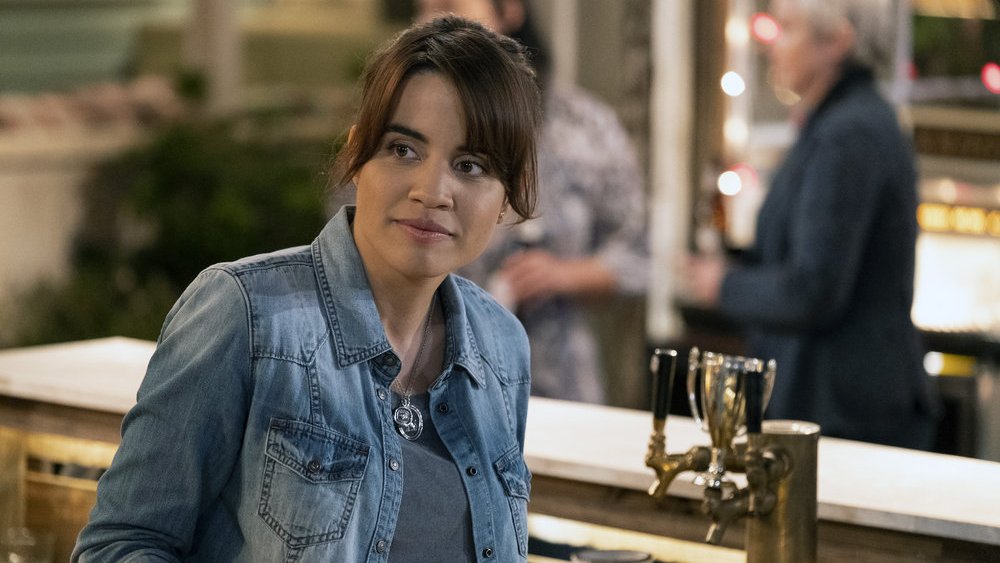 Morales (seen as recently as today in the third season of Santa Clarita Diet) makes a solid impression in a long-overdue lead role that is refreshingly complex, though, and there are some gags that land despite the background guffawing ensuring that you notice them. It’s more low-key and naturalistic than sitcoms tend to be, which is fine in theory but not particularly pacey in practice, and the bar’s regulars — including Beth (Jessica Chaffin), Rosie (Kimia Behpoornia), Fred (Neil Flynn), Bill (Nelson Franklin) and James (Leonard Ouzts) — are likable sorts who you can imagine will rise to the challenge whenever they’re given more to do.

Whether or not they will be is what remains to be seen, but I’m hopeful. If Abby’s is smart enough to lean into the timeless appeal of colorful characters unloading their baggage onto a well-intentioned barkeep, it’ll likely go places. But for all the fuss of its nocturnal, outdoorsy production, the shadow of Cheers is still a long one, and difficult to get out from beneath.