An Interview with Marcus H. Rosenmuller

Out in cinemas this Friday comes The Keeper, the story about the former POW and German soldier who famously broke his neck in the FA Cup final and stayed on to finish the game. RSC had the chance to catch up with the film’s director this week as he made his way across London to attend a screening of his new film.

You can see what we thought of his film by clicking these words.

RSC: So Marcus, are you a big football fan?

Marcus: Yes, I am, a big football fan, on the one hand, I am a big fan of Bayern Munich.

In my youth, they were such a good team and I liked them very much. There was Soren Lerby, I don’t know if you know him, from Denmark? I was a big fan of him and he was playing in the midfield. But on the other hand, I am also a fan of playing myself. It’s a pity I had to stop two years ago because my knees are damaged now, but I do like to play, always at a lower level though.

RSC: I am a terrible footballer myself but an enthusiastic one nevertheless! So how did you come across the story of Bert Trautman? Is it something that you were familiar with before you started this project?

Marcus: No, it was crazy because like I just told you I am such a big football fan, but I’d never heard about this story. I’d made this kids film and the producer and my friend Robert Marciniak, he came in to the editing room, this is 12 years ago, in 2008 or so, and asked me if I knew this guy. He was reminded because there was at the time the European Championships and the footballer Petr Cech from the Czech national team wore a protector because he had broken his head, he was reminded because his father had always told him about this guy who played for Manchester City when he was 12 years old. So, the story came back to him, he told me to pitch me and at the beginning, I thought “that can’t be true” and so we thought, maybe we have the chance to make a film out of it.

It happened that Trautman was given a prize in the Autumn then, in 2008 in Nuremburg. We got in contact with his foundation and were allowed to talk to him for 10 minutes or something and we offered him this idea. We want to make a film, but we realize there is more than the broken neck, we want to include societal events, cultural events as well. Yeah. He was open-minded, and he invited us to come to Valencia for one week. We did long interviews, so this was the basis of the film, although other researchers came along to create the story. What is the extract, what is the essence of my story? There were so many exciting experiences he told us about, so it needed a long time to finish the film

RSC: I was amazed actually because a bit like your partner, I had grown up knowing about the story of Trautman in the cup final, breaking his neck and playing on. It wasn’t until I sat down and watched your film that I realized what an incredible story his was and how much else there was to his life. How do you go about packaging that all together into one film, there is so much you could be talking about?

Marcus: Well we concentrated on a certain theme, we also concentrated on a sequence from the end of the war until the tragedy with his boy. I tried to make sense of his feelings of guilt, reconciliation, the love story, all these things put together. There are so many stories in one life and so we had to decide and make our own film with our own attitude on the basis of his stories that he told us.

Marcus: Yeah it was. I can tell you I got to know him three times. The first time was when Robert told me about him and I read about him. The second time was when we were visiting and I realized he never saw himself as a hero, he knew what a symbol he was but he was very friendly and modest and he was on the same eye level as us, I don’t have to look up to him which is nice. The third time, when I realized what he was, is after shooting, I made extra sound recordings in the Man City stadium. I met so many people who still admire him and I saw all the newspaper headlines collected. I was thinking I was exaggerating in my film and then the headlines, there were 600, 800 headlines and there were so many stories about him; he really was a star. I found the newspapers from the mid-late ’50s in Germany, where they celebrated him as the best goalkeeper even though he wasn’t playing for the national team. The German manager wouldn’t let legionnaires play in the national team.

RSC: It’s such a rich life, one thing I noticed is the message of tolerance that runs through the film with the journey that Trautman went on in his life. That feels particularly relevant at the moment.

Marcus: Yes, that’s right. We didn’t want to make the film too moralistic, it should have some humor with such guys as John Henshaw and the Grandmother, Barbara Young and Dervla Kirwan. It’s important that we don’t feel like we are in school with a teacher about to teach something. We like to make entertainment with a deeper sense. This what I always try to do with my films, to have a theme but to also entertain the people. With football also, we tried really hard to make the football scenes. It was really exciting, we were stood so often in front of football pitches thinking “how can we film scenes so in the end, it looks like Manchester City’s stadium or Wembley stadium?” This was the biggest technical challenge. It was a good combination, from production design, extras and certainly digital work.

I always loved to play football in my home village. It’s a small village of about 8000 people and the football scenes were created with the help of my former football trainer. He was coaching them over four weeks, they had to learn the running, so it looked exactly like the goals in the Wembley final. 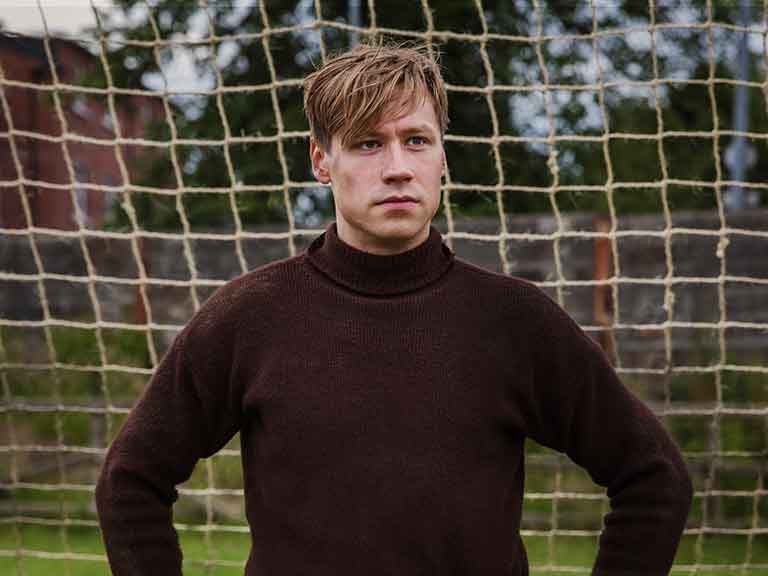 RSC: Wow. It was nice to see a more portly footballer in there, to keep it authentically 1950s.

Marcus: (laughs) That’s funny because I had chosen him! He was a good guy from Bavaria. I found him from casting and he was a little bit overweight but this guy, he was playing in the youth team for Germany but stopped because other things had become more important for him… (laughs)

RSC: So it must have been nice for him to go and play in front of a big crowd and experience all those things again.

Marcus: He was so proud, and it was funny because I didn’t know him. Some of the scenes were shot in Belfast and he came over to Belfast and it was a bit of an adventure for him.

RSC: Is this your first English-language film?

Marcus: Yes certainly, it’s my first English language film. In fact, I never even really made a German film, I always made Bavarian films. In Germany you have very strong dialects, so my films are known as very Bavarian films, so when they are shown in Hamburg they need to be subtitled! (laughs)

RSC: How did you find working with a mainly English cast?

Marcus: Well, for me it was not such a problem because I am always talking with as much energy as I can to tell them what I think the scene should be. I think the bigger challenge is for the actors! They were so nice, I can only praise them, they were supporting me the whole time they wanted us to be successful with this film and make sure every small thing is good.

I have to really emphasise the work of John Henshaw, he really helped me to make the dialect fit to Manchester as a region. It’s already a challenge to just form my sentences so to make it authentic I need the support of John Henshaw and the other actors as well as my co-producer.

RSC: I would never have known that it was a film made by a director who wasn’t familiar with Northern dialects or accents.

RSC: I really enjoyed it, congratulations on a great film, I hope it’s a big success, it’s out on Friday isn’t it?

RSC: Is there anything else you would like to tell the Ready Steady Cut readers?

Marcus: It was just an honour for me to make the film with this British cast, this British co-producer. We made the same journey as Trautman, there is no place for prejudice, if you meet the people you realise working together is the positive way for the future. I don’t want to be too much like a teacher though! Its entertainment with a human, lovely message and I hope this comes out of the film and it finds it audience.

The Keeper is available from Friday 5th April in UK cinemas; check out your nearest screening here https://bit.ly/TheKeeperShowtimes