Another adult animation from Netflix, Tuca & Bertie is a riotous, hallucinatory exploration of female friendship.

Another adult animation from Netflix, Tuca & Bertie is a riotous, hallucinatory exploration of female friendship.

Netflix’s new adult animated series Tuca & Bertie invites some obvious comparisons, most notably to the platform’s own BoJack Horseman, and for good reason. For one thing, this new show has been created by Lisa Hanawalt, a production designer and animator on BoJack, and the visual style is virtually identical. But it has some advantages.

It’s lighter, sillier, and less introspective, for a start; that gives the show less of an alienating self-destructive vibe, even if it doesn’t necessarily give it the same depth and staying power. It has Tiffany Haddish, a current hot commodity who stars here as a toucan alongside Ali Wong as her songbird best friend, both denizens of a wacky anthropomorphized surrealist dream world where logic and rules cease to apply. And it’s so sure of its own appealing strangeness that it never feels try-hard or awkward, even as it consistently deploys exceedingly bizarre details and diversions. 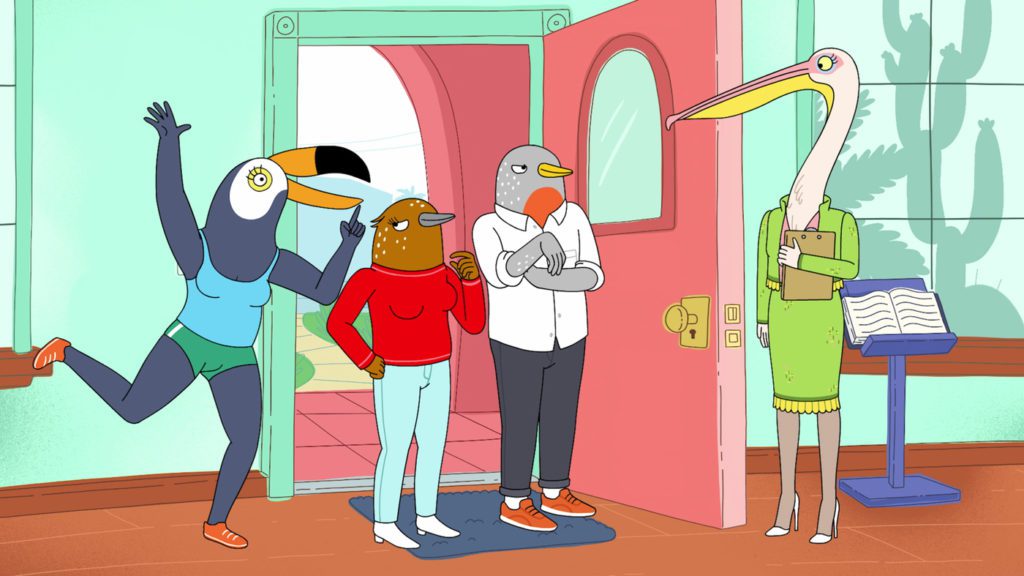 Most — if we’re being honest, almost all — of the appeal here comes from the margins; the details in any given frame that in their off-kilter majesty create an overall sense of off-the-wall experimentalism, like everything from the writing to the animation is just being made up on the spot. There’s no real cohesion to Tuca & Bertie, no sense that it knows what it’s doing, or that all its flamboyant oddness is in service of a broader point. It just simply is. And that’s refreshing in a media climate so stifled by genre and convention and the rote ticking of boxes.

The downside of this approach is that when the show attempts to deal with real-life themes, such as workplace harassment, it can come across as either too on-the-nose or too detached from reality to actually make the points it would evidently like to. That’s a problem, but not a deal-breaking one, especially since establishing the show’s visual and tonal identities seems a much greater concern that tackling social issues. Either way, there’s still a prominent element of introvert-extrovert empowering female friendship which feels provocative in itself, and will likely rile a healthy portion of Netflix’s userbase who’re annoyed by such things — a good thing, probably. Then again, there are a surprising number of breasts in Tuca & Bertie to keep them distracted, so perhaps the show isn’t as whimsically carefree as it seems.