Extremely Wicked, Shockingly Evil, and Vile betrays its premise and becomes the “Ted Bundy Show”, providing the audience with the killer’s highlights reel.

Extremely Wicked, Shockingly Evil, and Vile betrays its premise and becomes the “Ted Bundy Show”, providing the audience with the killer’s highlights reel.

There is no denying that Zac Efron does a satisfactory Ted Bundy performance in Extremely Wicked, Shockingly Evil, and Vile. If you watched the recent Ted Bundy Tapes the main issue attached to the man is that he was too normal, charming, and to some, handsome; women were drawn to him, and experts have attributed that it did not help the infamous case as onlookers could not conceive that such a person could carry out these cruel crimes. Zac Efron does well in portraying the above, but the problem is that it is more “The Ted Bundy Show” than the actual premise suggests, despite vowing to be a film for the victims.

As you open the thumbnail on Netflix, the following premise opens up: “Single mother Liz falls for Ted Bundy and refuses to believe the truth about his crimes for years”. Lily Collins fronts another superb showing as Liz Kendall but for the majority of the film, she is overshadowed and thrown aside, and Ted Bundy is basked in the limelight. Extremely Wicked, Shockingly Evil, and Vile shows off his wit, his apparent charisma, and the number of times he had women turning their heads to look at him. The Netflix film is far from condemning the evil man; the film chooses to show many scenes where he convincingly denied guilt or decided to make the court cases a reality sideshow.

Extremely Wicked, Shockingly Evil, and Vile would have served itself well if it stayed more faithful to the premise and stuck with Liz Kendall, and honed in on Lily Collins’ dedication to the character. Moments where you sense doubt sneaking into Liz’s mind feels much more constructive than seeing Ted trying charm every acquaintance he meets. The Netflix film also extracts a brilliant performance from Kaya Scodelario, who plays Ted’s loyal friend Carole Anne Boone – the actress was barely recognisable, and it only just dawned on me that it was her when the credits rolled. 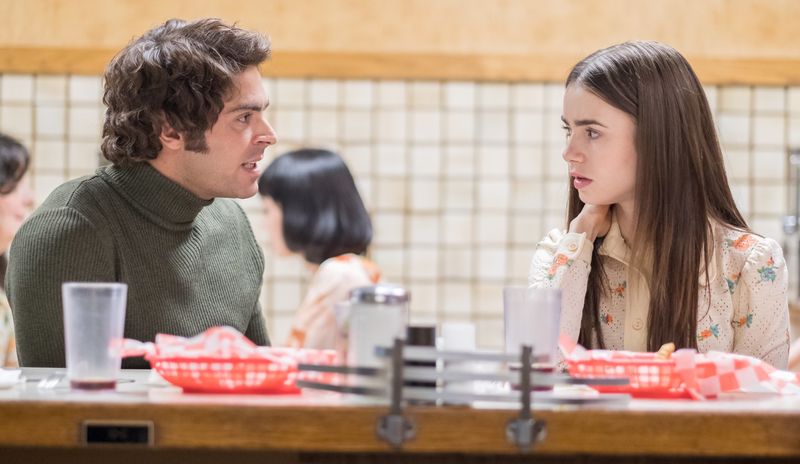 But the more I acknowledge the problems with Extremely Wicked, Shockingly Evil, and Vile the more I realise it is unpreventable to put Ted Bundy centre stage. After reading several responses to the film on social media, I found countless tweets stating that The Ted Bundy Tapes was uninteresting, but the fictional version of events glamourises his role. Ted Bundy enjoyed the celebrity status that came with going to court, he thrived off the public attention, and unfortunately, all this film does is give him what he wants. We all know what Ted Bundy wanted, and Extremely Wicked, Shockingly Evil, and Vile honours his showreel.

If you ignore the main subjects of the Netflix film, then it is well-scripted, consistently acted and remains engaging for its running time, but we cannot ignore the fact that it slightly brushed on Liz’s struggle, and provided more development for her manipulative counterpart. The Netflix film instead wants the audience to make assumptions about her life; did it affect her career? Her mental wellbeing? Her relationship with her daughter? Her story is shockingly thin, offering only snippets once it rides Ted’s top 10 moments.

If it is unavoidable to put Ted Bundy on centre stage rather than delve deeper into the victims, then maybe Extremely Wicked, Shockingly Evil, and Vile demonstrates that the story surrounding the killer needs to be put to bed once and for all.