See You Yesterday is colorful and fun, but it also manages to achieve some critical themes, giving the Netflix film a different genre, almost.

See You Yesterday is colorful and fun, but it also manages to achieve some critical themes, giving the Netflix film a different genre, almost.


See You Yesterday is director Stefon Bristol’s first feature-length film, but the noticeable household name propping up the Netflix original is the producer, Spike Lee, confirming that the story will be shrouded in political messages despite the light-looking, vibrant sci-fi posters. The title of the Netflix film is an earnest giveaway; the central premise is about time travel.

But in its pure form See You Yesterday ties in police brutality and the inexcusable death count in black neighborhoods. Ignoring the fiction, the energy, and the nerdlike lead characters, there is a reality within the story that adds a layer above the narrative. The Netflix film does not even feel like it’s going to contain themes surrounding racial discrimination, and the lightheartedness of two teens creating Spy Kids-type gadgets to adjust the timeline becomes trodden on by the realness of where these teenagers are based.

The two characters, Claudette ‘CJ’ Walker (Eden Duncan-Smith) and Sebastian J. Thomas (Dante Crichlow), are going through the motions of developing technology for a science fair; their idea is to move a person through time. See You Yesterday does not specifically mark them as super-smart, but as soon as they reside in their garage pinpointing technical improvements with their VR headsets, you are given entirely different dimensions to their characters. Their worlds are flipped upside down when CJ’s brother is killed by a police officer while reaching for his smartphone. CJ and Sebastian try to go back in time to fix it. 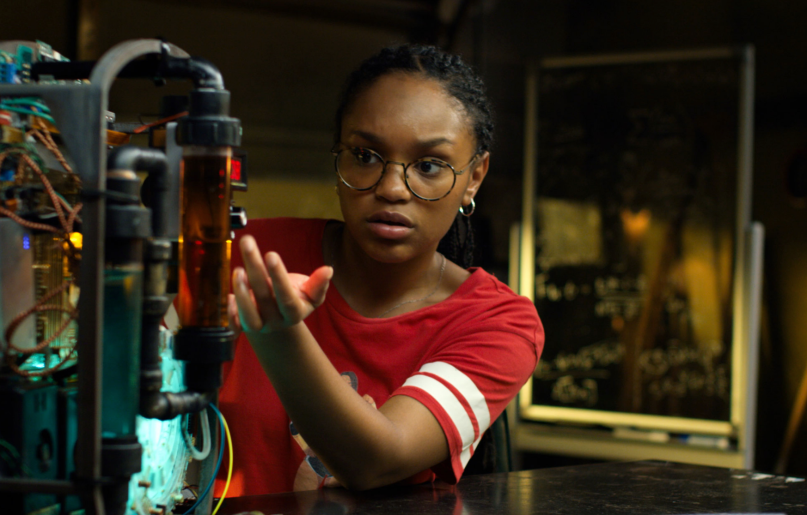 The idea that we can go back in time and fix a dark shade in our history is sadly poetic; the statistics do not lie; this should not be happening at the hands of police officers at all. There’s a certain irony in See You Yesterday that will dawn on you eventually way after the movie is finished, but the collective idea you will take away is that feeling of inevitability; you can make a cool story surrounding two teenagers in a neighborhood trying to push the doors of MIT, but gun violence mixed with racial discrimination statistically goes against their odds.

It’s easy to read into See You Yesterday; remove the influence of the themes, and you have an engageable time travel story with the purpose of amending the timeline to save a loved one. At that level, the Netflix exclusive is a midpoint film designed to entertain. You could also argue that the themes are delivered to an acceptable and straightforward level, but the counter-argument is that See You Yesterday is not designed to be deeper than it is. It wants to serve the sci-fi genre as much as highlighting the problems for young black teenagers in America today, and it’s difficult to pinpoint whether it achieved that balance to be a great film.

See You Yesterday is enjoyable enough to sit through for 90 minutes without feeling the need to eye your phone, but you almost feel like the Netflix film wanted to scream for more.