Annabelle Comes Home is the seventh installment in the Conjuring Universe, and the third outing of the Annabelle doll too. Did this one scare up a treat or did it go down the pan as many franchises do? Read the full review on Ready Steady Cut here.

There will be major spoilers for the movie involved in the ups & downs, this is your warning.

Judy Warren is the 10-year-old daughter of the famous paranormal couple. We have had mentions of her and small moments with her, but we have never truly focused on her. Where Annabelle Comes Home shines is seeing how the profession of Judy’s parents has seen her getting treated differently by her classmates, bullied and shunned, leaving her isolated at a time she needs to have friends the most. This does deserve praise because we focus so heavily on the Warren’s investigations, they do make headlines and do have people questioning them, while others become scared by them, leaving poor Judy coming off as a victim of their success.

Daniela is the babysitter’s best friend. She has become fascinated with the idea of her working in the Warren’s house, wanting to know if the stories are true. While she does get given a strong motive for doing what she does, she wants to connect with her deceased father once again after his death in a car accident where she was driving. This is completely understandable, however she does do plenty of sneaking around the house just looking for the cases, with the way she acts being one of the main reasons why Judy is willing to fill in a couple of blanks, pushing the innocent 10-year-old to give away secrets. She is filled with bad decisions through her own reasons for searching for answers, which will see you shaking your head at her for large parts of the film.

Up 2: The New Demons

Annabelle isn’t the only evil spirit we meet in Annabelle Comes Home. By going into the artefact room, we are introduced to a host of new spirits: The Ferryman, Oni The Samurai, a Werewolf creature from England, and the Bride, just to mention a few. If we are honest, this movie could be a feature-length trailer for the Conjuring Universe, trying to see what the fans are talking about the most to help greenlight the next couple of pictures from the universe, because honestly we could have endless amounts of movies, with the artefacts from the room. We only get a couple of snippets of these new demons without giving away everything about them, which a new movie can do for us all. 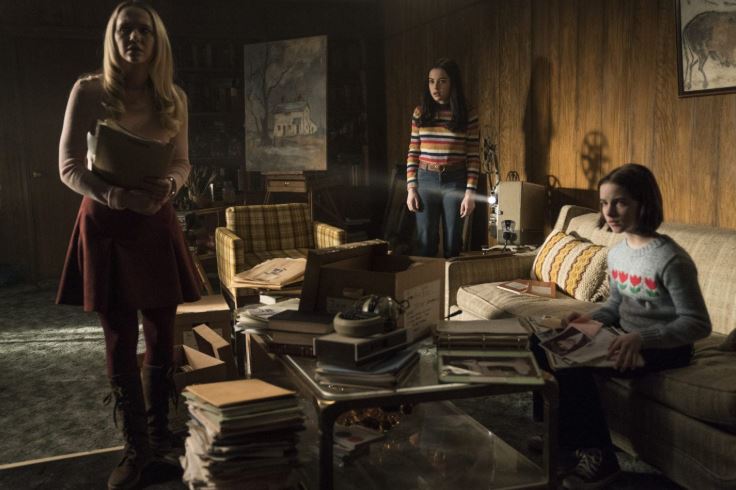 Annabelle Comes Home is heavily advertised on the return of Ed and Lorraine; the truth is we get an opening sequence with them returning the Annabelle doll that shows its power, and after that, they are away. This is very misleading which will disappoint fans of the franchise, even though luckily the three leading ladies are flawless with their performances.

Up 3: The Jump Scares

Annabelle Comes Home uses plenty of jump scares. The positive with this comes with the fact they do feel relentless, because once one happens we move to the next character who is going through her own traumatic event. This does give different ideas for every spirit, with The Ferryman and his coin eyes being the highlight of them all. We might know how they are going to unfold with the music almost being sucked out of scenes before the horror is left to jump out, but we don’t get false scares either which is a big plus. If you can see one coming, it will hit you, even if we do borrow one of the best moments from The Nun, with the circular scare.

Down 3: The Babysitting rules

Annabelle Comes Home does focus on a babysitter staying in the home of the Warren’s with their daughter. Now, with the amount of evil that is in the house, surely there would be a rule: anything strange happens, leave until we get home; don’t investigate, just get out, especially with the idea that Judy has been having visions too, you feel they must have plans in place just in case something happens. We do go heavy on the no boys rules, which Mary Ellen is adamant to follow, but protecting their 10-year-old daughter is nowhere to be seen.

What are your ups and downs from Annabelle Comes Home?