Home » TV » TV Recaps » Fear the Walking Dead Recap: If This Show Kills Off The Only Good Thing About It I Really Just Can’t Even

Fear the Walking Dead Recap: If This Show Kills Off The Only Good Thing About It I Really Just Can’t Even

“Still Standing” proves that no matter how stupid and contrived things get, this show still shambles along.

“Still Standing” proves that no matter how stupid and contrived things get, this show still shambles along.

This recap of Fear the Walking Dead Season 5, Episode 7, “Still Standing”, contains spoilers. You can check out our thoughts on the previous episode by clicking these words.

If you were lucky enough to have forgotten the various bizarre happenings of last week’s episode, allow me to give you a brief rundown of how we find things in Fear the Walking Dead Season 5, Episode 7, “Still Standing”. This show is indeed still standing, in the manner of a drunkard in an abandoned doorway, and at this point, the only joy to be gleaned from watching it is in predicting how much stupider it might get before it ends.

That’s if it can get any stupider — the jury’s still out. Nevertheless, we rejoin our dopey do-gooding Scooby gang in various degrees of peril, with Strand and Charlie, free from their beer bottle hot air balloon, besieged on all sides by zombies; Morgan and Grace braving the irradiated wastes in search of… well, something, I’m still not sure what; and Alicia battling her way through hordes of the undead to save children who have made it explicitly clear that they don’t actually want to be saved.

You could throw a dart anywhere in “Still Standing” and skewer a bad idea. Everything’s happening just because something has to be, and characters will behave in whatever manner the script requires them to in order to facilitate the next action set-piece or contrived plot development. Continuing the show’s faintly embarrassing theme of Alicia being a kind of fabled warrior goddess, Fear the Walking Dead Season 5, Episode 7 has her virtually beg the children to let her fight on their behalf, engaging the dead on a rickety bridge with wild abandon until her mouth is filled with potentially irradiated blood. The big question to be asked before next week’s mid-season finale is whether this show is braindead enough to kill the only interesting thing about it. 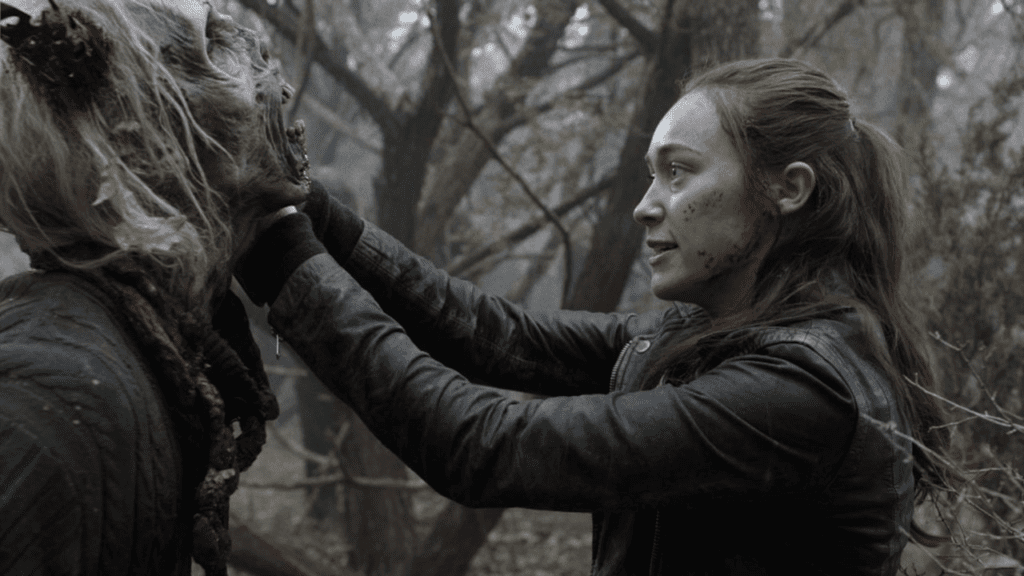 And there’s no argument that Alicia remains the show’s best component, even if she has been rewritten as a vacuous mouthpiece for Morgan’s extraordinarily tedious self-loathing morality. In “Still Standing” he repeatedly ignores Grace’s advice, and turns up in a radiation suit to save the day; he might rescue Strand and Charlie from their doom, but only because they were thoughtlessly stuck waiting for him to do so. Fear the Walking Dead Season 5, Episode 7 is so embarrassingly transparent in its efforts to create tension that all its dilemmas are closer to insulting than exciting.

And that’s to say nothing of how thoughtlessly “Still Standing” churns through potentially interesting dynamics and developments. Althea and June, on the hunt for aviation fuel, have a heart-to-heart about love and relationships that amounts to virtually nothing, given so little screentime that I if I hadn’t noted down its existence I’d never have remembered. And Dwight and John’s relationship skips over a roadblock so smoothly the entire subplot regarding Dwight’s missing missus was rendered almost completely invalid. Deciding to present Dwight the letter he lied about having found for no good reason whatsoever, you’d at least expect a bit of a falling out. But no such luck. The entire conflict is just resolved, more or less immediately, with nobody learning and nothing changing as a result.

Perhaps I will never learn or change either since I continue to watch and write about this show, naively hoping it’ll improve enough to be interesting despite it showing no signs of doing so — the definition of madness, I believe, repeating the same action expecting a different result. At this point, the chances of Fear the Walking Dead becoming anything other than a mundane, contrived slog through well-worn terrain are very slim; maybe next week it’ll at least commit to being bad enough to hate, just so I can summon the energy to care what happens.