As I did for the last couple of years, I’m watching a horror film for the first time for each of the hundred days leading up to Halloween. I’m filling in gaps in the “classic” and well-known horror that I’ve not seen, and mixing up cinema, streamed films, DVDs and film festivals; looking out for female filmmakers where possible and a wide range of cultural backgrounds. Variety is my thing! Let #100DaysOfHorror 2019 begin. 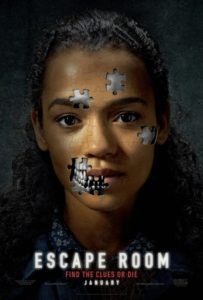 I’ve seen films before in which people had to work together to get out of a fix, and films with puzzles to be solved to stay alive… Escape Room was a bit like a blend between Saw and Cube, but not terribly gruesome: entry-level horror, rather than beginner torture p**n. It was pretty entertaining, even though it was easy to work out from the start who was going to win the “game” and why it was so tough: essentially, the general set-up was not original, but the details were. 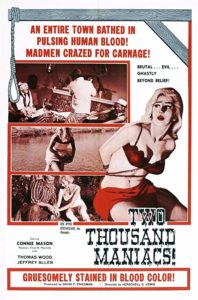 Maniacs is about some wholesome young city people who are lured into a little country town in the deep South where the residents are celebrating a centennial, not realizing there is a deep prejudice to be unleashed on them.

I’d not seen anything by Lewis before, and found Two Thousand Maniacs! to be both surprisingly joyful and surprisingly shocking: something about its style felt like a blend of Russ Meyer and Troma! I enjoyed it a great deal, though some of the violence and carnival set pieces were so well done that I could almost feel them, and got a little queasy at times (especially — in case you’ve seen it — the barrel roll). 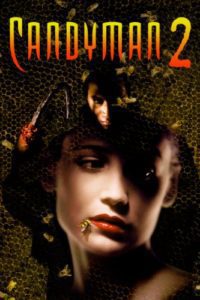 Candyman 2: Farewell to the Flesh (1995, USA/UK), written by Rand Ravich and Mark Kruger, from the story by Clive Barker, directed by Bill Condon

I saw — and loved — Candyman years ago, but never felt any inclination to watch the sequel until it was mentioned in Horror Noire. And they were right: the added back story that a second film allows gave the bad guy some depth, and indeed sympathy; almost a tragic anti-hero. Candyman 2: Farewell to the Flesh may not be a scary or thrilling horror film, but like many Clive Barker stories, it is moody, visceral and has a sense of history or inevitability: those who brought about Daniel Robitaille’s death did so because of prejudice and shame, and it was shame that kept his lineage secret. 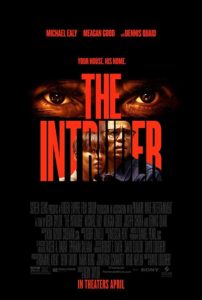 IMDB classified The Intruder as horror, but having seen it at the cinema, I’m not so sure; another “entry-level” horror/thriller at best. With some better writing and direction, the claustrophobia and home invasion elements of the story could have been as tense as When a Stranger Calls, or The Strangers. Instead, it was diverting escapism in the style of eighties/nineties thrillers about a nice couple or family vs. a weirdo. Oh well.

Again, Marc reviewed The Intruder in full earlier this year… but I think, by and large, we agreed. 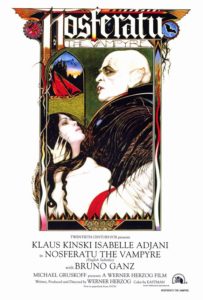 Nosferatu the Vampyre is strikingly beautiful at times and had my gooseflesh tingling almost constantly. It’s not just attention to visual detail and period style which makes it, but the use of sound and music — sometimes quiet, sometimes epic — which might seem a little cliched or overdone now, but is deeply effective. I must say I didn’t expect this, but I couldn’t take my eyes off the screen for the whole of this film: it’s absolutely captivating.

The cast is also worth a mention: Klaus Kinski’s Count Dracula comes across both lonely and toxic; while Isabelle Adjani’s Lucy Harker is the perfect damsel victim. Most notable (to me) was Bruno Ganz, who plays Jonathan Harker with tender realism; he can be seen on Netflix in The Party, though sadly died earlier this year. 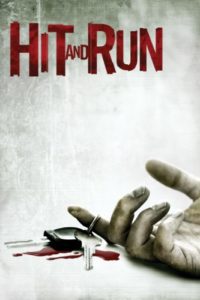 Don’t you just hate hangovers? Young Mary (Laura Breckenridge) wakes up after a heavy but joyful night out only to discover that it wasn’t an animal her car had collided with the night before, but a man… who is still stuck to her bumper, and barely alive. Things go from bad to worse for both Mary and said injured man (Kevin Corrigan), who is — just wait for the cliche — “off his meds” and thinking only of revenge.

Mary is very resourceful, and very little of the plot was actually predictable; simple, though it was. The production was excellent, with realistically gory and scary moments, as well as successfully balancing just enough light during a dark night. The cast was terrific, too; especially Breckenridge, who I felt I could sympathize with all the way, even if I didn’t quite go along with everything she did. Oh, and unusually, the ending caught me by surprise. If you can forgive the mental health exploitation, I’d recommend Hit and Run for some cheap pulp thrills. 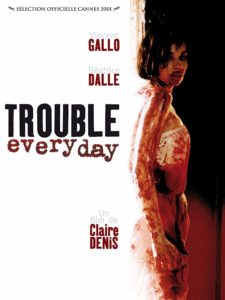 My first Claire Denis film (though not the one I was hoping to see this year, High Life not having made it to the local cinemas) is also the first film this season from a female director. In Trouble Every Day, Shane (Vincent Gallo) is honeymooning with his new wife in Paris, but he doesn’t mention to her that he has also come there to hunt down an old colleague and his wife. This search takes Shane obsessively farther away from his new bride; while at the same time, his colleague’s wife Coré (the remarkable Béatrice Dalle) is also suffering obsessions of her own.

It’s an incredible film, with restrained pace and unrestrained passion. Lust is portrayed as cannibalism in Trouble Every Day, but the sort that can take place in a familiar city, rather than the Hills Have Eyes type of cartoonish, over-the-top setting. Each of the three main castmembers was memorable: Gallo with self-control his character worked hard at, visible in his face; Tricia Vessey, who played his wife June, attracting our sympathy for the loneliness she felt so soon after marriage; and of course Dalle, who has only one line in the whole film, which seems to add to Coré’s feral nature.

I have great admiration for this film (sealed during a major death scene when the screaming just didn’t stop, as you might expect it to); though unfortunately, I found it just a little unexciting. 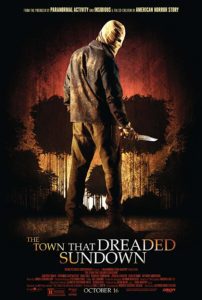 Now, this was impressive: not the story or the mood or the scares or the acting, but — unusually — the craftsmanship behind the structure of the film. The Town that Dreaded Sundown is not — as many would presume — (simply) a remake of the 1976 film of the same name, but it does revisit that earlier film: this newer one takes place in the same town, looking back on the same events (and of course with new killings going on), but this time the town looks back by watching the old film together, every year. A “survivor girl” from one of the latest killings tries to dig into the history and uncovers some inaccuracies in how the 1976 film presented events. The internal history within the film and the impact on the small town are remarkably well constructed.

As well as that, the film is beautifully made: the close-ups, the side angles on faces, the claustrophobia, paranoia and especially the very welcoming sense of place: The Town that Dreaded Sundown is almost like a perverse tourism piece. I really must hunt down the original sometime. 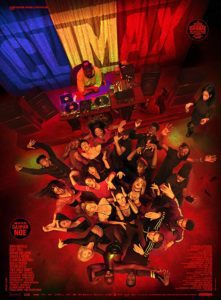 I think this is basically Noé’s “drugs are bad” film; but it is set to such energetic music and frenetic, almost-improvised dancing that it’s utterly engrossing. I loved it, and have no doubt I’ll watch it again. As soon as Climax had finished, I bought the soundtrack.

Some have asked what the point of this film is, as the plot is so slight: it’s essentially about a group of dancers whose post-rehearsal party goes downhill when they find their sangria has been spiked, presumably with LSD. As I see it, the point is about the fragility of people: any of us can change without warning. On the other hand, there’s also a lesson in how difficult it is to tell whether people were being fake when they were getting along fine (before the drugs hit).

I really want to know what happened to the little boy. 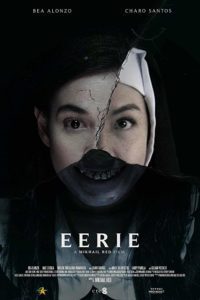 A counselor at a catholic girls’ school talks to the dead to find out why apparent suicides are on the increase there. Yes, it is as melancholy as that sounds. Beautifully made, though, and with some very effective scares. A good deal of the story, characters and style are familiar from other films and TV shows of that region (especially Thirteen Terrors), but the characters particularly were well-drawn enough that I easily forgot about their influences as I watched.

Unfortunately, the film is a little too slow to hold my attention well throughout: it felt a lot longer than the hour and a half.

Check out the rest of my #100DaysOfHorror countdown, and feel free to contact me on Twitter if you have “must-see” suggestions for me.