Home » TV » Fear the Walking Dead Recap: Is There Any Way To Speed This Show Up?

Fear the Walking Dead Recap: Is There Any Way To Speed This Show Up?

“210 Words Per Minute” was another insipid, aimless and repetitive episode of a show that clearly has no idea where it’s going or what it wants to be.

“210 Words Per Minute” was another insipid, aimless and repetitive episode of a show that clearly has no idea where it’s going or what it wants to be.


This recap of Fear the Walking Dead Season 5, Episode 10, “210 Words Per Minute”, contains spoilers. You can check out our thoughts on the previous episode by clicking these words.

“210 Words Per Minute” has, thankfully, abandoned the ludicrous faux-documentary approach that the show adopted last week, which is the only positive thing that can be said about it. Other than that it was business as usual: Aimless, circular plotting, insipid banter, tortuously repetitive moral self-justification, and a clear sense that this show has absolutely no idea where it’s going or what it wants to be.

The hapless Scooby gang are on the trail of another needy victim in “210 Words Per Minute”, this one having taking shelter in a mall which is clearly intended to pay homage to classic genre fare. Morgan and Grace handle that while Dwight busies himself with a dry subplot in which he’s kidnapped by one of Logan’s goons and is forced to come to terms with whether or not he can be a better man. The silly conclusion to this is that Dwight turns the tables on his attacker, ultimately deciding to let him go so that he can be a better man, thus paying all this claptrap forwards somewhat. “We’re not doing careful, we’re doing right” is the woefully-written mantra of the episode, and at its every utterance my eyes rolled so hard that they almost popped out of my skull. 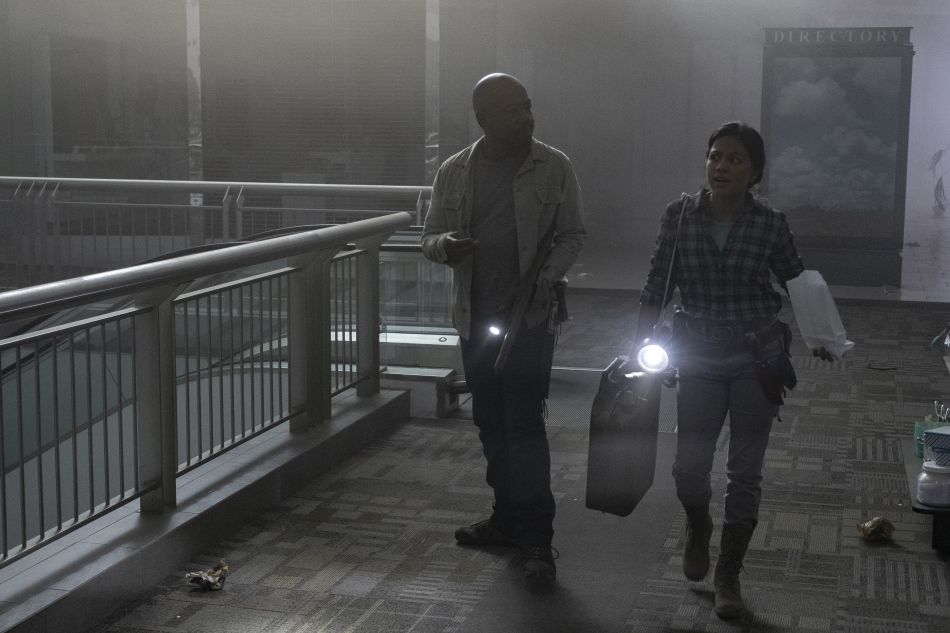 Amid notably unsuspenseful action beats in the mall, Morgan and Grace find plenty of time to debate life and death and the apocalypse — “210 Words Per Minute” is the speed at which Grace listens to her audiobooks so she can complete one in a single day; she’s scared of committing to anything longer, because what if the world isn’t there for long enough that she can finish it? This stuff is abysmal. It’s tedious faux-philosophical babble that exists only to repeatedly relay the moral underpinnings of the show’s new mystery-of-the-week persona, but it’s just badly written and oftentimes badly performed. The climax of this subplot, in which Morgan and Grace find their dying quarry, so blatantly yearns for sentimentality that it’s simply embarrassing.

In a sappy closing montage, Dwight gets a makeover, Grace turns her audiobooks to normal speed, and Morgan dopily grins. We’re supposed to believe that a turning point has been reached. But has it, really? The only thing changing from week to week at this point is the show finding slightly new ways in which to be terrible.