Lodge 49 Recap: The Secret of the Scrolls

“DisOrientation” made some headway on the show’s overarching alchemical story as several plot strands began to weave together in fun and surprising ways.

“DisOrientation” made some headway on the show’s overarching alchemical story as several plot strands began to weave together in fun and surprising ways.


This recap of Lodge 49 Season 2, Episode 3, “DisOrientation”, contains spoilers. You can check out our thoughts on the previous episode by clicking these words.

“DisOrientation” opens with an extended flashback to Ernie’s (Brent Jennings) adventures in Mexico with El Confidente (Cheech Marin), and given the history of Lodge 49, it’s easy to imagine that this is all going nowhere. The show picks up and abandons subplots on a whim, or uses them to make various abstract points about destiny and a sense of belonging and various other themes it likes. But not in this case. El Confidente returns at the end of “DisOrientation”, promising further excursions south of the border — and perhaps the secret to unlocking Bitcoin.

The Bitcoin thing was another surprise of “DisOrientation”, explained by Daphne (Mary Elizabeth Ellis) after confessing to Dud (Wyatt Russell) that she isn’t really going to sue a shark on his behalf. She actually works for Avery, from the first season, and she’s on the hunt for the enigmatic scrolls which she claims do contain an alchemical formula after all: The ability to make millions of dollars in cyber currency. 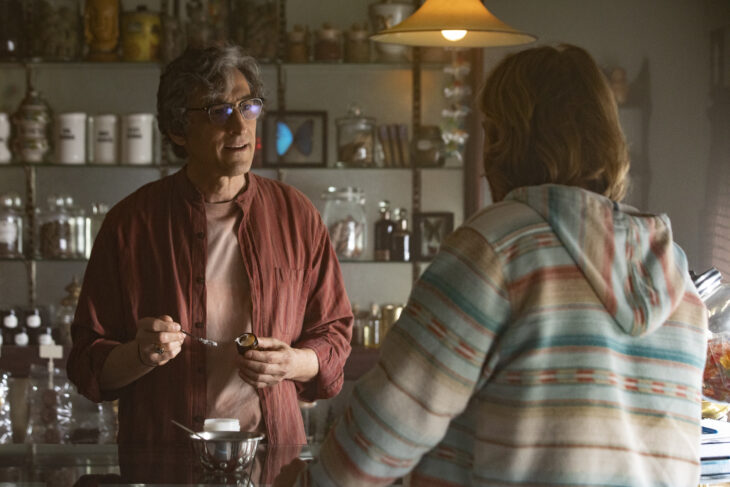 Dud has no clue either way; he’s just happy to have something to do. And the Lodge itself will presumably be happy to be involved in a big, potentially lucrative conspiracy, since Scott (Eric Allan Kramer) is clearly clueless about how best to rekindle morale and continues to butt heads with Jocelyn (Adam Godley), despite their burgeoning comedy bromance.

Liz (Sonya Cassidy) has a new job in “DisOrientation” — the episode’s title is taken from her wacky human-chess induction, conducted by a returning Tarquin (Vik Sahay), her manic old boss who is now her new boss as part of the upscale diner Higher Steaks, which has taken on most of the laid-off Shamroxx staff. It’s a way for Liz to feel as though she’s progressing in life without having to be too challenged, especially since her own rose-tinted recollections of her beloved father are beginning to be brought into question now that he might have had an affair with a nutcase water saleswoman.

And then there’s Connie (Linda Emond), who had a great scene in “DisOrientation” in which she opened up to Clara (Pollyanna McIntosh) about her fears and anxieties — perhaps now she’s ready for “the true Lodge”, which is a distinct possibility given that her blindfolded meetings with the Order’s higher-up turned out to actually be with Clara, putting on an accent. All the disparate strands of Lodge 49‘s plot seem to be weaving together now, giving this second season a better sense of cohesion without losing any of its oddball charm or knockabout comedy. “DisOrientation” featured a wonderfully funny send-off for Speedy (Milton Crane), who died at his desk. Ernie’s boss Bob (Brian Doyle-Murray) read a poem that was easily the most hilarious thing in an episode with lots of other funny stuff. As long as Lodge 49 keeps including moments like that, I’ll happily indulge as many trips to Mexico as it wants to take us on.