A back-slapping exercise in redundancy that will likely too more harm than good for those who are trying to get into comics.

A back-slapping exercise in redundancy that will likely too more harm than good for those who are trying to get into comics.

There are more covers for Marvel Comics #1000 than I could be bothered to look at. Seriously, there’s a pile of them. I got the retro one that looks like an old annual from the 1960s and it looks really nice. The 96-page special is a trip through the 80 years of Marvel — why they didn’t make this 100 pages I don’t know, but there it is.

The mastermind behind this special is Al Ewing, the genius behind Immortal Hulk, probably my favorite Marvel book just now, but there is something oddly off about this special issue that had me bored, confused and frustrated to the point where I had to put the darn thing down and take a break.

On top of the most obvious issues with Marvel Comics #1000, there’s a darker, more cynical story in the background that pretty much poisoned the whole well, but I will get to that later.

The book starts with a one page intro, showing us the reveal of the original Human Torch in 1939, then another one-page vignette set in 1940, where we learn of The Operative, then another single page featuring The Thunderer in 1940, then another single page from, no not 1941, but nine months ago with Jimmy Woo, monologing about the previously mentioned characters, then guess what, it’s 1943 and we meet Miss America, in another single page, then there’s a one-page splash of Captain America in 1944, holding a huge US flag and talking about his mask, or something, and so this issue goes. Right through the decades, spotlighting the debut or appearance of a comic from that year until we reach page 96 and there’s a reveal for a new character that will undoubtedly change the Marvel universe forever. The End.

Here’s my problem with the whole thing. 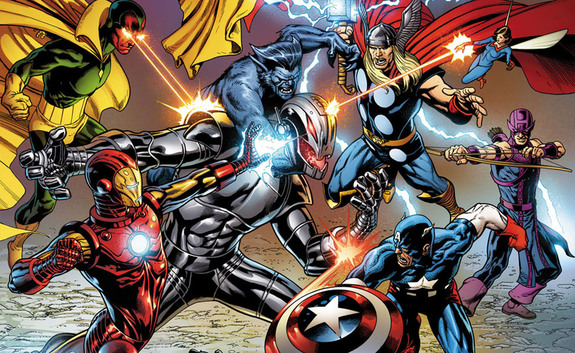 First of all, Marvel doesn’t have an issue of a title in publication that made it to 1000, so this whole premise annoyed me. DC had massive success with Action Comics #1000 and Detective Comics #1000, and quite right too. Those magazines earned the right to be there, and fans were given solid double-sized issues that fitted into the continuity of the titles. This book is just a mean attempt at grabbing that market. They should really have just done a special issue of Marvel Tales or Marvel Presents, at least that would have made sense, but issue #1000? Nah.

The stories themselves are all pretty much redundant too. The one-page format is too tight to convey any real emotion or feeling of celebration. The ideas, for the most part, are trite and often pointless. It’s nice to know that Patsy Walker Hellcat got her own title in 1945, but a badly drawn splash page of her fighting an alien tree is just lazy and banal. Pages like this are strewn through this book, telling us nothing about the character or what their part in Marvel actually is. Doctor Strange gets a page of him putting his costume in a launderette then sitting naked reading while his wash commences, but that’s ok as we get a blurb telling us Strange Tales premiered in 1951. No homage to Ditko anywhere, in a celebration of Marvel. Unforgivable. We get The Thing being interviewed for a page in honor of Fantastic Four #1 arriving in 1961, probably one of the most important comics ever published, and we get a jokey badly drawn and written piece that looks like it was made in someone’s lunch hour. I could go on.

You might remember me mentioning the Captain America page earlier, well it appears that the text, written by Mark Waid, was pulled and replaced due to offensive comments made about not Marvel, not Captain America, but the United States of America itself. Yes, in a Marvel comic celebrating its longevity, a writer decided that a political statement about how “deeply flawed” the country is is somehow at home in a Marvel comic that also features a woman dressed as a cat fighting a tree. The Hollywood Reporter reports that the original essay also featured Waid advocating taking to the streets in revolt, “When enough of us take to the streets and force those in power to listen.” Thankfully someone at Marvel decided not to print Waid’s call to arms because THIS IS A COMIC BOOK.

There was a chance here to give fans something special for Marvel’s 80th year, but unfortunately, Marvel Comics #1000 is a clumsy cash grab, filled with uninteresting non-stories that infuriate rather than celebrate. I cannot imagine giving this book to any of my friends as a route into getting them to buy comics, and that’s a shame. This could have been an opportunity to present the best of Marvel comics, and to entice new readership to go every week to their LCS and start reading, but instead, we get a back-slapping exercise in redundancy and petty opinion that will do more harm than good. On the plus side there are some good covers here, throw your 10 bucks away on the one you like most.