These are our DC Previews for November 2019. You can still check out our previous round-up for releases in October by clicking these words.

Well, the big thing happening at DC this November is the relaunch of Legion Of Superheroes by Brian Bendis and Ryan Sook. DC are all in on the return to the 31st century super team, that starts with “a mystery woman living in the DC Universe today, who discovers that she is not aging. We follow her as she walks through all of DC’s futures, right up to Legion of Super-Heroes’ front door.” Excited yet?

If not, don’t despair, there are a couple of interesting releases, including a Batman: White Knight spin-off by Sean Murphy and Klaus Janson that focuses on Victor Fries. Look for Von Freeze, a one-shot that expands Murphy’s Batman universe. There are a couple more “Tales from the Dark Universe” titles: Blackest Night #1 and Infinite Crisis #1, retelling events from continuity but with darker edges. 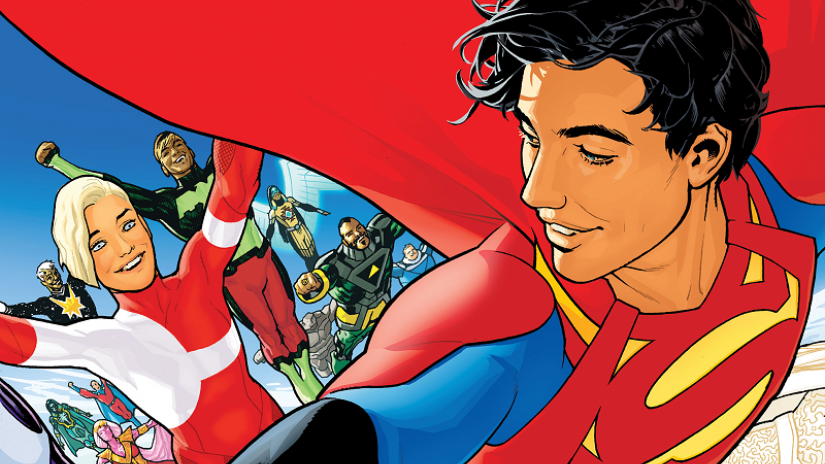 DC Previews for November 2019: The Dollhouse Family and Other Miniseries’

DC has a few mini-series’ launching this November, but the most intriguing may be 6-issue series on the Black Label imprint titled The Dollhouse Family. It’s from the Joe Hill stable of stories, written by Mike Carey and looks very creepy. Creepy, in a different way, is the 12 issue maxi-series Far Sector starring a new female rookie Green Lantern. A 7 issue sci-fi titled gen:Lock that spins out of animated show Rooster Teeth, and Grant Morrison gives a 3-issue mini series Blackstars that follows on from the catastrophic events in GL #12. He-Man, yes him, gets a 6-issue story by Tim Seeley and The Question gets his own 4-issue run, “The Deaths Of Vic Sage” by Jeff Lemire.

In the ongoings, look for Batman #83, and we are in Part 9 of “City Of Bane”, and it’s time for a reckoning in Gotham… oh sorry, drifted off there. More Batman stuff from Neal Adams with issue #4 of Ra’s Al Ghul, and an afternoon tea party, meanwhile Batman: Last Knight on Earth reaches its final 3rd issue, The Batman’s Grave by Warren Ellis and Bryan Hitch continues the mystery from issue #1, Detective Comics hits #1016 with more Mr. Freeze action, and Mrs. Freeze too, and Harleen concludes with a 3rd issue by Stjepan Sejic. Flash is at issue #83 and “Rogues Reign” continues, Justice League #36 ramps things up for the Justice/Doom war, Steve Orlando’s Wonder Woman #83 continues the fight against the Cheetah, but the latest release on the Sandman Universe imprint is John Constantine: Hellblazer #1, reintroducing John, the original John, back into the darker corners of DC. Please, let it be good, let it be good.

Event Leviathan reaches its conclusion with issue #6, and DC’s other miniseries’ include Flash Forward #3 of 6, Freedom Fighters #11 of 12, Gotham City Monsters #3 of 6, Inferior Five #3 of 12 and Joker Harley Quinn book Criminal Sanity #2 of 9. Lois Lane and Jimmy Olsen’s maxi runs hit issue #5, Metal Men #2 of 12 is by Dan Didio, yes the man himself, and horror fans should be enjoying issue two of previous Joe Hill vehicle Basketful of Heads. Reprint titles Batman Universe and Superman Up In The Sky are at #5 of 6, Titans Burning Rage is at it’s 4th issue and Wonder Woman Come Back To Me is at issue #5, all originally presented in those books you could only buy in Walmart.

DC seems to be really watching their output carefully these days; they certainly have cut back on the number of titles they are releasing. There are lots of mini-series’ but reading between the lines, I think there may be a lot more happening in DC behind the scenes than we can ever know.

My hard-earned money will go to the new Constantine book, Blackstars #1 and possibly the Legion reboot, just for old times’ sake.