Spider-Man: Life Story #6 Review: A Brilliant Ending to the Miniseries

Spider-Man: Life Story #6 is a solid superhero story that gives readers exactly what they are looking for in a Spider-Man book.

Spider-Man: Life Story #6 is a solid superhero story that gives readers exactly what they are looking for in a Spider-Man book.

Spider-Man: Life Story was a great idea, but often the best ideas remain just that, with no follow-through or real progression. However, this mini-series by Chip Zdarsky and Mark Bagley started well and just improved. If you were late to the party, the premise was simple: what if Peter Parker aged in line with the publication of the comics? So in 1962, he was 15 when bitten by the spider, and by Spider-Man: Life Story #6, we are in the 2010s and Peter is in his 70’s.

We find Peter and Miles Morales on a mission to space, to an old space lab of Tony Stark’s to shut down Doctor Doom’s tech on a global scale. Everything should be going to plan, until Venom, in tow with a classic Spidey villain shows up, and that’s just the start of the problems.

To tell any more would spoil Spider-Man: Life Story #6, and it should be said that the ending of this story is one of the most satisfying that you will ever read. There is a great reveal that seems obvious but still surprises, and there’s also a kind of “post-credit” sequence that will bring a tear to the eye of even the most hardened Spidey fan. Yes, you may have seen it done other ways, but the premise of this book seems to make this ending even more special, and if it was the last Spider-Man story ever told, it would be the best of all endings. 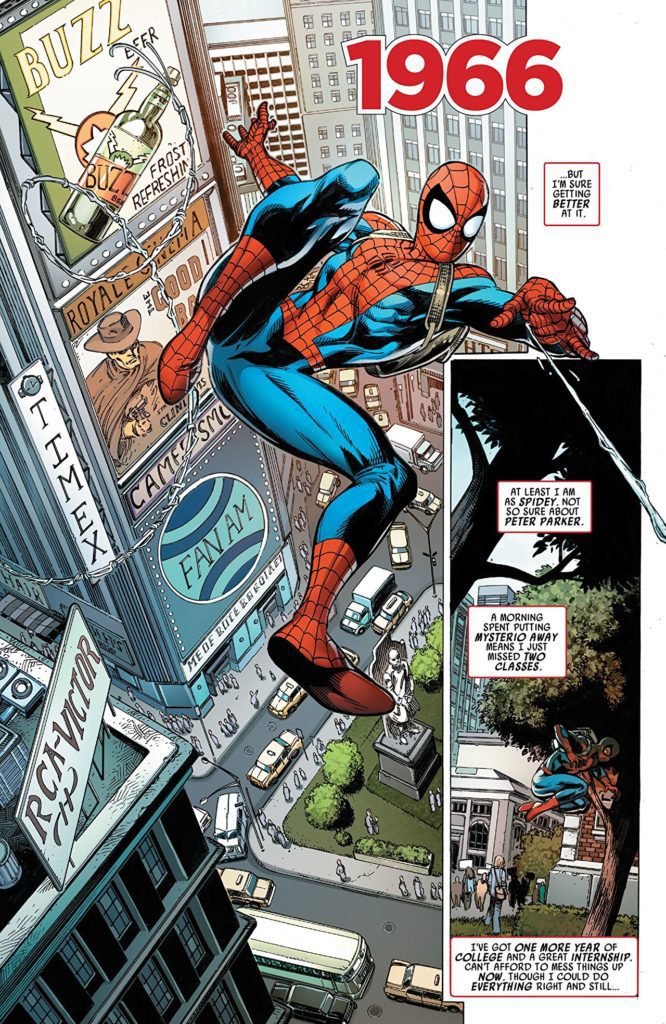 Art-wise, it’s hard to diss Bagley. His style may not seem as crisp as his work on Ultimate Spider-Man, but it is undeniable that you are looking at the work of a true comic book artist. His Spider poses and action sequences hark back to the lines of Ditko, and his characters look like Romita Snr.

Spider-Man: Life Story #6 is paced well, is exciting, includes some awesome action sequences, and Zdarsky knows exactly where the story is going with careful plotting and great characterization. This is a book that should be given to anyone interested in creating comics as a benchmark. This is what Marvel comics should look and sound like. Characters that are true to themselves, in situations that show what heroes do.

Too bad this is a mini-series, I could read Zdarsky’s 2019 Spider-Man all day.