It: Chapter Two carries the same pitfalls as its predecessor, and then some.

It: Chapter Two carries the same pitfalls as its predecessor, and then some.

It: Chapter Two is 2 hours and 45 minutes long. While that certainly may seem excessive on the outset, let’s not forget the ‘90s TV miniseries adaptation (whose infamous DVD box art scarred children such as myself for life) also carried a considerable length of just over 3 hours, and of course the fact that Stephen King’s gargantuan source novel sports well over 1,000 pages. The story of It is historically one that takes time to tell and to see that the sequel to Andy Muschietti’s 2017 revamp of the material (again directed by Muschietti) was tackling the intimidating length head-on was honestly exciting.

It’s not like that first film was particularly short either. Clocking in at 2hrs and 15 minutes, that film spent ample time attempting to develop King’s staggering work for the big screen and, perhaps unsurprisingly, fell somewhat short. It could never seem to really land on what it wanted to be, developing too much of the 80s-kids-in-the-summer nostalgia and also too much of the haunted-house-horror-show components simultaneously, making for a lackluster version of each type of movie. Too cutesy and funny to be scary, but somehow also too focused on spooks to truly develop the squad of Losers past basic character relationships and archetypes.

It: Chapter Two is interesting in that it has all the same pitfalls as the first movie, plus some. Scenes of tension are deflated by bad jokes, the movie is cluttered and unfocused, and this one, too, can never truly decide what movie it wants to be. However, at least the first film had the benefit of being genuinely entertaining in the moment, if not particularly memorable once the credits rolled. It Chapter Two is an unfortunate slog all the way through the entire 160-minute runtime; you truly feel the length.

The plot, of course, revolves around the gang of Losers who are called to come together in Derry, Maine once again after 27 years, as It begins to show its ugly face once more. Their memories foggy, they hardly have any recollection of what happened that summer, and once they start to remember they only wish they could forget again. The story eventually calls for them to split up to look for artifacts for a ritual that will hopefully relinquish the ancient power of It for good. This story framework ultimately means cutting between all the different members of the Losers as they wander around their old town and, wouldn’t you know it, fall victim to the tricks of their old pal Pennywise. 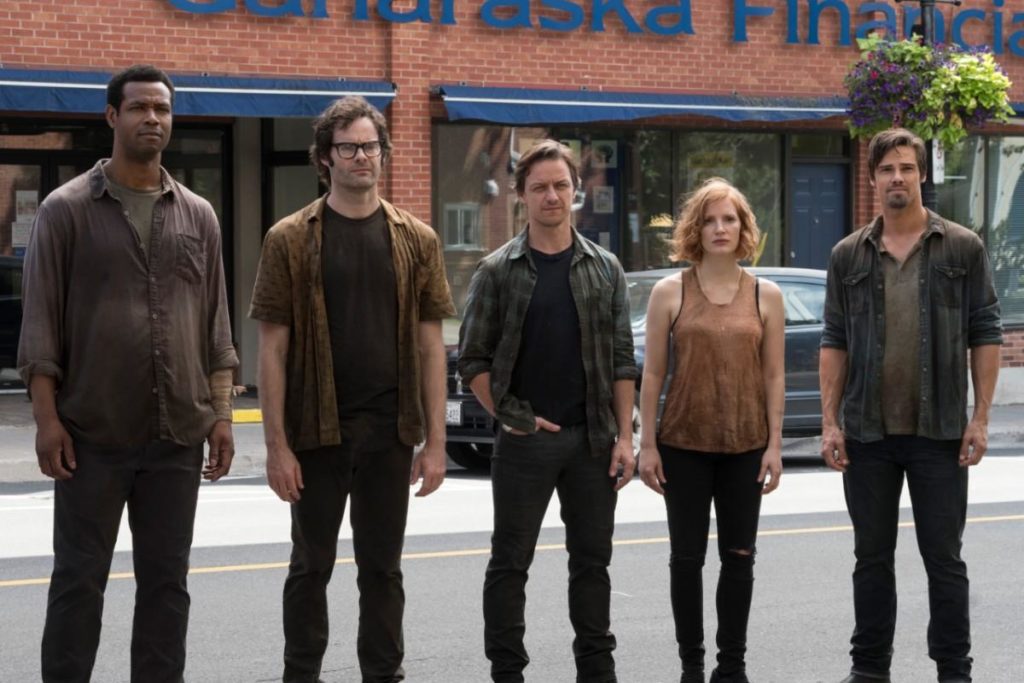 It’s all incredibly repetitive to watch unfold. The film just feels lost quite frankly, forced to flounder around to fill up the expansive runtime with scene after scene of spooky vision! Spooky flashback (with some notably distracting de-aging work done on the kids)! Character exposition! None of it ever feels like it truly comes together into something cohesive, it’s all a jumbled mess looking for some direction. It never aims to take advantage of the story’s subtext about generational trauma, historic evil, and coming together in unity with those you share a communal bond with to defeat that evil at the root of the life of pain these characters endure. There’s nothing past the surface. This is why scenes like a gay couple getting beaten comes off as exploitative rather than indictive of the evil of Derry. It’s why the implications of Beverly ending up with an abusive husband presumably because she had an abusive father come off as a little weird. It’s why it’s extremely apparent that the movie really doesn’t have too much for it’s only black character to contribute other than plot setup and exposition.

Instead, the movie is content to ride the wave of broad-spook-show horror, which admittedly works in spurts, though nothing here is as memorable as some of the macabre imagery in the first film. There’s some suitably bizarre stuff in here, but it all just feels…tedious, particularly during the first two thirds (not to mention the first teaser trailer completely gave away what is probably the best single sequence in the whole film). The haunted-house-ride approach is finally able to coalesce into something somewhat striking in a climax that is genuinely thrilling and fun, even if it’s mostly too little too late. Rooms that collapse into each other, a giant Pennywise, a cute little dog that turns into a big scary demon dog, it’s all here. It’s also the only time in the movie these characters really feel unified.

This was my biggest surprise walking out of the film. I thought It: Chapter Two would at least get the adult versions of these characters right, but every one of them, save perhaps for McAvoy and Hader, feel starkly disconnected from their child counterparts. These don’t feel like the same people that banded together to fight off their fears in the first film, and this group of actors doesn’t have anywhere near the level of chemistry as the kids did. Everyone brings a sufficient performance for what the film calls for, but the writing never makes them feel as connected as the younger cast felt. This just gave me the sense of a group of talented actors coming together to try to work through a bumpy screenplay as best they could.

Bill Skarsgård still brings a wonderfully theatrical performance of Pennywise, but even he isn’t seen much until the end of the film. This is because the movie wants to be a drama that puts its characters at the forefront and wrestles with their relationships with each other and with their past, but those elements feel so half-baked that nothing carries any weight. It: Chapter Two is a film that fails to capitalize on its thematic potential because of its disjointed characters and lack of depth past surface scares and broad, agreeable character arcs. I carry appreciation for any mainstream horror release that goes for broke as much as this one does in select moments, but it doesn’t go for much more.