Home » Film » Film Reviews » Parasite Review: You’ve Never Seen Anything Quite Like it

Parasite Review: You’ve Never Seen Anything Quite Like it

Here is a dark-comedy from the great Bong Joon-ho about class warfare that, depending on your mood, you may find to be a work of genius or too self-indulgent. One thing is certain, you’ve never seen anything quite like it.

Here is a dark-comedy from the great Bong Joon-ho about class warfare that, depending on your mood, you may find to be a work of genius or too self-indulgent. One thing is certain, you’ve never seen anything quite like it.

Bong Joon-ho has never shied away from films about social classism; in fact, he revels in it. He wants to explore human society and how someone can take the shoots and ladders approach to move up and down, not just its structure, but how someone can function within a level they aren’t accustomed to. What else would you expect from a man who grew up in a highly intellectual family (his grandfather, Park Tae Won, is a noted author who wrote A Day in the Life of Novelist Gubo, his father is a graphic designer, and his siblings range from fashion designers to professors) and graduated with a degree in sociology? A director who, by all accounts, seems to be an expert on the human condition; someone who can tell you exactly what will happen when you trap two men together in a small room and the one who will be the one to eventually walk out. His latest, Parasite, is a real game-changer, a dark-comedy on class warfare, that probably would have been labeled as one of the year’s most unpredictable (that honor still goes to Dragged Across Concrete) if the film’s poster didn’t give away as much as it does.

Song Kang-ho, a Joon-ho key player who has starred in The Host, Snowpiercer, and Memories of a Murderer, plays Ki-taek, the head of the Kim clan. They are currently living in a basement-dwelling apartment, complete without Wifi, a toilet that’s literally on a throne, and they leave the windows open to allow free extermination from the city bug sprayers. His son, Ki-woo (Okja‘s Choi-woo Shik), is handed a gig for some easy money tutoring a teenager for the wealthy Park family. Soon, he sees an opportunity that takes advantage of Yeon-kyo (played by Cho Yeo-jeong) a neurotic housewife who is worried about her son who, she says, saw a ghost on his first birthday almost a year before. This sets a plan in motion to slowly take over the household jobs for the rest of Ki-woo’s family. 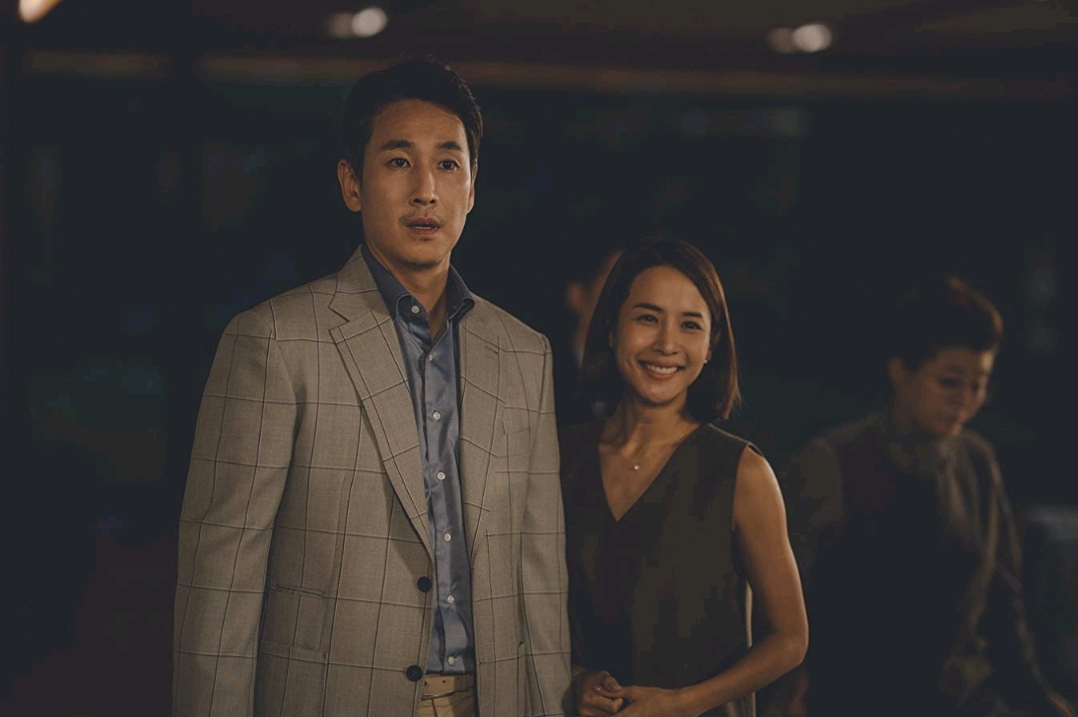 What makes Parasite so effective is the way the script combines a mix of genres, going from its heist like set-up, then dark comedy, thriller, and elements of horror (but not as much as you would think). This, of course, comes along with sharp shifts in tone, and while the set-up is straight forward and basically predictable, this script has plenty of surprises along the way. What makes the film script truly sing is not just stand-alone performances, but the way the interactions play off between character pairs. Song Kang-ho, who always carries a sense of gravitas in almost any role he takes on, downplays his presence to give you a feel of the extreme difference between Lee-Sun Kye’s yuppy businessman Park Dong-ik. Jang Hye-jin is very good here, as the puppeteer who, like a referee in wrestling, guides her prey or kin, in and out of harm’s way for their benefit, with possible impending consequences. Park So-dam (The Priests) is also worth mentioning, as she offers, really, the main constant stream of comic relief.

In the end, some might find Parasite to be uneven, and no other director may be subject to his films being judged based on what type of mood his audience is in, purely based on his filmography or, more accurately, this film’s eclectic feel. The result could be a polarizing one for some, while many could find it work of pure genius or others may subjectively conclude it is too self-indulgent (anyone looking for Snowpiercer here will be disappointed because, as unconventional as that film is, it’s much more a mainstream studio film than Bong Joon-ho has ever done). All I can say is that I’m certain I haven’t seen anything quite like it, maybe never again, at least until his next picture comes out or someone knocks it off.