“Today and Tomorrow” was another aimless episode full of banality and stupidity in a show that evidently has no idea where it’s going.

“Today and Tomorrow” was another aimless episode full of banality and stupidity in a show that evidently has no idea where it’s going.


This recap of Fear the Walking Dead Season 5, Episode 14, “Today and Tomorrow”, contains spoilers. You can check out our thoughts on the previous episode by clicking these words.

Another episode neatly divided into two parallel storylines, “Today and Tomorrow” splits its focus between Morgan (Lennie James) and Al (Maggie Grace), who’re depositing help boxes and setting up outposts, and Grace (Karen David) and Daniel (Rubén Blades), who’re attempting to drag supplies back to the convoy. Neither storyline is as simple as it sounds, and neither is very good, eventually coming together for a cheap “emotional” ticking-clock that’ll presumably loom over next week’s episode.

Morgan and Al’s shenanigans in “Today and Tomorrow” are perhaps the more tedious, but Daniel and Grace’s are stupider; it’s a tight race in both categories, mind. But the reintroduction of Althea’s nutcase chronicling of every apocalyptic event she encounters makes a return, as does the filtered playback of her recordings complete with obvious stopping, rewinding, and fast-forwarding sound effects, and Morgan’s remarkably tedious monologuing. He wants to stay on the road dropping cardboard boxes everywhere despite their lack of fuel, and Al wants to get to the bottom of what personal anxieties are preventing him from returning to the convoy. When they happen on a survivor, Tom, who is on the run from the cowboy settlers we met last week, it gives them a good excuse to put that on hold while they try and spring his missing sister from a luxury condo development.

In an on-camera interview, Tom explains the background of the condos, his accidental promotion to a leadership position, and the arrival of the settlers just as the place was beginning to spiral into ruin. Upon hearing the familiar pioneer rhetoric, Al presumes that the group who have taken over the development is the one her lost love Isabel (Sydney Lemmon) belongs to — you might remember her from this season’s only decent episode. But that was the three-ringed militia who kidnapped Rick Grimes (Andrew Lincoln) in the much-improved main show; the settlers here, led by Virginia (Colby Minifie), who we met last week, are a different, less organized bunch, who are impressed by their ability to make jam. If this is a disappointment to Al, I wish I could express how much of a disappointment it is to us. 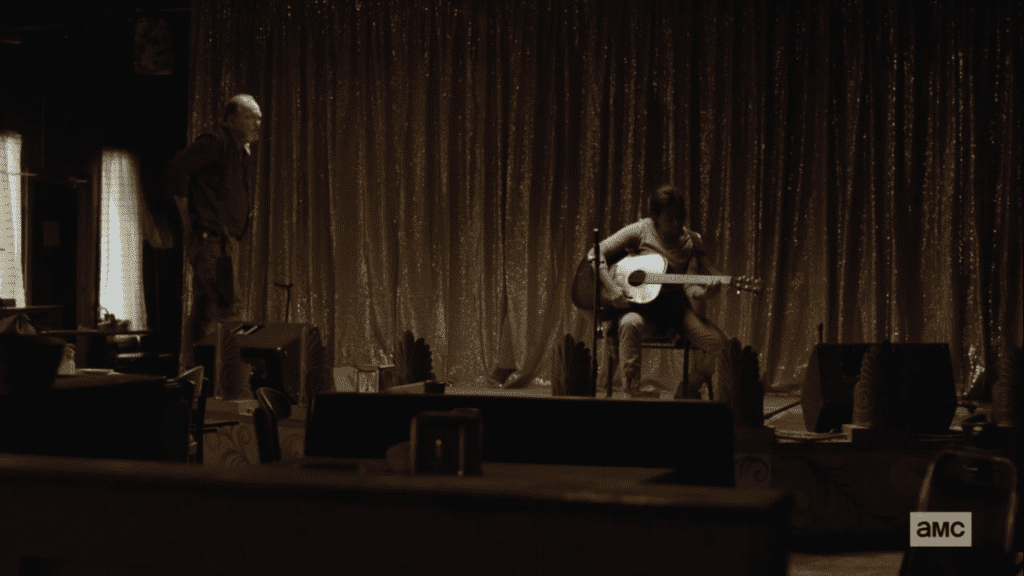 Nevertheless, a chunk of “Today and Tomorrow” is devoted to Morgan and Al breaking into the development, making a terrible mess of it, and finding themselves the temporary captives of Ginny and her horsemen, presumably so that she can once again explain her group’s ideology so we can really understand the exact way in which it clashes with that of our heroes. After a chat, they’re released without incident — the settlers even smarten up Morgan’s stick as a goodwill gesture. Slightly later, in another on-camera interview, Morgan explains how he told Ginny that she was holding onto the past — but she isn’t the only one. He says he doesn’t need to do this anymore, and radios Grace.

Daniel and Grace spend the entirety of “Today and Tomorrow” trying to return their various acquisitions to the convoy. Those acquisitions include solar panels and vinyl records, and they have pointed conversations about how much they need to prepare for the future versus how much they can conceivably carry — the subtext isn’t subtle, let’s put it that way. “Being a realist is not a realistic option anymore,” is the kind of line that might be considered quite pointed if it actually meant anything.

A particularly egregious moment this week is when Daniel and Grace are accosted by zombies and end up dropping most of their stuff, and Daniel pauses halfway through the fight to pick his vinyl up and almost dies. It’s difficult to overstate how utterly infuriating it is when hardened survivors struggle to fend off lowly walkers at this point; both Morgan and Al find themselves in similar situations, too, since apparently the show can’t go an hour without including at least one sequence of maximal stupidity. Daniel’s justification later on in “Today and Tomorrow” was that he was desperate to return the music to Charlie (Alexa Nisenson), who has fundamentally altered his perspective on the apocalypse. For some reason, and I swear this is true, Daniel and Grace find a guitar and a stage and sing a duet.

The stories collide when Morgan hollers at Grace on the radio to discover she has fallen deathly ill; her illness — is it cancer? I think it’s cancer — is rapidly developing. Will she survive for long enough for Morgan to confess his feelings? Do we care either way? These are the riveting questions that will keep us coming back!