“Hurricane” never quite comes together in the way it’s intended to thanks to a season of lackluster build-up, but you can see what the episode might have been.

“Hurricane” never quite comes together in the way it’s intended to thanks to a season of lackluster build-up, but you can see what the episode might have been.

This recap of Pandora Season 1, Episode 10, “Hurricane”, contains spoilers. You can check out our thoughts on the previous episode by clicking these words.

Pandora Episode 10, “Hurricane”, is intended to be the culmination of several on-going subplots and character threads; the payoff for weeks of worldbuilding, political maneuvering, and governmental skullduggery. But there’s a problem, which is that the CW’s Pandora has mostly been rubbish, so its worldbuilding is comprised entirely of thin tropes, its politics have mostly been used as on-the-nose faux-woke metaphors, and the conflict between national governments and self-serving private interests has consisted of deliberately enigmatic posturing. As such, “Hurricane” never really comes together in the way it was clearly intended to, which is a shame, if not exactly a surprise.

The inciting incident is Ralen (Ben Radcliffe) being arrested for the sabotage of the Tereshkova, and immediately put on a rigged trial — capital punishment has been eradicated for terrestrial crimes but remains intact for war atrocities, so he’s facing the death penalty if he’s found guilty. And he inevitably will be, despite Professor Osborn’s (Noah Huntley) claims that “Here on Earth, jurisprudence is scrupulously fair.” Ha! 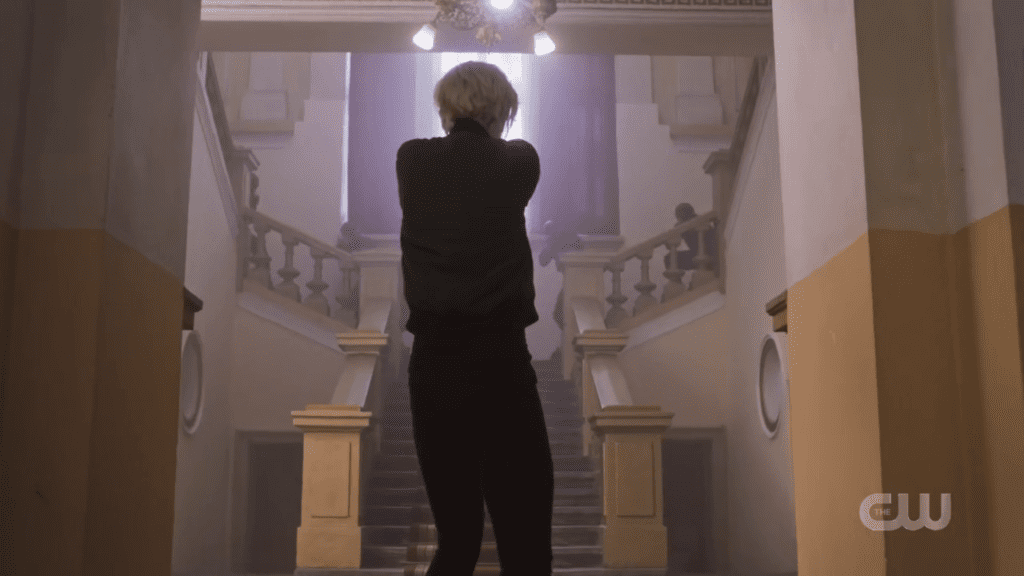 Ralen’s father and barrister wife, Matta (Amy McPherson), arrive in the capacity of official Zatarian representatives, The usual gang, meanwhile, fret over the usual stuff; Jax (Priscilla Quintana) thinks Ralen is being set up, Xander (Oliver Dench) doesn’t, despite having witnessed so much higher-up corruption at this point that it’s absolutely absurd he wouldn’t, and Atria Nine (Raechelle Banno) turns to Pilar (Banita Sandhu) for advice about her conflicted feelings for both Ralen and Thomas (Martin Bobb-Semple), who thankfully spends all of “Hurricane” slowly suffocating in space.

The damning evidence in Pandora Episode 10 is the flight recorder from the wreckage of the Tereshkova, recovered by Xander and Pilar earlier in the season, which clearly shows Ralen committing sabotage. But when we visit Harlan Fried (Ben Cross) having a mental sexist rant on IO, it quickly becomes clear that he’s in possession of the real footage, along with an alien sample which should have been destroyed in the crash. Since this will exonerate Ralen, when Cordelia (Isabelle Bonfrer) contacts Jax and offers to give her the evidence, Jax and Xander are on a shuttle to IO lickety-split. Ralen, meanwhile, is found guilty, leading his father to visit Professor Osborn and negotiate, handing over “Pandora’s Box” in the process. There’s also a strong intimation in this scene that Jax isn’t really Osborn’s niece, which would be perhaps the least surprising plot twist in history.

On IO, Jax and Xander retrieve the evidence, but Cordelia is “killed” during their pew-pew laser-fight escape. The evidence gets Ralen off, though his father reminds him to stay focused on his mission and not let his feelings for Pandora — “Her name is Jax!” — complicate matters. Harlan is arrested, and we learn that Cordelia’s apparent death was simply a ruse cooked up by her and her sister, Regan (Tehmina Sunny), presumably to oust their father from power. In a closing montage, we see Thomas, near death, get taken in by a large, mysterious vessel, and see Regan take her father’s seat.

2 thoughts on “Pandora Recap: You Can’t Handle The Truth”