Bluff City Law can’t help but invite unfavorable comparisons to its rival on CBS, and its verbose self-importance leaves it looking guilty as charged.

Bluff City Law can’t help but invite unfavorable comparisons to its rival on CBS, and its verbose self-importance leaves it looking guilty as charged.

You know how it is with legal procedurals — like buses, two can’t help but come along at once. This is bad news for NBC’s Bluff City Law, which will inevitably be compared to its — thus far, anyway — much superior CBS rival, All Rise, since they’re both weekly courtroom dramas approaching truth and justice from the same side of the moral divide. But whereas that show managed to tow the liberal line with humor and energy, Bluff City Law succumbs to po-faced seriousness and verbose posturing, spelling out its agenda — literally, on Post-It notes — in a way that can’t help but be grating.

The pilot’s script — by The Brave‘s Dean Georgaris — is awful, full of long-winded exposition and absolutely littered with empty platitudes and grossly overdone world-changing sentiments that are often punctuated with momentous pauses as if they’re building to punchlines — which I suppose they are, in a way. Bluff City Law Episode 1 presents us with obvious realities, such as people getting cancer as a result of big-business cover-ups being a bit of a bad thing, and then acts as though it has unfurled the Dead Sea Scrolls to reveal uncanny hidden truths. The responsibility of legal professionals and juries as forces of change shouldn’t be understated, but for this show, understatement of any kind is an entirely alien concept. A scene in which our protagonist is held in contempt of court is bookended by scenes of other characters describing her as being reckless and hot-headed. Thank goodness you let me know, Bluff City Law, I almost didn’t notice. 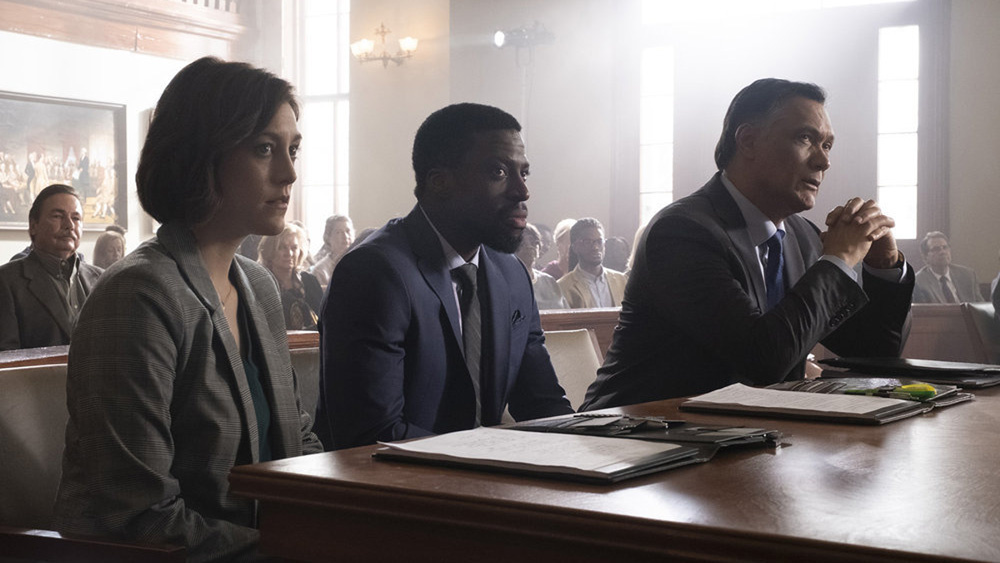 That protagonist is Sydney Strait (Caitlin McGee), a former cutthroat corporate lawyer who gravitated to the dark side of the justice system because it allowed her to sleep peacefully knowing she didn’t have to care about whoever she represented. But following the death of her mother — whom we never meet, even in flashback, though we know she was great because almost everyone Sydney runs into throughout the pilot tells her so — she goes back to work for the hot-shot Memphis-based civil rights firm fronted by her father, Elijah Strait (Jimmy Smits), from whom she has been estranged for a long time.

Bluff City Law Episode 1 has absolutely no idea what it wants to do with Elijah. He’s apparently a conservative but also a crusading civil rights advocate, and he’s also apparently a philanderer but has to work as the show’s wise moral center, so it’s just mentioned as flimsy backstory and never really amounts to anything. Neither, for that matter, do any of the pilot’s horribly overwritten meditations on responsibility, change, and legacy; notions that are explored in a way that is somehow both insultingly obvious and confoundingly incoherent at the same time.

A decent cast — supporting players include Michael Luwoye, Barry Sloane and Jayne Atkinson in various thankless parts — aren’t enough to keep Bluff City Law from allowing its tedious self-importance and amateurish verbosity to overwhelm it. There’s some feel-good potential in its cornball sentimentality, but on the grounds of taking itself far too seriously and treating its audience far too stupidly, Bluff City Law is guilty as charged.