Judy Review: Zellweger Soars Over the Rainbow in a Slightly Flawed Biopic

While Judy is a slightly flawed film, with its saccharine finale and underdeveloped supporting characters, Zellweger does give a towering performance, a career peak, some might even call it a rebirth, and unquestionably one of the year’s best.

While Judy is a slightly flawed film, with its saccharine finale and underdeveloped supporting characters, Zellweger does give a towering performance, a career peak, some might even call it a rebirth, and unquestionably one of the year’s best.

Let’s get one thing out of the way — the overwhelming hype you have heard about Renee Zellweger in Judy is absolutely real. She is stunning as the headlining star who got her start in the polite vaudeville shows that were more like a handful of episodes of America’s Got Talent. She could sing, dance, and good-old Louis B. Mayer looked at her like an ATM without a passcode. Garland was treated as a cottage industry, creating money and giving careers to everyone who crossed paths with her. The Judy film is a love letter to a fallen star who rarely gives warts and all depictions of substance abuse; in fact, it may be too respectful. It loads up heaps of empathy and compassion for the Hollywood legend, but it only scratches the surface, instead of a deep dig.

Judy folds flashbacks of her days as a teenage performer when filming Wizard of Oz (complete with a for-show relationship with a young Mickey Rooney) to 30 years in the future as worn-out, pill dependent, and alcohol-soaked has-been in the States. She is regulated to doing late-night shows in dive bars, locations that are seedier than she is used to while dragging her kids along for the ride, and even performing for their meals (but sometimes that doesn’t even come to fruition). She has three kids, one adult. The other two are pre-teens, has gone through four husbands (she comments that she took her failed marriages for depression, and it didn’t work), and essentially finds herself homeless. She drops off her kids at her ex-husbands’ house, Sidney (Dark City’s Rufus Sewell), who wants full-time custody during the school year. She can’t find enough work to pay off her debts and fight for her kids in the courts, but she remains popular in England, where a string of sold-out shows at the legendary Talk of the Town’s nightclub is waiting for her.

I’m not sure I would have recognized Renee Zellweger as Judy if I didn’t read about it before seeing the film; the Oscar-winning actress of Cold Mountain doesn’t only resort to a caricature, mimic, or perform a handful of mannerisms of the legendary performer as much as she becomes her. She, along with Rufus Sewell, honestly is unrecognizable here, and when you can disappear into character in a way that can’t possibly be hidden by makeup or wardrobe, that’s the ultimate compliment you can give any performer. She is moving, touching, while delivering deft comedic one-liners, who can communicate a single glance as she listens to a moving story of a pair of new friends she just met that tells you everything you need to know about what she’s thinking at that moment. It’s a towering performance, a career peak, even a rebirth, and unquestionably one of the year’s best.

Judy was directed by British television director Rupert Gold and adapted from the Australian stage play “End of the Rainbow” by Peter Quilter. While his latest is a marked improvement over his directorial debut, True Story, it does have its flaws. For instance, the supporting characters, like Jessie Buckley’s Rose Wilder, are not developed enough to go along with the narrative the film tries to portray as caring colleagues that don’t ring true; this goes against the underlining theme of not fake friends, false relationships, and staged moments for media press releases in order to use Garland’s fame for their financial gain. Buckley is a fantastic performer and it feels like the role was slightly expanded while being used to validate Garland as a beloved performer, but it doesn’t ring true. Neither does the supposed whirlwind romance of her love interest, play by Finn Whitlock, that could be summed up like an uninvited houseguest. 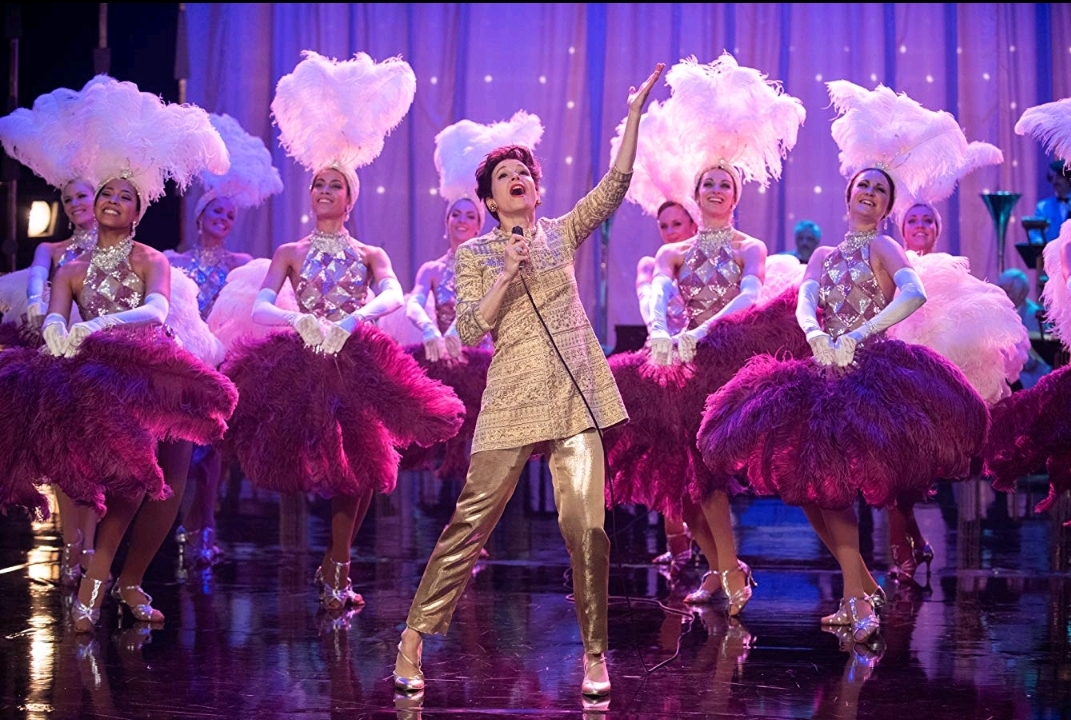 Quilter adapted his screenplay, which is a problem that not only is he is too respectful of its start, refusing to look past the surface of Garland’s substance abuse, he is also too respectful of his own material by not expanding on his work, boxing himself in in the process. The flashback scenes involving Michael Gambon (Gosford Park) as Mayer have a haunting quality to them, even shocking, alluding to a casting couch situation. Staff were hired to watch over Garland as well, dispensing uppers and downers like a pharmacist to keep her weight down, while having her to be able to trudge through 18-hour days — a type of child labor laws that can easily be worked around when huge conglomerates get involved.

It’s the adult substance abuse scenes with Garland that never reach the heights of a J.K. Simmons in the film I’m Not Here, the once unseen face-first fall of a Taron Egerton in Rocket Man; it has much more in common with a film like Beautiful Boy, which doesn’t show the physical toll that a prolonged use of alcohol and drugs can take on one’s body. While Quilter’s character study does depict Garland with obliterated sleep patterns, loss of appetite, and a slight hyperactivity, there are no basic signs of cold, sweaty palms, or shaky hands (when they celebrated Garland with a firework show in the rehearsal hall, Judy watched from the second-floor balcony, must have been intentional, since her alcohol-soaked body would have surely gone up like kindling). Most films fall short of this, so this is nothing new, and not everyone has the guts to do what Nicolas Cage did in Leaving Las Vegas.

Judy, overall, is an above-average to a good film that’s not cohesive, needing an extra scene or two to establish a connection with her team at the Talk of the Town. While the ending is a little too over-the-top and saccharine for my tastes, there are more positives than negatives here to work with and will satisfy the most brassbound Judy-heads. The film is worth seeing based on Zellweger’s career-best performance alone, that will surely land her an Oscar nomination, if not a second statue to go on her mantle.