Sea of Shadows Review & Interview: A Gripping Nature Doc Acting As A Wave Of Awareness

Richard Ladkani’s gripping new documentary Sea of Shadows makes you hyperaware of injustices and inspirations, and a massive battle that nobody knows about but everybody is losing.

Richard Ladkani’s gripping new documentary Sea of Shadows makes you hyperaware of injustices and inspirations, and a massive battle that nobody knows about but everybody is losing.


We were fortunate enough to speak to Richard Ladkani about his new film Sea of Shadows, produced by Leonardo DiCaprio. What follows is our review of the film and a transcription of that conversation.

There’s been a collective wave of worry regarding the environment in the past six months. It’s a wave that has been building in momentum for years, and feels to have peaked with a blazed Amazon rainforest and a growing concern over the significant melting ice caps. We hear story after story about the grand effects of climate change, of environment impact, and of our imminent future. I find myself intoxicated by it, consuming as much information as I can only to black it out over the course of the following days.

Richard Ladkani’s gripping new documentary Sea of Shadows forces you to remember how our environment is currently being affected. Made in partnership with National Geographic, who is fresh off its win for Free Solo, this film zeroes in on the Sea of Cortez and its neighboring region of San Felipe. The film is Ladkani’s follow-up to The Ivory Game and his second collaboration with actor-turned-producer Leonardo DiCaprio.

Sea of Shadows uses its runtime to discuss the vaquita, the world’s smallest whale which is dangerously close to extinction. At the beginning of the film, there are less than 30 vaquitas in the world. The stakes are set, and the ticking of the clock begins.

It’s a tense film that holds nothing back in criminalizing the activities of its anti-heroes. Journalists face-off with local fishermen, both legal and illegal, the Mexican government, which seems apt to solve the problem by waiting, Mexican cartels, and the Chinese mafia. It tackles a complex, wide-ranging problem with the grace of a big blue whale, gliding from topic to topic with footage that seems too heartbreaking to be real. Vaquita are dying and seemingly everyone is losing in the battle.

Illegal fishermen are using illegal gillnets to attempt to catch totoaba, a rare fish with a bladder that is said to have healing properties. These fishermen sell totoaba bladders to Mexican cartels, who then work with Chinese mafia members to smuggle the fish into the country, selling them to buyers on the black market. It’s a lot to take in, and it’s told by Ladkani in a fast-paced style, that of a spy thriller.

The film follows the Sea Shepherd, a ship dedicated to pulling up these illegal nets, as well as the efforts of prominent journalists and scientists.  A shadowy and haloed cast of characters is presented to us in a quickfire fashion, giving us little time to question. We’re getting tugged in each direction, resting our attention long enough on each group to see them either destroy the environment or struggle mightily to save it.

There are plenty of memorable scenes in this film, from the rescue and death of a female vaquita to the nightly routines of Jack Hutton, the drone operator on the Sea Shepherd. Collectively though, they make for a special watch. They combine to create a film that imprints itself upon you, tightening with tension until you’re exhausted as the credits roll.

Sea of Shadows makes you hyperaware of injustices and inspirations. This is just one instance of environmental gain. The documentary suggests this is happening all over the world. The vaquita are just one battle that people are fighting and unfortunately losing.

I’m heartbroken. I’m angry. I’m fascinated. I’ve been sucker-punched by a film that was more gorgeous than most. Most of all, I’m just glad that we’re still fighting. 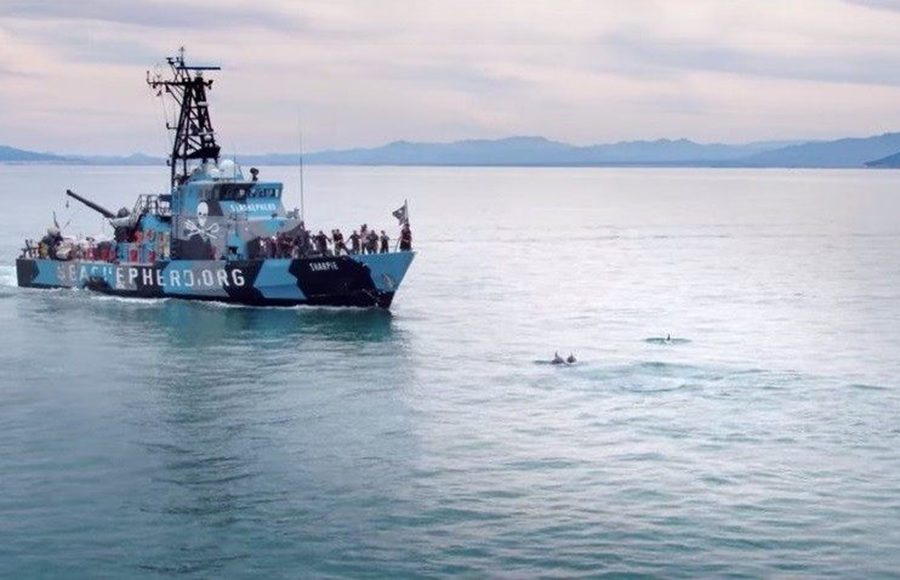 Below is an interview conducted with director Richard Ladkani and Sea Shepherd drone operator Jack Hutton. The interview has been edited for length.

Michael: For someone like myself who didn’t know that this situation in the Sea of Cortez existed, how would you describe the film you made on this ongoing issue?

Richard: It’s about the destruction of an ecosystem, by gangs, and Mexican cartels, and Chinese mafia, with the most prominent victim being the smallest whale on earth, where less than 15 remain. But the takeaway should be that it’s a symbolic story for what’s happening to our planet. This is happening everywhere around the world with our environment, where it’s being exploited for money and greed.

Michael: Jack, how did you first hear about this project and how did you decide to go down there and make this part of your path, your mission?

Jack: Yeah, I’m a pretty young dude, I’m 22. One of the most interesting things about me being 22 is I was born in 1997. In 1997, there were 600 vaquitas. Now there’s less than 15. That’s a 97.5% decline in the number of vaquitas in my lifetime. This isn’t just mirrored in vaquitas, this is mirrored throughout our planet. In the last 22 years, we have lost one-quarter of our wildlife worldwide… I was in university and I was studying aerospace engineering and I had been a sailor before. I was studying for a future career I did not have. What was the purpose of me going to go get a career in a planet that was dying? I felt that I needed to go do something. I dropped out of university, signed up with sea shepherd, and then on my first day, I was sent to San Felipe. And I had to crawl through the carcasses of sixteen dead baby sea lions caught in the gillnet that was meant for totoaba… This war that we’re in, in our little ship in the middle of the Sea of Cortez is a symbolic war for the entire planet.

Michael: Richard, how did you first hear about this issue?

Jack: I was approached by Leonardo DiCaprio, and he asked if we could do a film about the vaquita. We had done the film The Ivory Game together and helped ban the ivory trade in China. He wanted to collaborate further, as did we of course. When he told us about the vaquitas and his willingness for the project and to open doors and to be there to promote it and push it on social media, it took maybe 24 hours to think it through. To be honest, I had never heard about the vaquita and I had never heard about the totoaba. This was all new to me. The only thing I was worried about was if nobody, like me, had ever heard about this species, who was going to care? DiCaprio alleviated those concerns, because he said, well look if I put this out on Instagram, and I have 35 million followers, 35 million people will know what the vaquita is.

Jack: It’s a dangerous thing just by the nature of going out to sea on a ship. People have died just doing that. On top of that, the fact that you’re fighting against organized crime. And everybody has guns. And you’re posing a real financial threat to the cartel… The reality is that it’s a necessary risk. At this stage of the game, we have a moral obligation. We need to be willing to put ourselves in front of this organized crime industry… We have said so. We have said that we’re going to stand in the way of it. If you say you’re going to stand in the way of something, you don’t jump out of the way at the last second when it gets hairy and rough. You have to continue to stand in the way… Since the film ended actually it got a lot more violence. We got shot out. We got boarded. All our stuff was stolen, we got raided. But we’re still there.

Michael: I felt very moved by the film and I’m sure a lot of other people who see it will as well. What can the casual viewer do to help the cause?

Richard: One very important thing is for people to start talking about this. We need a public, real, big, global movement that shows the Mexican people and government that the world cares. We have a petition on Change.org to save the vaquita, which has an action plan. Every signature sends an email to the environmental minister, just to show the international community cares. I’m a filmmaker, I chose this as my tool to make a difference out there. Wake people up, shake people, move them, and inspire them. Anybody can look around, and should look around, what can I do to make a difference?