Fear the Walking Dead Recap: Thank Goodness That’s Over For A Bit

“End of the Line” was, predictably, a complete nonsensical mess of a finale, its only saving grace that it brought the show to a merciful, albeit probably temporary conclusion.

“End of the Line” was, predictably, a complete nonsensical mess of a finale, its only saving grace that it brought the show to a merciful, albeit probably temporary conclusion.


This recap of Fear the Walking Dead Season 5, Episode 16, “End of the Line” contains spoilers. You can check out our thoughts on the previous episode by clicking these words.

In the opening scene of “End of the Line”, Fear the Walking Dead‘s fifth season finale, Dwight (Austin Amelio) staggers through the woods in desperate search of a better show. Doesn’t find one, obviously. What he finds instead are horses, abandoned, wandering around near the charred remains of the convoy that has reliably carried our Scooby gang around on their happy-clappy adventures. Those adventures are now mercifully, albeit probably temporarily, over. And this woeful episode only confirms how much Fear the Walking Dead needs the break.

Following on from last week’s ill-advised trek to Humbug’s Gulch, “End of the Line” finds Morgan (Lennie James), having shelved his pride in order to radio Virginia (Colby Minifie) for help, trying to negotiate terms. He wants her to take in everyone; she only has use for the able-bodied, not the sick or old or wounded. He wants everyone to be kept together; she demands everyone goes where she wants them, which will be determined to ensure the highest number of lives saved. It’s time, she says, for Morgan to make “a hard choice”. None of this makes any sense at all. Why would splitting up the convoy group save more lives than keeping them together? Why wouldn’t she just lie to Morgan and say sure, whatever, then betray him at the last minute, since that’s pretty much exactly what she does anyway? And why, after spotting Humbug’s Gulch from a nearby hillside and seeing it was completely overrun with walkers, is the group now right in the middle of the place?

Whatever. Grace (Karen David) doesn’t think Virginia will take her since she’s dying of cancer, and she warns Morgan this is something he’s going to have to deal with, but in true Morgan fashion, he just insists he won’t let it happen. In the nick of time, Dwight returns with the horses he found in the prologue, and it occurs to the group that Morgan might not have to let that happen after all. Besides, if there are horses nearby, that means there’s water, too, meaning Virginia was lying about the place being beyond repair, which they for some reason just completely took her word about. A new plan is hatched. Using the horses — just enough for the main cast, and don’t worry, they can all ride them really well — they’re going to lead the herd up the road and sic it on Virginia as she arrives. Genius!

Surprising absolutely nobody, “End of the Line” sees this plan go horribly wrong. First, Virginia turns up with Luciana (Danay Garcia), so the gang can’t set the herd on her. Doh! Then they realize she’s going to commandeer the SWAT van, but don’t worry, since Daniel (Rubén Blades) has sabotaged it and brought the starter with him. By the way, do you remember Daniel in Season 3, when he was a stone-cold assassin and not a stupid man who carries around a cat named Skidmark and allows Strand (Colman Domingo), who is openly conflicted about whether to accept Virginia’s deal, to “look after” the essential part that will allow her to turn the SWAT van against them? I do too. I wish the writers would. 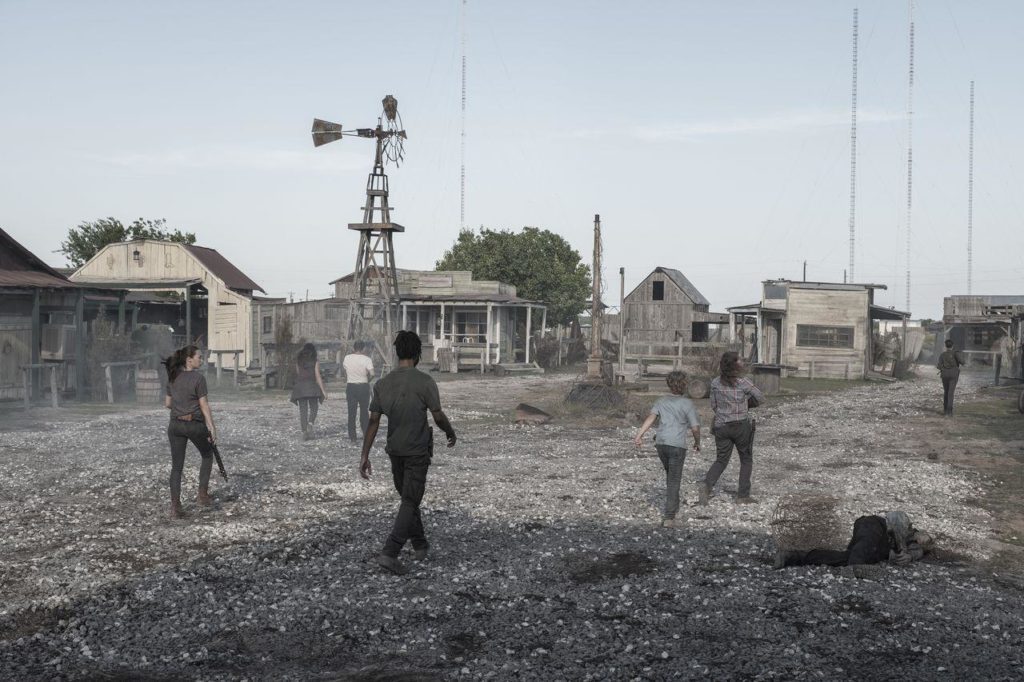 This all leaves the rest of the gang trying to corral a herd that they suddenly have no use of, which ends predictably. Dwight goes into heroic self-sacrifice mode despite having loads of space to just run away, but Morgan, John (Garrett Dillahunt) and June (Jenna Elfman) have other ideas, leading the herd into nearby water so they’re all swept away. Everyone laments not having the means to take on Virginia anymore, despite having already established that they couldn’t use the herd to fight her anyway. It’s ludicrous.

Even more ludicrous: Back at Humbug’s Gulch, Al (Maggie Grace) finds some settler insignia on some corpses, and deduces that Virginia’s people got into a fight with the residents of the Gulch when they wouldn’t agree to terms, thus explaining where the horses came from. This is presented as something of a twist. Are we really supposed to be surprised that Virginia is lying here? All we’ve seen her do is lie and murder people for no reason. Why is anyone surprised by this revelation? It doesn’t make any sense at all. Anyway, the gang once again resign themselves to giving up, but they also decide that they have enough time before Virginia arrives to live how they intended to — which means John and June are going to get married.

“End of the Line” contained almost nothing but stupid moments, but the wedding stood out because it wasn’t just stupid — it was also offensively saccharine. Dwight gives them his rings and an idiotic speech about how he won’t need them, and John’s doesn’t fit on his finger. Oh, how we laughed. Daniel and Grace sing another duet. At this point, I was more than ready for Virginia to just march in and massacre everyone, which is just about the only ending that would have brought the audience any catharsis. No such luck. She arrives, in the SWAT van no less, and has another argument with Morgan about who is eligible to go and who isn’t. She eventually lets him have his way. Everyone can come to be settled, including Grace, but they don’t get to decide where they go, which means we have to endure loads of tedious farewells and promises of finding ways back to each other like ICE raided the place. Nonsense. Morgan finds himself left behind, at which point Virginia shoots him. Then she tries to shoot him again but the gun jams, and then she just inexplicably leaves him alive. At some point during this sequence, the doctor who took Grace away radios in to say she isn’t sick — she’s pregnant, the symptoms of which apparently overlap with those of radiation-induced cancer.

Thanks to whatever inexplicable moon logic the show is operating on at this point, Morgan sees Grace’s pregnancy as some kind of ultimate victory. Having proudly toppled Virginia’s ideology, he’s happy to just sit there and allow the approaching walkers to feast on him, but not before giving a long-winded speech on the radio imploring his compatriots to go on living. “End of the Line” doesn’t confirm whether or not Morgan gets eaten, though it’s difficult to care either way. For what it’s worth, I hope we never have to find out.