“You Don’t Need A Weatherman” draws explicit parallels between corporatism and gangsterism amid more family drama.

“You Don’t Need A Weatherman” draws explicit parallels between corporatism and gangsterism amid more family drama.


This recap of Bluff City Law Season 1, Episode 2, “You Don’t Need a Weatherman”, contains spoilers. You can check out our thoughts on the previous episode by clicking these words.

Another flagrantly shady corporation is on the stand in NBC’s Bluff City Law Episode 2, “You Don’t Need A Weatherman”, and you know what that means: More courthouse speeches from Sydney (Caitlin McGee) set to melancholy music. Ladies and gentlemen of the jury, vote accordingly.

In a way, Bluff City Law weakens its argument against corporations by having its characters take on ones like Terennial, a mustache-twirlingly evil company who entrap farmers by providing them with cash incentives and genetically-modified, patented seed, and then claiming part of their harvest. When they can’t pay, they take it away — and quite literally. Though that’s after harassing these humble blue-collar citizens with hired henchmen, just so they get the message.

The problem for the team in “You Don’t Need A Weatherman” is that this is, at first glance anyway, quite legal. But Sydney and Elijah (Jimmy Smits) determine that since Terennial explicitly operates like a gang, the best way to go after them is using Racketeer Influenced and Corrupt Organizations (RICO) law. The response is the classic RICO defense, which is to pin all the blame on a lone individual who has ostensibly gone rogue — this is the defense broadcast to the media on the courthouse steps by Terennial CEO Tucker Goodman (James McCaffrey) while continually insisting that “farmers matter”, just in case you were worried that Bluff City Law was running the risk of being too subtle.

Luckily the attorney general was already investigating Terennial’s heavy and tapping his phones, so there is recorded evidence of Goodman warning him to flee — witness tampering, in other words, so the A-plot of Bluff City Law Episode 2 is able to be tied up quite neatly without much fuss. Indeed, much of the episode isn’t even devoted to this story strand at all, but instead a secondary case about a stolen recipe for barbecue sauce and the on-going inter-office politics, which have been exacerbated by the fact that Sydney now knows she shares an office with her father’s “secret love child”, Emerson (Stony Blyden). 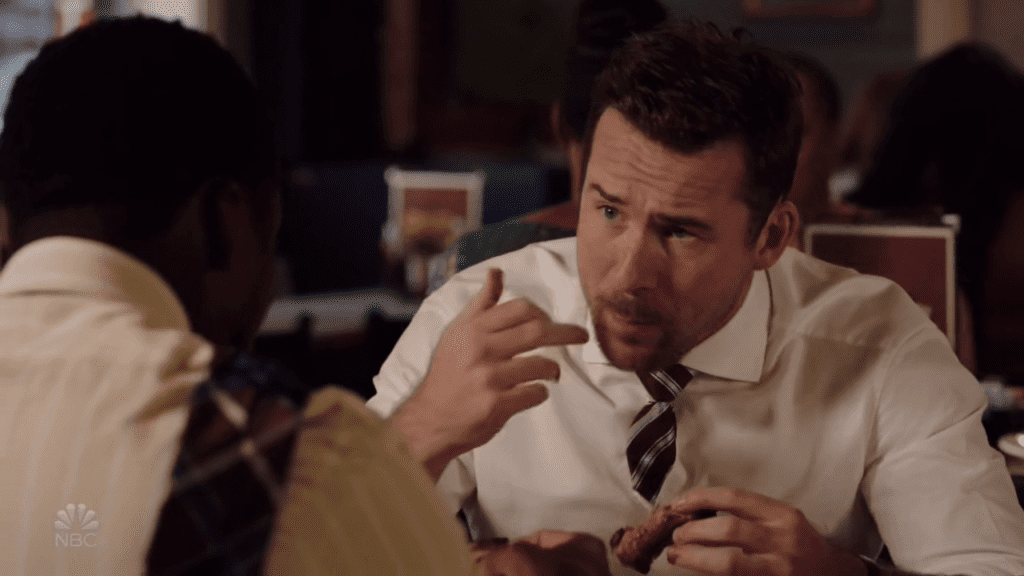 Anthony (Michael Luwoye) and Jake (Barry Sloane) handle the B-plot on behalf of the proprietor of a beloved local chicken spot, whose brother is looking to start up his own competitor with the pilfered BBQ recipe. The problem is that a hastily-scrawled contract exists on the back of some paper that declares fifty-fifty ownership of everything, but since it was simply signed by “Coop”, the owner’s nickname, it doesn’t remain a problem for long. The actual legal ownership of the business declares that the recipe is not to be shared, but Anthony and Jake reunite the brothers after the case anyway so that they can make amends.

As for the familial drama, “You Don’t Need A Weatherman” reveals that Elijah’s secret love child might not have been so secret after all. Sydney’s mother knew about Emerson, which helps her to soften to the idea that he’s going to be around. Elijah was desperate to reconnect with his estranged daughter when he found out he had another child whose entire life he had missed — ladies and gentlemen of the jury, what would you do in a similar situation?

Okay, probably not employ the kid in your legal office. What does Emerson even do there? But you know what I mean.