This recap of Pandora Season 1, Episode 12, “Knocking On Heaven’s Door”, contains spoilers. You can check out our thoughts on the previous episode by clicking these words.

In Greek mythology, Pandora’s Box contains all the world’s evils; in this show, it contains all the most indulgent sci-fi-tropes and pop-culture knock-offs. “Knocking on Heaven’s Door”, the first half of a two-part finale, plays like a greatest hits album for a band that was never any good to begin with.

Pandora Episode 12 is so inelegantly stuffed with seemingly last-minute ideas for scenes and plot swerves that you spend half the episode wondering if you missed the previous one and the rest of it wondering if any of it is to be taken seriously. If it was funny it could pass as a joke at the expense of low-budget overambitious sci-fi. But it’s not funny, so if there is a joke here it’s only aimed at itself.

The funniest thing is how quick “Knocking on Heaven’s Door” is to introduce new characters or re-contextualize old ones. Professor Osborn (Noah Huntley) goes to see Pandora, who is apparently not Jax (Priscilla Quintana) but someone else, though also maybe Jax as well? And it turns out that Professors Pevney (Tommie Earl Jenkins) and Shral (Vikash Bhai) knew all about Jax’s true nature, just so we can get the whole faculty involved. Harlan Fried (Luke Fetherston) is enjoying his new youthful clone body so much that he enthusiastically deploys Leone Vokk (Manu Bennett), a weird assassin who’s a stickler for pronunciation, to hunt down Jax, and he also makes reference to an older daughter named Odessa who would never betray him, which is later revealed to be Tierney (Tina Casciani). I suppose there’s a resemblance.

Ralen (Ben Radcliffe) is back on Zatar with Matta (Amy McPherson) in Pandora Episode 12, spending most of his time indulging in strobe-lit topless fistfighting to keep his Jax-boner under control. But as soon as he learns that there’s an alien fleet on the way to Earth and that his father has no plans to intercept it, despite the new Zatarian fleet having apparently been built entirely to do so, he naturally sets out on his own. Call me cynical, but I don’t think his marriage is going to last. 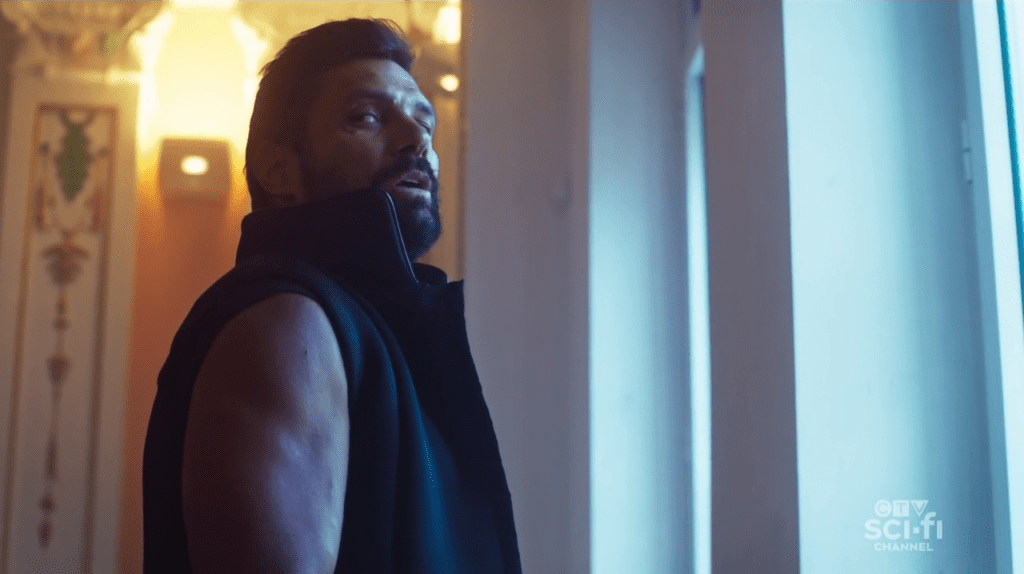 Thomas (Martin Bobb-Semple) is still sulking about his long-lost dad, so he reads Tierney’s mind and learns of an asteroid full of safe deposit boxes that really deserves far more explanation than it gets. He says he’s leaving and Tierney just… lets him go since she’s too busy to bother — Regan (Tehmina Sunny) has hired her Hypatia Syndicate to capture Jax anyway.

Atria Nine (Raechelle Banno, now blonde) is on Adar with Pilar (Banita Sandhu) to start a grassroots political campaign to run for the position of Seeker, much to the annoyance of current Seeker Hubbell (Jonathan Kerrigan), who still considers the clones as soulless property. When he tries to break it all up and arrest Atria Nine, there’s a hilarious Spartacus moment where all the clones — including the bloke, for some reason — claim to be her. Ridiculous, but charming in its way.

But anyway. Much of “Knocking on Heaven’s Door” is devoted to Vokk’s pursuit of Jax across campus, which plays like a weirdly underlit Terminator homage during which Vokk inexplicably repeats Jax’s name over and over again while slowly walking or hiding around corners. Shral tries to fight him off with a shank hidden in his pimp cane, and then Pandora — the other one — shows up and fights him off easily. Osborn throws the Golden Snitch at him and Xander turns up with a load of guns, but still, he persists. When the entire Earth fleet is destroyed, dork ex machina Elias Wilson (Phill Langhorne) shows up to lead them through some secret tunnels to a monorail and a… space elevator, I guess? He’s shot on the journey and Jax cries. Pandora lags behind to fight Vokk, whom she suddenly can’t beat anymore, and she sends them both through a swirly purple portal.

Osborn, having stolen Vokk’s ship, heads out to lead Earth’s armada against the alien invaders, blatantly plagiarizing Winston Churchill’s “We will fight them on the beaches!” speech. Ralen arrives to help in the fight, and just as the battle looks lost, Matta turns up with the entire Zatarian fleet, despite having apparently not consulted Ralen’s father about it. I guess she just commands the entire Zatarian military? Whatever.

In the nick of time, the Hypatia Syndicate arrives. Tierney takes Jax and Xander to Harlan, arrests Regan and Cordelia (Isabelle Bonfrer), and reveals herself to be the enigmatic Odessa. Oh, and Thomas gets stuck in that safe deposit asteroid, which was a trap all along. I knew it sounded too good to be true.

1 thought on “Pandora Recap: Only Serial Killers Like Poetry”