Pandora Recap: Simple Is As Simple Does

“Simple Twist of Fate” was anything but, as the story refuses to end with the season.

“Simple Twist of Fate” was anything but, as the story refuses to end with the season.


This recap of Pandora Season 1, Episode 13, “Simple Twist of Fate”, contains spoilers. You can check out our thoughts on the previous episode by clicking these words.

There wasn’t much simplicity in “Simple Twist of Fate”, the second half of Pandora‘s two-part finale. It was kind of a mess, actually. But following on from its chaotic setup episode that’s to be expected. Even so, Jax (Priscilla Quintana) waking up in some kind of idyllic 50s suburbia with Greg (John Harlan Kim), of all people, working on a car outside was a bit of a shock. It quickly became apparent in Pandora Episode 10 that this was all some kind of simulation staged by Tierney/Odessa (Tina Casciani) and Sarika (Carla Woodcock), for some reason, to try and force Jax into using her portal-opening powers so they could figure out how to make a portable version for themselves. They tried having her wake up in an asylum — under the care of Dr. Regan Fried (Tehmina Sunny) — and killing Xander (Oliver Dench) in front of her, but nothing worked. The solution was her beloved late mother. As soon as she was programmed in, the portal swiftly followed.

In the present-day — though I suppose it’s technically the future, but who’s counting — Jax and Xander have been missing for quite some team. Osborn (Noah Huntley) and Ralen (Ben Radcliffe) become best friends and “Jax”, though really Pandora, but not the one from the previous episode, turns up to get into a fight with them. They get the better of her and lock her up, where Ralen quizzes her as she does that played-out “humanity isn’t worth saving” routine that you always get when sci-fi villains have to explain their motivations. Earthlings destroyed ourselves and let YouTube “influencers” gain a foothold in popular culture, so we’re only worthy of destruction. It’s hard to disagree, really. 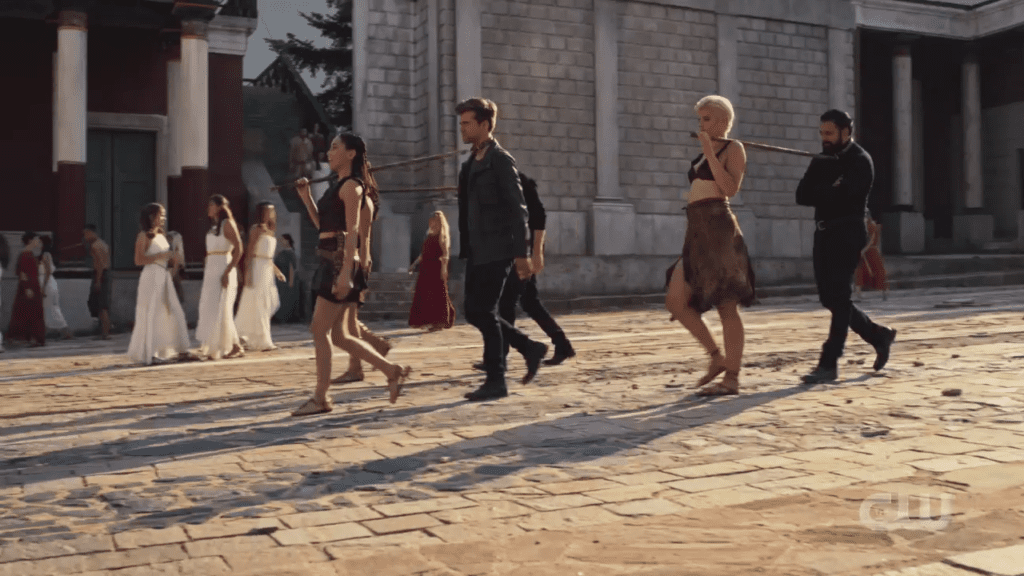 Harlan Fried (Luke Fetherston), having been put in his place by Odessa, who apparently isn’t so loyal after all, calls Osborn and tells him that Jax and Xander are on Hypatia Prime. He heads there with Shral (Vikash Bhai) to stage a rescue and conveniently arrives just as Xander has broken himself, Regan and Cordelia (Isabelle Bonfrer) out of their cells. Together, along with Ralen and Matta (Amy McPherson), they all rescue Jax, but Odessa is able to escape through a homemade portal, where we see her have a chat with a captive Pandora.

On Adar, Atria Nine (Raechelle Banno) and Pilar (Banita Sandhu) are still trying to take down Seeker Hubbell (Jonathan Kerrigan) in “Simple Twist of Fate”, now with the help of Professor Pevney (Tommie Earl Jenkins), who has “friends in the resistance” or somesuch. It’s going well, but a traitor in their group conspires against them, and Atria is forced to publicly withdraw her candidacy while Pilar livestreams it. But! Thomas (Martin Bobb-Semple) turns up — if it was explained how he escaped from that asteroid trap I obviously missed it — and the whole thing is revealed to be part of a plan. Atria Nine is really in the crowd, and Pilar recorded Hubbell being a cartoon villain. So all is well. Atria and Pilar decide to stay on Adar, Thomas goes to find his father, and Xander, literally seconds after Odessa escapes, decides he’s going to take Jax on holiday.

But there’s one more thing in Pandora Episode 13. Ralen leads Jax outside on Hypatia Prime to reveal that Greg, the bloke who died in, like, the third episode, is still alive! Dun dun dun! I for one cannot wait for Season 2, though of course there’s always a chance that I’m being sarcastic, which is a possibility we should probably consider. Either way, there will be a Season 2 since The CW is seemingly incapable of canceling anything. I’ll see you then.

2 thoughts on “Pandora Recap: Simple Is As Simple Does”