Home » TV » Almost Family Recap: The Holidays Are Going To Be Awkward

Almost Family Recap: The Holidays Are Going To Be Awkward

This show is almost certainly a bad idea, and the fact it doesn’t seem willing to address that possibility is more off-putting than even its misguided premise.

This show is almost certainly a bad idea, and the fact it doesn’t seem willing to address that possibility is more off-putting than even its misguided premise.

The premise of Almost Family (Fox), and I swear this is true, is that Leon Bechley (Timothy Hutton), a very well known fertility doctor, stocked his clinic with his own genetic material and foisted it on unknowing clients, some of whom are friendly — perhaps too friendly — with his grown-up daughter, Julia (Brittany Snow). Thus, she has a large number of half-siblings she never knew about — and her getting to know them is what Almost Family Episode 1 posits as a kind of uplifting meditation on the nature of family.

This gonzo and thoroughly misguided premise is and will remain a terrible idea whatever way you slice it, but it would have been perhaps more tolerable had Almost Family seemed to have any intention of addressing how uncomfortable it is. Alas, it doesn’t, failing to really commit to a stance during the pilot, and playing the revelations off as awkwardly comedic or mawkishly sentimental. Virtually none of it works, besides perhaps the suitably flabbergasted performances, especially Snow’s. 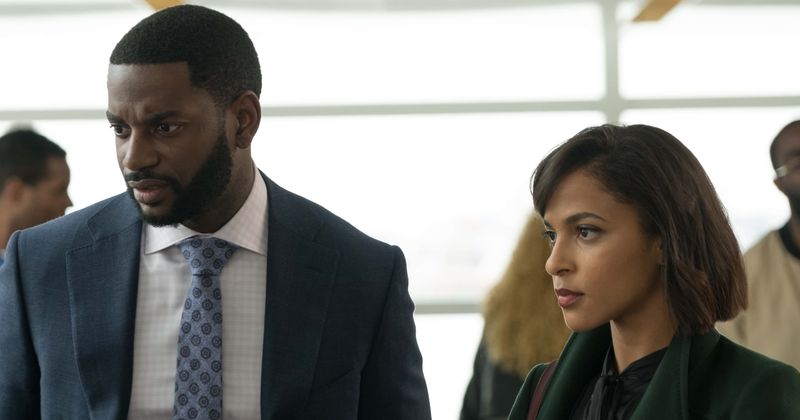 Julia’s potential relatives, introduced in Almost Family Season 1, Episode 1, include Edie Palmer (Megalyn Echikunwoke), Julia’s man-stealing rival who just so happens to be a lawyer — Leon, by the end of the pilot, is set to stand trial for his actions, as well he should — and Roxy Doyle (Emily Osment), an arch and grating caricature of an internet influencer who has been so exploited by her parents, Ron (Timothy Busfield) and Diane (Victoria Clark), that she considers a new sister and a new father the best thing that’s ever happened to her.

This is material that demands a complex treatment it can’t possibly get on network television, so all its edges have been planed away in service of a palatable mainstream appeal. But it doesn’t really have that since the direction and writing are so limp, so “safe” that there isn’t enough moment-to-moment pleasure to distract from the underlying ickiness of the whole enterprise. You’re forever wondering why certain details aren’t being explored more, why characters are behaving in such a way, and who came up with this idea in the first place.

Almost Family is obviously intended as an exploration of consent, exploitation, culpability, and family, but it isn’t any of those things yet — and more worryingly, at least in the pilot, it hasn’t expressed any desire to try harder at being them. It’s a confounding show with an extremely bizarre setup and a wavering tone that really does seem incapable of unpacking its own foundations; that makes it cynical, and faintly desperate for attention that it doesn’t deserve.