Vampire State Building is a new title from Ablaze comics, written by Ange and Patrick Renault with art by Charlie Adlard. The company is particularly pleased about having Adlard onboard, and have used this in the advertising, and as the banner over the top of the cover. There is even a reference to The Walking Dead in the script, just in case we forget that Adlard was the artist on that title for many years.

So there are a few apparent influences on the first issue of this horror base-under-siege comic, and I would wager the writing team are fans of John Carpenter movies. We get a few nods to some classics here, mainly Assault On Precinct 13 and Prince Of Darkness.

Vampire State Building #1 introduces us to the main characters, namely a group of friends meeting at the Empire State Building after Terry announces he’s off to Afghanistan. Cousin Ashley is throwing a bit of a going-away party gathering a few friends together to give Terry a proper send-off. Meanwhile, there’s a spot of renovation going on in the building, and of course, something has been disturbed that would have been better off being left undiscovered. The local homeless people are becoming active, rushing the building, and it’s not long before all hell starts to break out, with our assembled cast stuck in the upper floors with the rest of the poor tourists that did not expect anything like this to happen on their visit to New York.

Vampire State Building #1 is quite nicely paced; the first act quickly explains who these people are, and then it’s straight to the mystery. By page 12 we get our first look at the creatures that are storming the building, and the action escalates nicely. 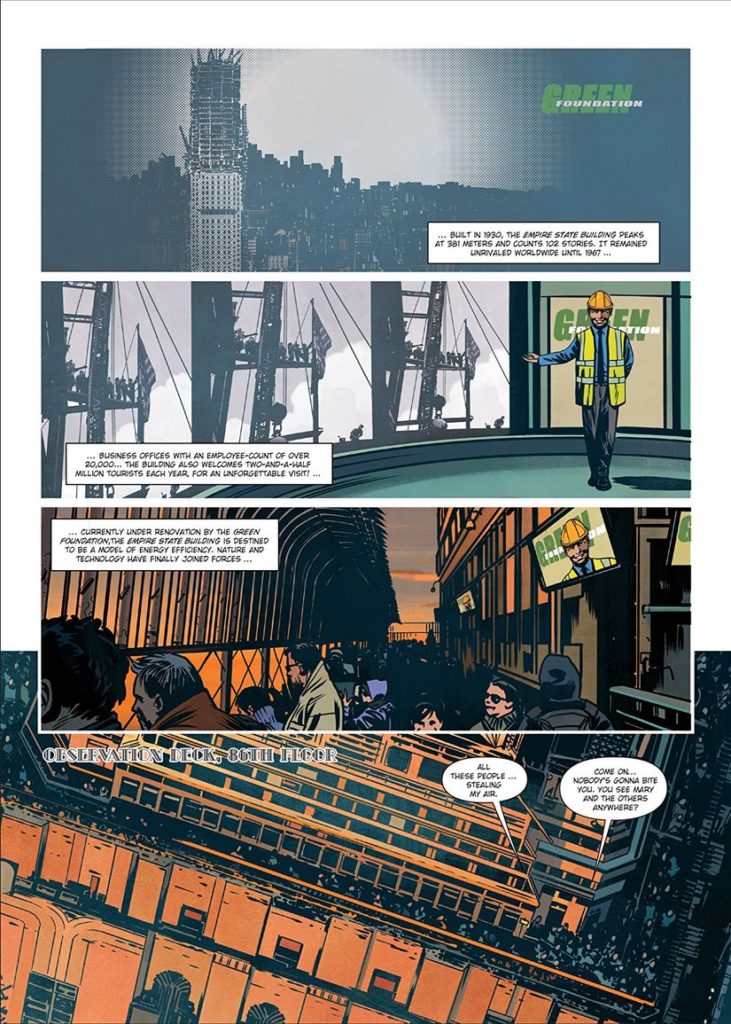 I imagine that other writers may have saved some of the bigger reveals for future issues, using the premiere issue to build suspense and mood before showing the villains attack on a final splash page, but thankfully the team here waste no time getting to the action.

By the end of the issue, everything is set up for the rest of the story to unfold, and I am assuming this is a mini-series, as I’m wondering how the creative team will be able to string this out for more than another three issues. The good news though is that it’s a nice idea that has some great art and dialogue and although the whole thing smacks of hoping for a Netflix deal, I will be picking up the second issue when it hits the shelves.

Adlard is such a pro at this kind of storytelling that he could probably do it in his sleep, so I’m hoping that the writing team keep up the pace and deliver a tight and terrifying story that lives up to its first outing.

If you are thinking of picking this up, can I suggest grabbing the Sad Lemon Comics variant by Alan Quah? It’s a swipe of the classic Blade cover from Tomb Of Dracula #10 and looks brilliant.